Keeping consumers and producers happy can be tough.  Shoppers can be a hard bunch to please – and of course they’re always right!

Small producers aim to please, yearn for success and very often get swallowed up in their attempts to make it with what they love doing most.

A nifty initiative that is beginning to grow around Co Galway is your local market and delivery basket all in one- and best of all, there’s no pushing a trolley, getting caught in the rain or searching for a parking space.

Larder 360,an online platform for local producers, showcases and supplies an ever-increasing range of local food products and delivers them in a perfectly packed and chilled coolbox directly to the shopper’s home or place of work.

One of the main Larder delivery boys is a cheerful Canadian Bill Organ.  A different part of the business world brought him from Nova Scotia to Galway, but having changed his focus a while back, he wandered in upon Larder 360 and has become more actively involved in recent month.

Bill’s reluctance to take breaths in between his words of enthusiasm for the project is testament to his passion for the concept.

There’s a similar passion continuing to drive a stalwart supporter of local food – the Friendly Farmer Ronan Byrne – who was among the first to sign up to the coolbox scheme.

“Some of us have tried different things before and have never managed to get past the idea.

“As a small producer we can’t be on every shop shelf or have a stall at every market throughout the county.  Larder 360 lets us do what we do best and they are the connection with the buyer,” says Ronan, who believes that even in the short few months of the scheme’s operation it has increased his business.

Convenience for the shopper and the producer is key.  From Castlemine Farm pork chops to seaweed and from craft beer to granola, there are some 20 producers responsible for 175 products available through Larder 360.

Feedback on the product range as well as ordering, deliveries and everything else the customer wants to voice an opinion on is continually being used to tweak the system.

Because Bill usually delivers the coolboxes in person, the opportunity for customers’ comments is pretty instant.  If something goes wrong, he hears about it face to face.

Orders are taken throughout the week and so far there are two delivery days – Tuesdays and Fridays but weekends may also be looked at as demand grows.

In Just a few months of operation there is a steady customer base of about 45-50 deliveries each week and the aim is to increase that to 200.

As the business grows, there will be opportunities for more drivers who might be interested in particular delivery routes and areas that suit them.

But Bill isn’t just dropping the coolboxes to front doors, the numbers going to large workplaces such as Boston Scientific, IBM and even the GMIT and NUI Galway are on the up.  Because the produce is freshly sourced and packed just before delivery, it will remain cool and fresh for a number of hours – there’s no risk of food spoiling in the boot of your car.

And the delivery charge is very reasonable – €5 no matter where you are in the county, but you can also arrange to collect your Larder 360 box from its hub in Oranmore.

Ronan, who started work on his pasture-reared poultry business back 2007, knows how tough, frustrating and deflating it can be as a small producer.  But his doggedness and dry humour means he and his feathered flock are hard to resist.  He even manages to get this veggie-lover to visit now and then to give me tips on how to roast the family Sunday chicken”

And I’ve found a similar experience with the many other local producers around Galway we’ve met.  They believe s much in their product, it’s impossible for that not to rub off on you as a customer.  While there isn’t that one-to-one connection with the producers through the Larder 360 scheme, that feel-good connection with the ingredients that arrive on your kitchen counter is still evident.

While Ronan might try and win this veggie over with succulent chicken, one producer I’ve no problem gobbling up samples from is Kenneth Keavey of Green Earth Organics in Corrandulla.

It’s been five years since we visited Kenneth on his organic farm and not only has he become involved in Larder 360 but the veggie business has expanded to the east coast.

The Dublin opportunity arose about a year ago and now a wide range of vegetables and salads are grown and packed in Corrandulla and distributed throughout the capital.

“It’s been a rollercoaster year but now we’re selling more than we can grow so we source from other Galway producers such as Beechlawn Organics in Ballinasloe. The increased demand is helping other producers too,” says Kenneth.

Kenneth also say’s it about being treated fairly and taking back control of the product, which can get lost once larger outlets become involved.

Larder 360 is something that its owners feel can work in other parts of the country and they have hopes of setting up the coolbox system elsewhere over the coming year. But the focus would remain on delivering locally produced food to local communities by local people.  Under the Larder 360 umbrella all producers are promoted while also being free to continue with their own ideas.

A weekly or twice weekly order from Larder 360 won’t replace your usual stroll down the supermarket aisles but it certainly has a place on your shopping list and will offer items on the shelves that you won’t necessarily find on the shelves.

With the support of the Local Enterprise Office in Galway and also the SuperValu Food Academy, more and more small producers are being given more opportunities, better advice and momentum to grow, improve and continue what they love to do.

We as shoppers now need to show our support by placing at least one local product in our basket each week – whether it’s bread, meat, granola, fish or spuds, loving local has to start on your own doorstep. 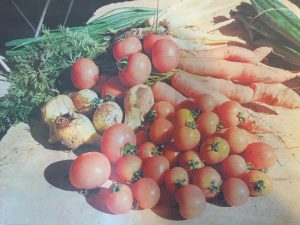