In ancient Irish folk tradition St. Brigid’s day on the 1st of February heralded the first day of spring and thus of the farmer’s year. It is a festival which honours our venerated second patron saint, as well as that of dairy work and cattle. Tradition states that the saint promised fine weather after the harsh winter. Farmers expressed their wish for fine weather for ploughing and digging by turning over a few sods in the tillage field. People who lived in coastal regions were of the belief that the spring tide nearest the festival Rabharta na Féile Bride the great spring tide was an occasion for gathering and cutting seaweed to fertilize the crops. The days lengthened and the day was used by many as an occasion to do stocktaking on the farm.

The housewife used the occasion of St. Brigid’s eve to ensure the house was respectable and tidy, a festive supper was also prepared consisting of apple cake, dumplings and colcannon irrespective of the financial situation of the household. Allied to this all farmers wives made what was known as a bairin-breac, neighbours were invited around and engaged in drinking and merrymaking. On St. Brigids eve it was generally believed that the saint traveled around the countryside, bestowing blessings on the people and livestock. Various elements were used to indicate that her visit to the house was welcomed. A common practice entailed the placing of a cake or pieces of bread and butter on the window-sill outside. Often this offering was left to be collected by a tramp or impoverished person. in other areas it was brought in the next morning and shared between the members of the household. Often a sheaf of corn was placed beside the cake as a refreshment for the saint’s favourite cow who accompanied her. Other households placed a bundle of straw or fresh rushes on the threshold on which the saint may kneel to bless the house or on which she could wipe her feet before entering. Further traditions include that dishes of water, salt, pieces of meat or butter being left outdoors as an offering for the saint, after she had passed by these would have acquired medicinal properties and were used to ward off illness.

The most common custom associated with St. Brigid’s eve was the making of the cros Bride or bogha Bride, which was hung in homes and often in the byre also. Tradition states that crosses were made for protection against fire and lightening as well as illness and epidemic disease could be held at bay. If the cross hung by the door evil spirits couldn’t enter. The residue left over after the cross was made wasn’t thrown out but placed on the floor by the hearth, often covered by a white cloth to form a bed for saint. In other areas the straw left from ‘Brigid’s bed’ and from the making of the crosses was believed to have healing powers. Strands were preserved and tied around an aching head or limb at night. The following day the wearer would place the strands on the fire, where if they burned quickly there would be a rapid cure. Some put the straw under the pillow to ward off disease and in Donegal fishermen used it for protection.

Many young people going from house to house with a symbol of the saint, ‘The Brideóg’ this was an effigy supposed to represent St. Brigid and made according to the local custom. It was usually a straw doll, dressed to portray a human figure. Often small children went to the neighbours houses and were given money. In some areas unmarried girls carried the effigy bestowing Brigid’s blessing on the house, often they handed out
crosses to the head of the houses they visited. It was accepted that the girl who carried the effigy was the most beautiful and modest of all. In other regions no effigy was used, the girl dressed in white and carried a locally made cross to represent the saint. Those who carried the ‘brideog’ were called ‘brideóga’, ‘biddies’ or ‘biddy-boys’.

This Brat Bride consisted of a silk ribbon placed on the window sill at night to honour St. Brigid. It was said to lengthen during the night and was used as a remedy against headache. The general belief was the saint on the eve of her feast went around the country would touch the brat and endow it with healing powers. Some said it healing power was strongest after 7 years. The brat could be a ribbon, a piece of linen or cloth like a scarf or handkerchief, thus touched by the saint would keep the wearer safe from harm especially on a hazardous or long journey. In Munster it was tied to the doorknob so the saint would touch it when entering the house. It was said to cure bareness, help women in childbirth, to ward of magic, the evil eye and fairies. If a farm animal became ill the sign of the cross was made with the brat over it which was then laid on the animals back to ensure the saints intervention on its behalf It helped animals to give birth and have a plentiful supply of milk.

The residue from the crosses was often added to the bedding of the horses and cows to ward off illness and danger. The crosses were often taken down from the byre to bless an ill cow or one who was producing little milk. Another custom was the making of spancels and cattle tyings on St. Brigids eve into which portions of Brigids bed or the threshold sheaf were woven. They were often used to lead animals to the fair and to calm fidgety animals as well as to ward off danger and evil magic.

Marriage divination was practiced. Imitation ladders and spinning wheels were woven from the rushes. The men would sleep with the spinning wheels under their pillow and the girl would sleep with the ladder under hers. They would see their future partner spinning the wheel or at the top of the ladder. Later the man and woman exchanged them as tokens and if they dreamed of each other they were sure to marry. If the lark or linnet should sing on Brigids day then it was a sign of a good spring. The dandelion was known as St. Brigids flower as it is one of the first wild flowers to bloom after her festival. It has medicinal value and forms the base of a potent wine. The saint entertained in a regal way and was known for home made ales which she gave to all visitors regardless. Others gathered hoare-frost from grass on the morning of St. Brigid’s day as an infallible cure for headache. Many people got water from a well dedicated to Brigid and sprinkled water on their fields, livestock and homes to invoke the blessing of the saint. 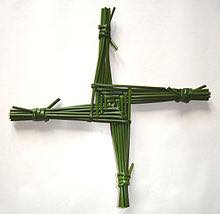