It seems appropriate to have a bit of a chat about potatoes what with it being St Patrick’s Day weekend and all.  Traditionally, Irish people put their spuds in the ground on or around St Patrick’s Day, believing it to be an auspicious day on which to do so.  We have somewhat of a pre-parade tradition in the Kelly household of sowing spuds with the children.  Since it’s always the first outside sowing I do each year, it’s always exciting after a long winter hibernation.

We mark out a row in the veg beds, I stick my hands down in to the cold soil around a foot-deep to make a hole, Youngest Girl pops in the seed spud and covers it with soil and then we shuffle on along the row.  She talks constantly while we work, peppering me with questions about anything and everything.  I say: ‘do you ever stop jibber-jabbering?’ and she laughs and says ‘No!’.  These are memories to cherish.

Fundamentally, potatoes are not difficult to grow – all you are doing is basically sticking one of last year’s spuds in the soil which sprouts in to a plant, which produces lots of other potatoes.  So a single potato is magically transformed in to anything from five to fifteen potatoes which you must admit is sort of miraculous.  The most important thing to remember is that potatoes form along the stem between the seed spud and the surface of the soil – the more space you have between the two, the more spuds you get.  So, that means either sowing the spud really deep in the soil, or ‘earthing up’ once the plant comes out of the ground – that means, drawing soil up around the stem to force it to grow longer.

Potatoes won’t really mind if your soil isn’t great, and in fact, they will do a good job of helping you to improve it. Sowing spuds is a universally accepted method of helping to turn an unpromisingly poor piece of ground in to a vegetable patch. When you grow your own potatoes you also get to try out lots of varieties that aren’t so readily available in the shops (where the Rooster and Kerr’s Pink hold sway) – you can literally grow whatever variety takes your fancy – for e.g. Orla, Home Guard, British Queen, Duke of York, Setanta, Cara, Sarpo Mira and more.

I think it’s weird that we’ve become obsessed with imported sweet potatoes as a so-called superfood when the humble spud is just as nutritious and what’s more it’s a seasonal, fresh, local food that also supports Irish jobs. It’s one of the most versatile ingredients we have at our disposal in the kitchen.  Very few dinners (in our house at least) do not contain some portion of potatoes, whether they be boiled, baked, roasted, fried, mashed, chipped, or if we’re feeling sassy au gratin, duchesse or dauphine.  And if you think supermarket spuds are convenient, well in my view it’s even more convenient to wander down to the veg patch and dig some spuds fresh from the soil – you don’t even have to get in the car. The act of harvesting spuds is pure GIY joy.  Rummaging in the soil underneath a potato plant and finding lots of lovely tubers is a moment that gives opening presents on Christmas morning a run for its money.

Effectively there are two types of potatoes – earlies and maincrop.  Earlies grow quickly, have no skin worth speaking of, and are usually out of the soil before blight arrives in summer.  Maincrop develop later, produce a higher yield, develop a thick skin and can therefore be stored – they are, unfortunately, more vulnerable to blight as they are in the ground during the summer months when blight conditions prevail.

Potatoes are grown from “seed potatoes” which are potatoes saved from the previous year’s crop.  It was traditional for Irish GIYers to save their own seed potatoes but this is generally out of favour now – better to buy certified seed potatoes each year, in case your own potatoes carry over a virus.  The soil in which you are planting potatoes requires a generous application of well-rotted farmyard manure, compost or seaweed before planting (ideally the previous winter).  Too much nitrogen however encourages leafy growth at the expense of the tubers. Sow first earlies in mid-March  in single rows, 15cm deep, 25cm apart and 45cm between rows.  Maincrop spuds are sown in mid to late April.  Increase spacing to 35cm. 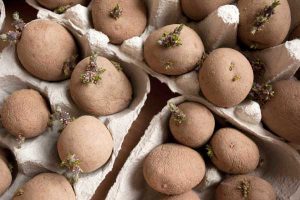