Timing is always important in the veg patch, but with the growing of tomatoes it is even more so.

Tomato seeds are sown in February and coaxed and nurtured along various phases of growth with a view to planting out in to a greenhouse or polytunnel in April or May.  A healthy cherry tomato plant can produce literally hundreds of tomatoes – it goes without saying that it takes a lot of energy to produce that much food, and so the plant has a lot of growing to do before it can undertake this super-human task.  So, growing tomatoes successfully in Ireland is about cheating our climate, and starting them indoors in February so the plants have enough time to grow big and strong before producing fruit in July.

In previous years, I started tomato seeds off in 10cm pots, sowing 10 seeds per pot.  A few weeks later, after they germinated, I took each tiny seedling and put it in to a module tray to grow on.  Then when they outgrow the module tray I put each seedling back in to its own 10cm pot, before finally planting out in the soil in the polytunnel in May.  Needless to say this 4-stage process was a little time consuming (not to mention expensive with all that extra compost) – but on the other hand it served me well to get the plants good and strong.

Last year I upped the stakes considerably by buying a big commercial tunnel and cramming it with nearly 100 tomato plants.  The good news is that it meant endless supplies of tomato sauces and soups for the freezer. The bad news is that it meant our workload increased dramatically.  Taking advice from Richard our Head Grower here at GROW HQ (formerly a commercial organic grower), this year I am trying to cut out two of those phases.  I sowed the seeds directly in the module trays and am hoping to get them straight from there in to the soil.

This is where the timing issue comes in.  Richard in his wisdom waited until almost the end of February to sow his tomatoes which means his will be fine in the module trays until mid April when they can be planted out in the tunnel.  In my eagerness, I sowed mine in early February which means they are now bursting out of the trays but it’s still too early to plant them out.  So this week I had to plant them up in to bigger module trays to hold them for another few weeks.  Another timing lesson learned for next year.

Unlike say carrots or parsnips, tomatoes don’t mind a little handling at the seedling stage – moving them on to bigger pots or module trays shouldn’t harm them. Did you know that the little fuzzy hairs on the stem of a tomato seedling can become a root if planted under the soil?  Burying the seedlings a little deeper than normal will help to develop a larger, deeper root system and therefore healthier, sturdier plants.

When transplanting tomatoes, water them well the day before.  This makes them easier to remove the next day.  If they are coming out of module trays, just pop the little plug plant out of the module.  If they are coming from a pot or tray, hold the leaf of the seedling carefully and use a plant label to ease it out of the soil, bringing as much root with it as possible.  Make a hole in the compost in the new pot or module tray and pop the little seedling in carefully.  Firm it in gently.  If your seedlings are a bit leggy you can remedy this by burying up to 2/3 of the plant including the lower sets of leaves.

Have you always wanted to grow your own food, but don’t know where to start? Do you get confused by all those weird horticulture terms and Latin names for plants? This course for beginners with GIY Founder Michael Kelly will get you started on your GIY journey. Learn how to make a simple yearly plan for your veg patch, the most common veg to grow, and how and when to sow a variety of seeds as well as lots of tips on keeping your plants and soil healthy, managing pests and disease, and simple techniques to get the most out of your veg patch. Take home a variety of veg growing guides, and lots of other information to get you growing! Sunday April 9th, 10am to 4pm.  Price €65 including a delicious lunch at GROW HQ.  Book at www.growhq.org or call 051 584422 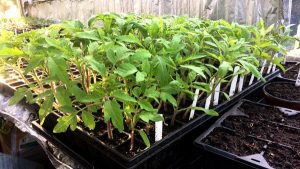