WE’VE all experienced the annoyance of a wheelie bin that has been knocked over and its contents scattered all over the ground.

But an Athenry-based inventor has developed a product to solve the problem, and with no other competitor on the market the award nominations have been flooding in.

Gaelan Goodfellow is a native of Ballybrit, Galway but lives in Athenry with his wife Jade.  His BinStrap invention is a regional finalist for the upcoming Bank of Ireland Startup Awards on May 18.

Before that, he and his product were up for recognition at the All Ireland Business Awards as well as JCI Galway’s Ten Outstanding Young Persons Awards.

BinStrap, which has a five-start rating on Amazon, is designed to keep the lids of wheelie bins fastened in testing weather conditions and even when they are knocked over.

The strap will also prevent bins from overflowing and will keep animals away from getting at the contents inside.

What makes the strap particularly handy is that it can also swivel 360 degrees to allow for collection and does not need a key. Gaelan is exporting the product to 13 countries worldwide, places as diverse as Canada, Slovenia and New Zealand.  A Japenese offshore drilling mining company has also bought 220 products.

In 2012, Gaelan was ready to branch out by himself. “The main plus points of BinStrap are that it is strong, robust and durable and that’s what probably helps to make it appealing to customers.  My wife and I mainly run the business and we also have a part-time worker who helps us out.  It’s being going well, thankfully,” said Gaelan.

Woodies DIY were one of Gaelan’s first customers, and he also supplied British Bins and Aberdeen County Council when starting off.  In fact, UK County Councils now provide their customers with BinStrap on a continuous basis.

A qualified electrician, when the boom period began to turn to bust, Gaelan started working with his father Joseph Goodfellow, who runs his own environmentally friendly company called Eco Grate.

Based in the Claregalway Corporate Park, Eco Grate make energy saving fireplaces and last year made a successful appearance on an episode of Dragon’s Den where an €80,000 investment was secured from Barry O’Sullivan and Eleanor McEvoy.

While Gaelan worked in his father’s business for a couple of years, he was also planning the concept of BinStrap.  The relationship was mutually beneficial, as his father helped when it came to the product. BinStrap is now shipped worldwide from a unit in Athenry where it is assembled.

Gaelan’s wife Jade Goodfellow is also an entrepreneur, and the busy couple have a family of three.  Jade’s Zipline business has won prizes two years running at the Micro Business Awards.

As part of his efforts to grow BinStrap worldwide, Gaelan has joined with organisations such as The Environmental Care Agency and Ocean Unite in a bid to generate more interest in sustainability the creation of a cleaner planet. 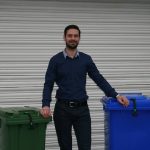