SECOND level students attending a County Galway school are left devastated when thousands of euros they collected for a trip was stolen by heartless thieves during a break-in last week.

First and second year students of Coláiste Baile Chláir in Claregalway had cobbled together funds for their school trips which are normally held prior to the summer break-up.

But following a break-in to the school, the money that they had collected for the trips was stolen from a safe on the premises which was broken open during the course of the raid.

It is understood that the trips will still take place – but it was a huge shock for both the students and their parents that the money was taken in such a manner.

Gardaí are investigating the break-in to the school which occurred in the early hours of Friday morning last.  It is believed that between €4,000 and €5,000 in cash was taken along with cheques and several computers during the course of the raid.

Students arrived for class to discover that the school had been broken into as Gardaí were on the scene investigating the incident. They were shocked to learn that their school trip funds had been taken as part of the break-in.

Those responsible disconnected the alarm and CCTV at the school before gaining entry to the secretary’s office by breaking a window.  The break-in occurred between 2am and 3.30am in the early hours of Friday morning last.

The second year students were planning to go on an overnight trip to Killary Adventure Centre in North Connemara which provides residential stays for schools and youth groups for more than 35 years.

The first years were set to go on a day trip to Petersburg Outdoor Education Centre near Clonbur – but a source in Coláiste Bhaile Chláir told the Connacht Tribune that the outings will go ahead regardless of what has happened.

Some of the money that was taken was also raised for local charities – adding to the trauma for the students.

Investigating Gardaí say that a substantial sum of cash and cheques made payable to the school were taken from an office during the raid.

It is believed that those responsible for the break-in have already made unsuccessful attempts to cash some of the cheques that were taken.

The cheques in question were given to the school by parents who were funding the trips for their children.

Gardaí are seeking information about who may have been responsible for the break-in Colaíste Bhaile Chláir.

They are asking anyone who may have seen anything suspicious in the corporate park or in the Lakeview area of Claregalway between the hours of 1.30am and 4am in the early hours of last Friday morning to contact Oranmore Garda Station 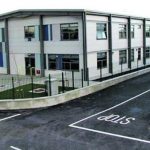