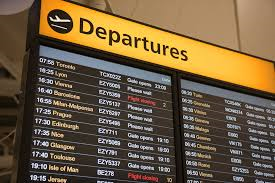 If last week in Qatar was a week for stoic calm for expats, this week was a week of quiet planning.

When Saudi Arabia together with the United Arab Emirates and few others decided to cut diplomatic ties with Qatar, my current home, last week, the initial reaction among us expats in Qatar was ‘oh well, a diplomatic problem, won’t affect us’. As events unfolded, turned out it affected us quite a bit. Not alone were borders blocked to Saudi, our major source of food, but the Airspace over Saudi, UAE and Egypt were all declared off limits for Qatar. Check Qatar out on a map, we’re pretty much tucked away here in the Persian Gulf, a tiny peninsula, surrounded by…. all these countries.

But let there be no panic, Turkey, Iran and even Morocco even chimed in with deliveries of food and by the end of last week, the shelves were stocked again with the finest Turkey milk imaginable. I will clarify, milk from Turkey, the country, not an actual turkey. With milk for our tea and no issue defrosting chicken in fifty-degree heat, we can focus on the other serious matters. Flights via UAE are still cancelled and the stability of work in the future in Qatar is naturally the biggest concern among expats. Qatar closed two helium plants this week causing another little ripple of concern about ongoing effects of this blockade.

Sure our ‘forever home’ is Ireland but our ‘now home’ is in Qatar. Thing is after all our complaining we actually like Qatar, and Qatar’s response to the sanctions against them has stirred a pride in us expats over the past week. The kids are settled and happy in school, we have a routine, a system, friends to uproot all of that would be a massive task, but not an impossible one if needs must. Did we not move to a new country four times in the last 7 years? Have the kids not always settled in the 4, 5, 6 different schools they’ve attended. Do we not always meet people and make friends? Are we not expert at taking the same container of Ikea furniture and fitting it into a compound in Abu Dhabi, an apartment in Jakarta or a villa in Doha, making each one our ‘now home’? So, when the panic whittles out and the fever calms, expats just resolve to, move on.

Repatriation is the natural first conclusion, however education being my personal worry, continuity of education for our older children to be exact. Now ingrained in the British system and right in the middle of GCSE’s and A Levels, repatriation to Ireland would be a living nightmare as the kids would have to revert to the Irish system and do the Leaving Cert. Somewhere to live, may be another issue. Watching reports of queues for houses in Ireland, I imagined it was a giveaway offer, but no, they were queueing up to fork out four hundred thousand for standard semi with posh(ish) windows.   Work, another issue, green shoots are being reported but does that transfer to a decent salary, I’m not convinced, given that since I registered with job hunting websites eight years ago, I have received very few ‘attractive packages’ and a whole pile of ‘Call Centre Administrator/ Fluent French Language essential’ messages. Perhaps more of a mark of the quality of my CV but then again nowhere did it state I spoke fluent French, certainement pas. Given all the above, if fleeing Qatar is an option, Ireland wouldn’t be the destination. Not yet.

Therefore, our minds wander to the rest of world and a common school gate conversation these days, often starts with, ‘when are you going home for summer? Will you be back? or where are thinking of moving to next?’. And not for the first time, we’re packing up the house for summer, and in the back of our minds wondering where will we see our possessions again, Qatar, Ireland, Jakarta, Kuala Lumpur, Kuwait, someone said Singapore was nice, Mongolia?

So here we are four sleeps to go before we say goodbye to Qatar for a few months, for a few years but hopefully not forever.