Seán Kyne has been given a junior ministerial portfolio that takes him across two government departments, while Ciaran Cannon has been rescued from his backbenches, having also been appointed a Minister of State, under new Taoiseach Leo Varadkar.

This week saw Galway West Fine Gael TD Kyne moved from his former role as minister of state for Gaeltacht affairs and natural resources, to be a Minister of State across two Government departments. He will serve in the Department of Rural and Community Development and The Department of Communications, Climate Action and Environment, with responsibility for Natural Resources, Community Affairs and Digital Development.

Galway East TD Cannon has been appointed Minister of State for the Diaspora, the Irish abroad, and Overseas Development. He had previously served as minister of state for training and skills, from 2011 to 2014. On facebook this week Dep Cannon said he was “delighted” with the appointment.

“It’s a great privilege to serve our country in this capacity,” he wrote.  “I’m very grateful to the people of East Galway for putting their faith in me and I hope that I do them justice in this role.  Thanks to everyone for your kind words of congratulations.”

The appointment of both men means that under Taoiseach Varaskar, Galway now has two junior ministers – one in each constituency, a reversal to the situation that existed during Enda Kenny’s first three years as Taoiseach.

That Dep Kyne would retain a ministerial portfolio was little surprise given his vocal support for Leo Varadkar in the FG leadership campaign.  However there was initial speculation that his being moved from the Department of the Gaeltacht was a kind of downgrading – given he had performed well in the role, and that, as a Connemara TD, his ability to deliver for the region would strengthen his base and continue to establish him firmly as the only Connemara based politician who can hold his own against Fianna Fáil Dep Eamjon Ó Cuív.

However, Dep Kyne’s new role can be seen as a promotion. His role at the Department of Communications, Climate Action and Environment has been expanded to include not only natural resources and inland fisheries, but also digital development. Natural resources and inland fisheries will continue to allow contact with Gaeltacht regions and Connemara, as will the fact his junior ministerial responsibilities also fall under the Department of Rural and Community Development.

Speaking this week, Minister Kyne said: “I look forward to continuing my work in natural resources as well as the new challenges in community affairs which involves many commitments in the Programme for Government on renewing and revitalising both rural and urban communities.  I will continue to work with Gaeltacht communities, with Irish language speakers, and with everyone who shares the commitment to protect, preserve and promote An Ghaeilge.”

The appointments of deputies Kyne and Canon was welcomed by the Galway Chamber of Commerce and Industry.

“Minister Kyne’s enhanced portfolio of Natural Resources, Community Affairs and Digital Development are key areas for Galway and the region,” said chamber president Maurice O’Gorman. “Digital development permeates all business and is key to the start-up tech sector. Minister Cannon’s appointment as Minister of State for the Diaspora, the Irish abroad, the Overseas Development is also an area in which business is interested. Our efforts to attract investment and to urge business to locate and relocate here is greatly helped by the efforts of our diaspora.”

(Ciaran is pictured below with is wife Niamh) 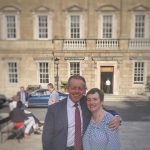