I can see the veg patch out the window as I write this, and I think it’s fair to say that there’s a real sense of abundant growth right now. May was incredibly dry which didn’t help the growth, so I guess the substantial rain over the last week or so has really driven things on. Though the weather continues to be somewhat unpredictable (still rather chilly and very windy), everything is growing like mad, including the weeds.

Incidentally, I am plagued with chickweed in the smaller polytunnel this year.  This vigourous weed is incredibly hardy and has a substantial root system that defies hand weeding.  Hoeing while the soil is dry is the best defense but since each plant can produce up to 15,000 seeds, staying ahead of it can be a challenge.

We’ve been eating new potatoes from the big tunnel for a few weeks now, and the crop outside in the veg patch is looking healthy at this stage.  I am hoping that it will be ready just as the small polytunnel crop is finished (in probably a fortnight or so).  The top of the first sowing of pea plants are just visible behind the spuds and are doing well also.  In the foreground I can see the garlic and onions.  The former has developed a rust, as it always does in our garden.  It doesn’t really affect the bulbs so it’s more of an aesthetic problem than anything else.  Beetroot, carrots, parsnips, celery, celeriac, courgettes and kale are all growing well but small still.  In the big tunnel the tomatoes are flying – we’re only a week or two away from the first ripe tomatoes.

There are quite a few crops that I’ve left in the soil from last year on the grounds that they either look very pretty or are useful in other ways.  Considering how much of a neat freak I am generally, I am surprising myself with this laissez-faire attitude. The purple sprouting broccoli plants are long past their best, but they’ve a mass of yellow flowers on them and every time I go near them I can see the bees moving stealthily from flower to flower.  It would be somewhat mean to deprive them of this valuable source of pollen.  The leeks from last winter, also past their best, have shot up and produced a seed head.  Also very pretty and therefore getting a temporary reprieve.

Last night we had our first meal of the year that came entirely from the garden. It was a simple enough affair (see recipe below) – a salad supper I suppose you could call it, with some hard boiled eggs, lots of greens and herbs, some peas and new potatoes, and a good vinaigrette.  But still, it’s an important milestone and hopefully the start of a self-sufficient and delicious 8 or 9 month spell.

The Basics – How to Hoe

Controlling weeds with a hoe is the best way to keep on top of them and far easier than hand-weeding.  Regular hoeing kills off visible weeds, but also kills the weed seedlings that haven’t even appeared above the ground.   Planting vegetables in lines means that you can run the hoe up between the rows to control weeds between the veg.  Since most vegetables don’t like competition from weeds, keeping your veg beds weed-free makes the veg patch more productive.

The best time to hoe is before weeds have appeared – this is easier said than done a lot of the time, but regular hoeing in the veg patch will make your life much easier.  Weed seedlings are developing all the time, and by upsetting them with the hoe, they are less likely to grow.

It’s best to hoe when the soil surface is dry and the weather is sunny.  The weeds stand much less chance of re-rooting if the soil is dry, and a hot sun will shrivel them once they are dislodged.

When using your hoe, stand upright to protect your back and run the hoe over and back just below the surface of the soil.  The idea is to cut the weeds beneath the soil at root level (rather than slicing the top of them off at soil level).

There are numerous types of hoe and having a couple of different types in the toolshed is usually the way to go.  The oscillating hoe swivels as you move it forward and back and is great for moving quickly over a large bed.  A dutch hoe has a smaller head for getting in around plants and doing the precision work.  A hand hoe is good for when you’re down on the hands and knees dealing with more established weeds. 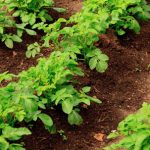