COLÁISTE Bhaile Chláir was recently honoured for its efforts in promoting a mental health awareness at a ceremony for the annual Cycle Against Suicide Ambassador School Awards.

Link teacher Shirley Hanley travelled to Dublin to the Royal Hospital in Kilmainham on Tuesday September 12, along with students Mark Slevin, Vanessa Dinan and Luke Adams. As part of the Ambassador School Programme of events, Coláiste Bhaile Chláir completed the ‘Five Gears’ part of the course over the space of a year.  For this, the school was given status as an Ambassador School by Cycle Against Suicide.

While at the Royal Hospital, the Coláiste Bhaile Chláir representatives got the chance to meet and receive their award from Helen McEntee, who is now the Minister for European Affairs but had previously been Minister for Mental Health and Older People up to the June cabinet reshuffle.

The Claregalway secondary school was one of 89 other schools around the country who partook in the programme.  The Ambassador School Programme provides a framework for schools to bring mental health activities into their school plan.

This also helps to further promote Cycle Against Suicide’s overall core message of “It’s OK not to feel OK; and it’s absolutely OK to ask for help”. 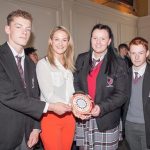