Need a Laugh? Well we’ve got four nights of the best laughs in town.

Compantas Lir Drama group present their well anticipated annual Autumn Theatre Festival, as they have done now, for over three decades. They will be putting on two hilarious one act comedies, that will run over four nights, from the 17th to the 20th of October at 8pm sharp in Carnmore Community Centre, Carnmore.

“Spreading the News” is a play by Lady Gregory which takes an hilarious look at how rumours and idle whispers can have all sorts of manic chaos leading to a false arrest for a murder that never happened… Yes if you live in a little village, you can only too well imagine how all this can happen,

“Shakespeare is a Dick” When the young red neck Wally curses the name of Shakespeare and opts to attend a Monster Truck Show instead of “As You Like It” he feels the wrath of the Bard. Waking up after a heavy night of boozing, he finds he can only speak in Shakspearian verse. His best friend Ramie searches for a cure from their high school English teacher Ingrid, while his girlfriend swoons over the new Wally….

In between each play, complimentary wine and biscuits treats will be served so as you enjoy the whole experience of the Autumn Theatre Festival. 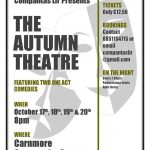