It’s a common question from home, ‘are women allowed drive in Qatar’, ‘oh yes’ I always respond, ‘that’s Saudi you’re thinking of’. Well no longer, as of this week, women are officially allowed to drive in Saudi. However, before they let off the handbrake and slip it into first, the official nod isn’t taking effect under June next year. Word is, even then it will take a while to get the initiative, can lifting the ban on women being allowed to drive, be called an initiative? Surely, it’s more of a hesitate step into the twenty first century or maybe it’s an out and out PR stunt, a pawn, for Saudi to boost their attempts at trying to position themselves as a viable place for business and investment as part of their ambitious ‘Vision 2030’ plan.

Reports say, ‘the slow roll out is due to the length of time it’s going to teach the women how to drive’. Statements like this make us realise that it’s going to take a lot more than a woman being allowed to drive to the supermarket to drag Saudi into the twenty first century!

Not one normally to pee on anyone’s parade but today I’m taking the time to consider this move and what it really means for a woman in Saudi.   Of course, we can’t ask them, because they have been forbidden from speaking openly about the lifting of the ban and indeed many other issues.

Another thing they are not allowed to do is walk by themselves. Forced to live under the supervision of a male guardian and requiring his permission for like, anything worthwhile, women in Saudi must be accompanied in public by a male relative at all times. It’s begs the question, will there need to be a male relative in the car always?

All women or all nationalities in Saudi must cover from head to toe in the black abaya. Here in Qatar, whilst Qatari women wear the abaya, they are allowed don the Louboutin’s and the Bulgari shades over the well made up eyes to sass it up a bit, unfortunately their Saudi counterparts, aren’t allowed to wear clothes or make-up that shows of their beauty. So, we would assume that an attempt to look downright sexy is also haram.

And what about a car accident, two cars collide, one with a male driver, one with a female driver, draped in black, wearing dark sunglasses and full face covering, ‘did you not see the indicator’, ‘Well frankly, NO’, will be the reply and when the incident goes to court how will the woman fair out given that a woman’s testimony in Saudi is worth half a man’s. Chances of getting off light because of a woman judge is unlikely as women aren’t allowed become judges either!

And by the way, where will they be going? Women make up only 12% of the workforce in Saudi and are restricted to working in positions that serve women only. They aren’t allowed go out shopping alone and anyway, they’re not allowed try on clothes in a shop. The school run….. really?, women all over the world are sick and tired doing the school run, are they really putting their hands up to go back and forth to the school up to four times a day, five days a week, for about 14 years?

From what I can see, having a driver was just about only thing they had the only thing going for them! But of course, whatever the reason, whatever the practicalities, it’s a win. It’s a step in the right direction, about 20 years behind Qatar and light years from home and while these women have a long road to travel to get acceptable women’s rights, at least they can drive now! 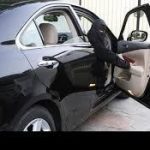