WHILE many look forward to retirement, not everyone adjusts to the slower pace of life – like Liam Madden, who got so bored with the lack of purpose that he has decided it just wasn’t for him.

After forty years running the family business that started three generations ago in 1833, Liam and Carol Madden announced their retirement.in 2015.  But just over two years later, Liam is re-opening the nurseries in Frenchfort, Oranmore.

The growing had never stopped as it supplied Liam’s landscape business which he kept on, but the gates are once again open for wholesale business.

This week, Liam told The Connacht Tribune that retirement for him was more like death by boredom.

“I don’t golf or walk the dog.  I don’t want to travel the world – I’ve seen enough of it through the business over the years and I’m not the type to put the feet up to do the daily crossword.

“I love challenges and keeping busy and I found I missed meeting people.  I always took Sundays off when I was working and I enjoyed them but not when every day became a Sunday,” he said.

And though the nursery closed its doors over two years ago, Liam continued his landscaping business and keep on his crew to maintain and service old contracts.

But that wasn’t enough for Liam – and in recent months he started thinking of re-opening his wholesale nursery business, though this time without Carol who is thoroughly enjoying her retirement.

Liam’s voice sounds alive as he describes what it’s like going to work again, having to open up the store so to speak.

“I kept on some staff to man the nursery where we continued to grow trees, shrubs and hedging.  I threw away the watch and had the lads working away on landscaping and growing.  I realised my heart was in the growing.”

He admits he has gained a new zest for the commercial horticultural side of the business and is looking forward to doing business with his many loyal customers, mostly wholesale.

Liam stresses that retirement is fine for those who crave it but having tried it himself, he found it wasn’t for him

“It was like being in a cage and I found when people talked about our business closing, it was like they were talking about adeath.

“I wasn’t ready for that yet. I want to keep busy and stay sharp.  I’m a people person and I’m looking forward to seeing customers back here in Frenchfort again.”

As well as being open daily, the nursery will open Saturdays from 8am to 3pm during October and November and again for the months of February and March.

As well as growing a variety of trees, shrubs, fruit trees and hedging, Maddens will resume stocking perennials and bedding plants.

He stressed that they were not in the business of selling garden furniture or other paraphernalia associated with gardening as they were a nursery.

He will continue his landscaping business and is really looking forward to fronting the nursery again, keeping the family industry alive. 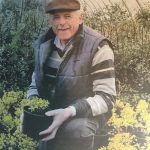