P McMahon was born in Dublin and moved Galway city in 1999. He is a restaurateur, chef and educator. He has three popular restaurants under the brand Eat Galway – Aniar Restaurant, Cava Bodega and Eat Gastropub. As Culinary Director, Jp manages all aspects of the food side of the business. He chefs, teaches, and promotes the restaurants through traditional and social media outlets. He travels nationally and internationally giving demonstrations and lectures. Drigín Gaffey, JP’s wife and business partner, manages all aspects of front of house and the financial and admin side of the business
After working behind the scenes for many years JP and Drigin opened Cava Restaurant, their first venture, in 2008. At the time Tom Doorly said they served ‘the best tapas in Ireland’. Cava very quickly became the hottest spot in town offering a unique and fun atmosphere. They then went on to take over the food aspect of Massimo bar on William Street through their gastropub offering of high quality, accessible food for all. In 2011 JP and Drigin opened another restaurant next door to Cava, this time a very different restaurant targeting a different style of diner – Aniar. Aniar translates as ‘from the west’. Aniar and it’s unique philosophy gained a Michelin Star in 2012. One of the few, if not first, Michelin Stars in Galway.
In Spring 2013 after a dispute over lease agreement, Cava Restaurant closed. It reopened as Cava Bodega on Middle Street in September 2013. Aniar went on to retain it’s Michelin Star in 2013.
JP runs frequent award-winning cooking classes in Aniar. He also teaches school students via the Food Education program. He is passionate about preserving food from curing to pickling and fermentation. He is a keen nose to tail dining enthusiast. His restaurants share is philosophy of working with farmers and primary producers in order to achieve a more direct connection with food and land.
Jp is chairperson for the Galway Food Festival 2014, he held this position for the inaugural event in 2012 and again in 2013. He was runner up for JMC Entrepreneur of the Year 2012. He sits on the Food Council of EuroToques. He is a Food Ambassador for Failte Ireland and was invited by Failte Ireland to speak at Toronto Hospitality Symposium Terroir in 2013. Jp is first Irish person to the represent Ireland with the esteemed Cook It Raw foundation.
Awards won by JP and Drigin’s restaurants include 2012 & 2013 Michelin stars, Best Restaurant in Ireland Food and Wine magazine (2012), Best Ethnic Restaurant, Georgina Campbell (2012); Best Emerging Irish Cuisine, RAI (2013); ‘Best Restaurant in Connacht, RAI (2012); Best Gastropub in Connaught, RAI (2013); Best Cookery School, Good Food Ireland (2013) plus many others.
Jp holds a degree in Art History and English and often gives talks on Food in Art History. He lives in Galway with his wife and business partner Drigin and his two children, 5 year old Heather and 2 year old Martha.
JANUARY 21, 2014 BY OLIVIA COLLINS 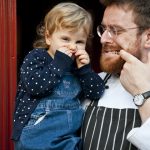