ALMOST 19,000 workers – or one in four of the county’s labour force – make the stressful commute from towns right across Galway to work in the city every day.

That’s revealed in an analysis of Census figures undertaken by the Western Development Commission this week, which also shows an ever-growing industrial imbalance between city and county.

Because while Galway city shows a net gain of nearly 16,000 workers, a large proportion of them are likely to come from the county – and at the same time. the county itself shows a net loss of just over 16,000 from the 2011 Census.

But it’s the numbers making that daily commute from so-called feeder towns that underline the need for a vastly improved city roads network.

The 2016 Census reveals that – when the survey was conducted – there were 1,190 workers travelling into the city from Oranmore, 675 from Tuam, 658 from Athenry and just under 500 from both Loughrea and Bearna, joined by 54 from Furbo on their way.

Just under 350 a day make the journey from Moycullen, joined by 175 from Oughterard and 61 from Rosscahill; 145 travel into the city from Headford, and 123 from Lackaghbeg, 42 from Turloughmore and 116 from Corofin.

At the same time, there were 43,184 people whose place of work was located in County Galway.

Mayo (1,196) and Clare (496) were the next most popular locations for Galway city to draw workers from.

But the WDC also looks at the picture across Connacht, and finds that more people living in the West now leave the region altogether for work; for example over 4,200 travel from the west to work in Dublin, up by 16,9% since 2011.

And over 4,500 workers living in the Western Region work abroad.

The exodus is a factor that drew specific attention from WDC Policy Analyst Deirdre Frost.

“The trends suggest that while there is an increase in the number of Western Region residents in work, it is also clear that a greater number are commuting to work to places beyond the Western Region,” she said.

“Enterprise and employment policy should aim to provide more employment opportunities closer to where people live,” she added. 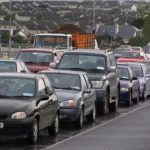