The Department of Education has earmarked a new Educate Together national school and a substantial extension to Coláiste Bhaile Chláir secondary school for the same site.

However, the plans sparked considerable opposition from some local residents and community groups.  They are concerned that the development will endanger public safety due to additional traffic and feel an alternative location for the new school should have been sought.

Claregalway ETNS opened in 2005 with 29 pupils and now has close to 160 pupils enrolled.  The new school is earmarked for a site adjoining Coláiste Bhaile Chláir and will be a 15 classroom two-storey building with a two classroom special needs unit and GP hall.

Permission was also granted for the third phase of Coláiste Bhaile Chláir, run by Galway Roscommon Education and Training Board (former VEC).

The latest phase will involve the construction of a two-storey extension to include a two classroom special needs unit and a sports hall.

However, many residents, who stressed they are supportive of both schools, aired their opposition to the location of the new primary school in submissions on the plants with Galway County Council.

Planning permission was granted subject to 14 conditions but this decision has gone to Bord Pleanala.  Appeals have been lodged by Sean Harte and the Lakeview Residents Association, Gerard Rohan, Claregalway Leisure Centre and Hubert Newell.

A decision on the appeals won’t be made until some time next February. 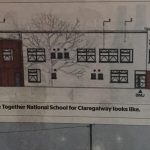