COMPÁNTAS Lir are now in the process of completing their casting for ‘The Glass Menagerie’ by Tennessee Williams which they will present in the annual drama circuit in the spring.

The Claregalway Carnmore Drama Group will  have rehearsals on three or four evenings each week in January and February which clearly demonstrates the effort that the cast and production team put in.  Compántas Lir will have their first presentation of ‘The Glass Menagerie’ by Tennessee Williams in An Taibhdhearc in Galway city on Frebuary 22, 23 and 24 before they start on in the competitive role on the Amateur Drama Festival Circuit. 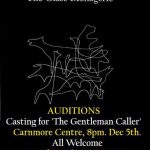