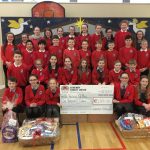 Pictured above are the pupils of Rang 6, Cregmore National School who presented a cheque of €1,000 to St. Vincent de Paul following their very successful Coffee Morning, Cake Sale and Raffle.