Naíona Bhaile Chláir na Gaillimhe (established 1991) which is located in Turloughmore Social Centre is one of the most successful Naíonra groups around.

The Naionra consists of two staff: Mairéad Uí Churnáin and Cáit de Búrca. Mairéad Uí Churnáin is from Athenry and took over the position of príomhstiúrthóir in September 2017 following the retirement of Maighréad UÍ Mhuineacháin. Her colleague Cáit de Búrcha lives locally in Cinn Uisce, Claregalway and has been working in the Naíonra for twenty five years.

Recently Cáit met one of her past pupils (Niamh Badger) from the Naíonra in the early years and was delighted to see that Niamh had graduated from Mary Immaculate College in Limerick in June 2017 and has also started teaching recently.

Cáit loves to hear about past pupils and the paths they have taken.  Some of the children that now go through the school are following in the footsteps of their parents who also went there.  The Naíonra operates under the guidance of Comhar Naíonraí na Gaeltacha who provide training support and administrative services.  The National Curriculum (Aistear) and the Quality Framework for Early Childhood Education (Síolta) are also in place here.

The Naíonra provides the children with a great foundation in the Irish language regardless as to whether they attend an English or Irish medium primary school.  Play and fun through the medium of Irish is central to what Cáit and Mairéad facilitate.  Cáit is always amazed at how young children can pick up the language in such a short space of time and how natural it comes to them.  The Naíonra encourages the children to have hands on approach in activities which is important for the holistic development of the child.

We do baking nearly every week”, Cáit says, “and we hope to have our own little garden patch soon.”  Turloughmore Social Centre has sanctioned the use of a small area for this purpose.  “We like to bring the children outside for nearly an hour every day.” Maireád says. “If the weather is bad they put on their wellies and walk in muddy puddles or we go to the sports hall where they can run around and do exercises.” The children are supervised during all activities.  The Naíonra use the playground at the Turloughmore Social Centre.

Recent changes announced by the Department see the entry age for a child is now two years and eight months and every child is entitled to two years’ free pre-school education.

There are still a limited number of free ECCE spaces in Naíonra Bhaile Chláir would be happy to meet with parents to discuss their child’s pre-school education.  For more information contact 087-3663973. 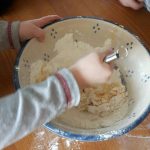 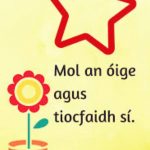