WHEN Tennessee Williams wrote his first masterpiece in 1944 his production notes asked directors to take the play on a journey and discover what the script offered to the production.

In Compántas Lir’s take on the classic Tom, played by Vincent Moran, takes center stage.  His story is told in flashback scenes where he recounts his mother Amanda’s efforts to find a husband for his sister Laura.  That effort is driven by Tom’s desire to leave the family to seek adventure and freedom.

The harsh circumstances that the family live in have resulted from the abandonment of them by the father many years earlier.  This abandonment is an ominous theme that Tom looks like echoing as the play unfolds.

The future of the family hinges on a dinner invitation to Jim, a work colleague of Tom’s who Amanda hopes will show an interest in her shy daughter.  The cast comprises Vincent Moran as Tom, Liz Hession making a welcome return as Amanda, Laura and Jim played by newcomers Deana MdGuire and Darragh Moran.

Compántas Lir have performed award winning plays for over 30 years and in 2016 won the All Ireland with their production of Proof by David Auburn.

The Glass Menagerie will run from Wednesday 21st to Friday 23rd February in an Taibhdhearc.  Tickets are €13 and €15.50  Booking is strongly advised and there are a limited number of tickets still available and on sale for this production at An Taibhdhearc – 091 562024 or www.antaibdhearc.com

Anyone from the area or indeed the county who wishes to meet the Claregalway group and live close to the areas where they are appearing, should endeavour to get to see the play while on tour. 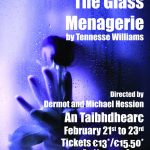