Last draw was in Summerfield Bar on Monday 26th March.

Well done to the Galway Senior ladies who defeated Dublin in the league on a scoreline 1-17 to 1-15. The Clubs U16 Girls had a good win 5-12 to 2-5 over Corofin in the Division 1 League played in Knockdoemore on Sunday. Our club was successful in being awarded the LGFA Gaelic4Girls (G4G) programme this year. The programme will run for 8 weeks starting Saturday April 14th and caters for girls aged 8 to 12 years who don’t already play with a club. The cost of the programme to interested girls will be €10 which includes the 8 weeks coaching and a Jersey.

Well done to the Coliste Ladies footballers reaching two All-Irelands in the one week Senior C and Junior B which is some achievement. Well done to the Clubs two U14 teams who both had league wins on bank holiday Monday. The Div. 1 team defeated Salthill 5-03 to 0-03 and the Div. 5 defeated Clonbur 4-08 to 3-05. Last week the U16’s opened their league with a win over Clonbur in Knockdoemore. There was disappointment for the Senior ladies when their game had to be postponed on Friday due to unplayable pitch. The Junior ladies opened their league with an easy win out in Killanin on Monday evening.

Well done to the Juvenile Club who held their open day last week. A great morning a celebration of our club achievements and the start of our 50th year. Well done to the joint collaboration from the Ladies and Boys Juvenile Clubs. The Ladies commenced their training on Saturday 7th of April while the Boys are back training on Sunday the 8th April.

The presentation of medals to successful juvenile boys’ teams from the club in 2017 took place last Saturday afternoon in the clubhouse.

A big thank you to Barry Goldrick, club senior and inter county player who presented the players with their medals.

Club Membership Update: Following many requests for on line registration the Club are happy to announce the on line registration system is now up and running and available through the club website. Further details will be mailed to existing members that we have a valid email address for shortly. https://www.claregalwaygaa.net/become-a-member/ 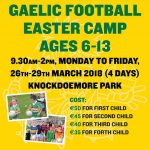