Saturday last proved a historic day for Claregalway Handball Club with
the official opening of their new 40×20 Handball Court by GAA Handball
President Joe Masterson. In the earlier part of the twentieth century
shortly after the foundation of the GAA Claregalway was one of many
areas around the country that built a handball alley beside the River
Clare in Claregalway. Handball was a very popular game in the
Claregalway area over many years but as in many areas, there were
times when activity in the game dipped. However the game revived and
many times and there was much activity when the handball club was
dealt a huge blow when they were approached by the Office of Public
Works who told them that the handball court would have to be
demolished to make way for flood relief scheme following the severe
flooding of 2009. While compensation was given, there wasn’t enough
funding made available to build a new modern covered facility. However
after a number of years through the hard work and dedication of
chairman Fergus Madden and then secretary the late Tom Lenihan, the
building project was put in place. Extra funding was needed and former
TD and now Senator John O’Mahony was approached through Cllr Frank
Kearney to seek funding through Minister Michael Ring who was in
charge of sports capital funding. A short time later on October 8th
2015 John O’Mahony announced that he had secured 95,000 euro for
Claregalway Handball Club. That immediately put Claregalway Handball
club into a position to build a new facility and last weekend that
dream came to reality.

Speaking at the opening Fergus Madden chairman of Claregalway Handball
Club paid tribute to all who helped bring the new handball court to
fruition. He paid special tribute to the late Tom Lenihan and welcomed
his wife Agnes who was asked to cut the special cake that was provided
for the official opening. Mr Madden expressed his special thanks to
GAA Handball President Joe Masterson for his attendance to officially
open the Handball Court and to Ms Frances Uí Curraion, Chairperson of
Galway Handball, to local TD Noel Grealish for his presence and to
Senator John O’Mahony to whom he expressed his sincere thanks for his
help in securing the capital sports funding on behalf of Claregalway
Handball Club. He also welcomed local councillors Malachy Noone, Jim
Cuddy and Frank Kearney, Fr Ian O’Neill as well as members, parents
and friends of Claregalway Handball. Mr Madden said that this was a
proud day for Claregalway and thanked all who worked on the project
and make this day possible. He paid special tribute to multiple World
Champion Niamh Heffernan who had achieved so much without a proper
court in which to train.

Ms Frances Ui Curraion, Chairperson of Galway Handball congratulated
Claregalway and said that this location which is so adjacent to the
North South and East West motorways will feature many top class
handball participants in the years ahead. She also paid tribute to the
success of Niamh Heffernan and to Joe O’Connell on winning his awards
for administration in Handball. Ms O Curraoin paid tribute to the
proud tradition that was in Claregalway Handball and hoped that the
club will go on to greater success over the years.

Noel Grealish TD congratulated all involved in Claregalway Handball
and said that this was another great day for the parish. He wished
them continued success in the future. Senator John O’Mahony said that
during his brief time as a TD representing the people of Claregalway
that he was delighted to be able to help secure the funding for
Claregalway Handball and paid tribute to Cllr Frank Kearney and to the
clubs former secretary Tom Lenihan who came to him seeking the funding
for the new handball court. He congratulated Niamh Heffernan and added
that for a young girl who has already achieved so much that with this
new facility that he had no doubt that the club will have further
successes. He added that handball is one of the few sports that can be
played by people of all ages and wished Claregalway Handball every
success in the future.

Mr Joe Masterson, GAA Handball President paid warm congratulations to
Claregalway Handball. He added that he was honoured to be in
Claregalway to open this facility and added that Galway was on a roll
in sport. As well as being All Ireland senior and minor hurling
champions, Martin Mulkerrins had won the senior handball title,
Corofin had the All Ireland club football and that camogie was also at
a high level with two club teams playing in All Ireland finals on the
same day as we open this facility. Mr Masterson added that it was
great to see so many young people now playing handball and
congratulated all the coaches who carried out so much work.

Fr Ian O’Neill, Parish Priest of Claregalway blessed the facility
before Joe Masterson, GAA Handball President officially cut the ribbon
to open the facility and Agnes Lenihan cut the special ceremonial cake
to honour the occasion. Afterwards all joined for refreshments in the
facility. This facility is another wonderful addition to the parish of
Claregalway and surrounding hinterland and well done to all involved. 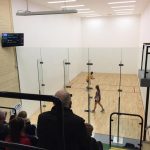