This is our 2nd year Competing in County and City Camogie Competitions. We have teams at U10, U12 and U14 levels. Last year, it is fair to say we struggled in most competitions. This year, the girls are doing us proud with some stirring performances. So much so that all three teams qualified for the final stages of the county competitions. While we did not have outright success at any level, we were not too far away. Great credit is due to the girls and their mentors for achieving so much. 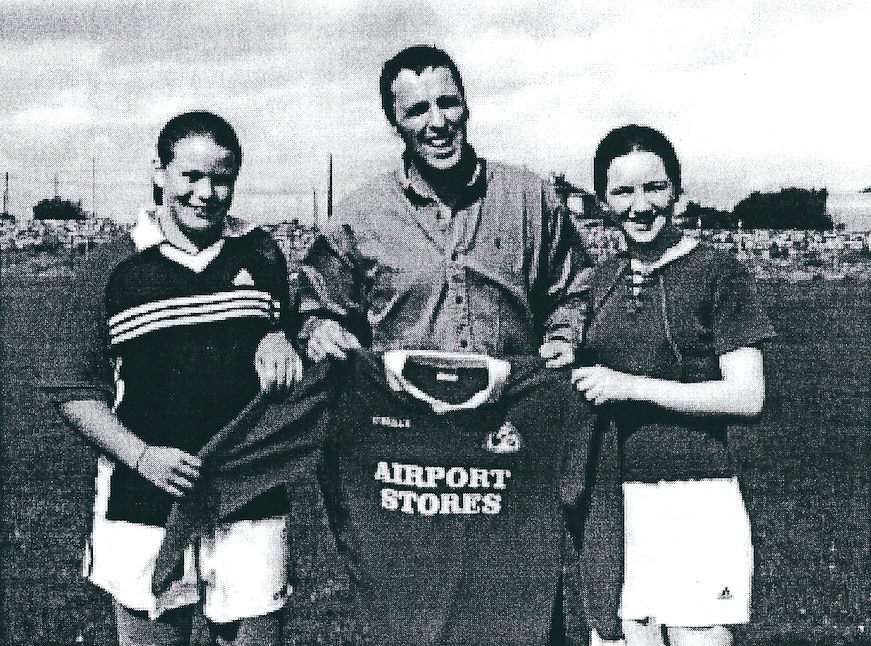 The Club are delighted with the set of jerseys presented by Liam Glynn of Airport Stores (pictured above with Hannah Coen, U12 and Sarah Fox, U10) and also for the sponsorship of J & C Kenny, Ger Crowe of Irish Life.

The involvement of the parents has been very good. They have willingly provided transport to matches and the support on the sideline lifts the team to great heights. Long may it continue.

The county competitions finished at the end of July and the City League Competitions get underway almost immediately. So in competition terms, we are only at the half-way stage.

The U14s went into action in late March and after a fairly shaky draw with Salthill, they went on to beat Ballinderreen and then had two rousing games with Oranmore-Maree and Ardrahan. In the Oranmore-Maree match we came from behind and won in a nail biting finish. The Ardrahan match was even more exciting and after going behind in extra time, we again came back to snatch victory and qualify for the county quarter-final. In the quarter-final, we played Castlegar and on a very warm day in Ardrahan, emerged victorious. On to the semi-final, where we came up against a good Meelick-Eyrecourt team who defeated us, but great credit to our team, they battled it out with this very experienced outfit. It was only in the last five minutes that they finally put us away.

The U12 Competition got underway in May with a win over Salthill, a draw with Ardrahan and further victories over Cois Fharraige and Abbeyknockmoy.

The game of the group for us was the match against Clarinbridge. We were fairly slow to settle and Clarinbride held a convincing 5 point lead at half-time. Things changed in the 2nd half and the girls gave a great display to completely turn the game around and win fairly easily in the end. This win took us out of the group and into the quarter-finals. For the quarter-final we were forced to line our without some key players who were gone away on holiday’s. This dentedour confidence a bit, but the girls put up a brave performance, before going under to Kinvara.

Our U10 campaign got off to a flying start with a good win over Clarinbridge. We followed this with wins over Craughwell and Cois Fharraige. We had a tough match with Renmore before coming out on top. Qualification hinged on our match with Ardrahan. Again, because of holidays, we were forced to line out without some key players. In probably the worst night’s rain of the entire Summer, we faced Ardrahan on their home pitch. In a rip-roaring contest, we pulled them back once, only to see them pull away again, but the girls fought back to snatch a brilliant victory. This qualified us for the quarter-finals where we were pitted against Killimordaly. In this contest we were defeated by a single goal. After conceding 2 early goals, the girls really swung into action and pulled one back. We attacked for most of the 2nd half and were unlucky not to level the match. Again this was a great performance against one of the strongest teams in the County.

The Club is still small in numbers and we would like to invite any girls from the parish who are interested in camogie to join us. Contact any of the players of mentors to get an idea of what it entails.