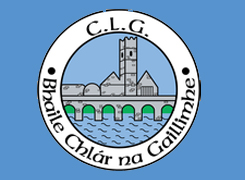 Club News: Excellent progress has been made to date on developments in Knockdoemore and in Lakeview. Much credit must go to the many volunteers who have given so freely of their time and expertise to get things to this stage. There will be a major fundraising drive launched over the next few months and the Club will be asking for all members particpation as well as reaching out to the wider community who will all benefit from this development on completion.  A calendar of events is currently in progress and will be distributed to all members when finalised. Membership has increased once again this year following our recent registration evening and the new facilities are fundamental in supporting this growth. A sincere thank you to everyone who has contributed to date.

On Saturday 27th March, the U14 Ladies once again represented their club at the highest level in the Féile Qualifiers. In the first round which was played in Claregalway, they defeated St Brendans, Glenamaddy and Tuam Cortoon before qualifying for the Semi Finals when they took on Kilkerrin-Clonberne. This was a nail-biting semi-final in Carnmore with nothing between the two teams. At half time, the score was even at just two points each. An early 2nd half goal from Claregalway put pressure on Kilkerrin/Clonberne however, they quickly responded with a goal to equalise once again. With another point from Claregalway, It is was a well fought battle to the final whistle with Claregalway managing to hold on to this advantage in the final minutes. The final score was Claregalway 1-3, Kilkerrin/Clonberne 1-2. Claregalway went on to defeat Salthill in the Final and for the second year running go forward to represent Galway in the National Finals in Derry in July. The Ladies Club wishes to say a sincere thank you to all the parents who contributed sandwiches, cakes etc and looked after both the home team and visiting teams on the day. Acknowledgement must also go to the Club members who lined the pitch and prepared the grounds so well for the qualifiers. Congratulations to Jimmy Gavin, Joan Gavin and all the mentors involved with the Panel.

Good luck to the Galway U-14 Ladies when they take on Sligo in the first round of the Connaught Championship in Clonberne on Saturday at 3pm. Claregalway will be represented on the Galway panel by Louise Brennan,Ciara Burke,Karen Dowd,Eimile Gavin,Siobhan Gavin and Megan Glynn.

Claregalway U16 boys had another good win last Thursday night in a challenge game played under lights at Clann na nGael grounds in Athlone. Claregalway started the game slowly & conceded 3 points without reply in the first 10 minutes. Claregalway settled after that and got on the scoreboard with a fine point from Colm Devery. Brian O Connell followed up with 2 more points to level the game after 18 minutes. Claregalway defended gallantly for the remainder of the half & further points from Mark Coyle, Rory Gunning, Harry Connelly & a goal from Andrew Dolan left the half time score Claregalway 1-6; Clann na nGael 0 – 3. The heavens opened at half time and the second half was played in very difficult conditions. Claregalway continued to play good football however despite the testing conditions and added further points from Paul Fahy, Andrew Dolan & Mark Coyle.

The county U16 league starts on Tuesday March 30 with an away game V Bearna. League games are on every Tuesday night at 7pm with training for all U16s every Friday evening at 6.00pm sharp.