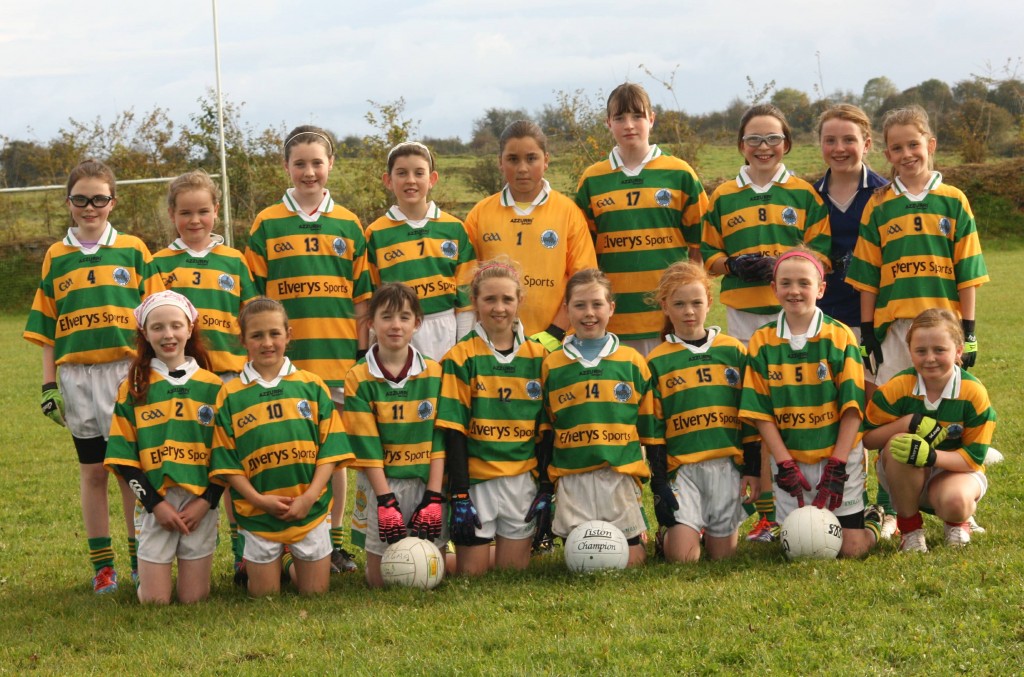 U12 Ladies Played St Gabriels in the A Championship County Final in Mountbellew on Saturday in what can only be described as a thrilling game of football. It took both sides a while to settle into the game with scores very hard to come by with both sides fighting hard while both sets of defenders worked exceptionally hard. The score at the break was Claregalway 0-1, St Gabriels 0-0. The second half was a different game of football with Claregalway starting the strongest scoring 2 fantastic goals in quick succession giving them a comfortable lead but St Gabriels never gave up scoring some great points and a goal to narrow the gap to just 1 point with minutes to go. The Claregalway girls however, dug deep and showed incredible charachter, scoring another 2 exceptional points from play to finish the game worthy winners on a scoreline of 2-5 to 1-5. County Board Chairman, Con Moynihan presented the cup to Claregalway Captain, Gemma Coll. Referee on the day was Gerry Moore. Congratulations to both U12 sides who both won their respective championships in A & D for 2012. Well done also to the management team of Christine Moran, Asumpta Gallagher, Dermot Coll, Eugene Kearney, Ben Trill, Liz Coyle, Mary Conlon, John Donovan and the parents for their fantastic support throughout the year.

Intermediate Ladies played Dunmore in the Division 1 League on Sunday in Knockdoemor. The Teams were evenly matched in the opening half with Claregalway holding a slender lead 2-4 to 1-5 at the break. Aided by the breeze in the second half the Claregalway girls ran out winners 6-9 to Dunmore 1-7. The Game was much closer than the score suggests and a feature of the game was all the six Claregalway goals were scored by Louise Brennan. This win keeps Claregalway in Contention for a Final appearance. Team Deirdre Cullina, Orla Murphy, Eimile Gavin, Megan Glynn, Ruth Horkan, Georgina Healy, Karen Dowd, Orla Dixon, Siobhan Gavin, Caoimhe Moran, Charlotte Cooney, Ciara Burke, Siofra Leonard, Deirdre Brennan, Louise Brennan, Michelle Dunleavey, Eimear Joyce, Ciara Campbell, Katherine Casserly.

U-13 training will take place under lights in Claregalway this wed 7-8pm and there will be an end of season Blitz held on Saturday week November 3rd.

Claregalway ladies play in an U15 ladies tournament to be held in Sarsfields GAA, Newbridge, Co Kildare on this Saturday 27th October. Teams invited to participate in the tournament are: Sarsfields (Kildare), Claregalway, Douglas (Cork), Kilmacud Crokes (Dublin). Training for U-15’s is in Claregalway this Wednesday evening at 7pm. Bus will depart the Clubhouse on Saturday morning at 8:30.