All Roads led to Mullingar on Saturday 30th November as the Green and Gold of Claregalway descended on St Lomans GAA for the Intermediate Ladies encounter against hot favourites Thomas Davis of Dublin in the All Ireland  Intermediate Club Championship Final.  The atmosphere was all the better because of the Large Claregalway support on the day.

Claregalway struck first as Michelle Dunleavy scored a good free Thomas Davis took over and dominated possession eventually taking the lead after good scores from both of their midfielders. The turning point came In the twelfth minute when Megan Glynn raided forward from the half back line setting up Charlotte Cooney who was brought down with the goal at her mercy. Thomas Davis were reduced to 14 players as Louise Curran was sent to the sinbin and Ciara Newell buried the resultant penalty. Further scores from Deirdre Brennan and frees from Ciara Burke and Michelle Dunleavy left Claregalway with a 2 point lead at half time 1–4 to 0–5.

Claregalway started the second half brightly scoring first thanks to a free from the ever reliable Ciara Burke. The Dublin club looked more and more to their senior star, Siobhan McGrath who started to exert more and more of an influence on proceedings setting up a move that lead to Ciara McGuigan putting over a free. Thomas Davis attacked in wave after wave but a combination of poor shooting and fantastic Claregalway defending kept them out. Deirdre Brennan lifted the siege for Claregalway with a well taken point but Siobhan McGrath responded in spectacular fashion with a long range point. The decisive moment of the match came with just 11 minutes to play as Deirdre Brennan ran through the heart of the Thomas Davis defence but was fouled by Karen Sweeney Lynch who received her team’s second yellow card as Ciara Burke popped over the resultant free and she followed that with 2 brilliant points from play to send Claregalway 5 points clear with time running out. To their credit Thomas Davis never gave up and scored two late points to leave a goal between the sides but time ran out for them and Claregalway were crowned Tesco Homegrown Intermediate All Ireland Club Champions on a Final score of 1–9 to 0–9. 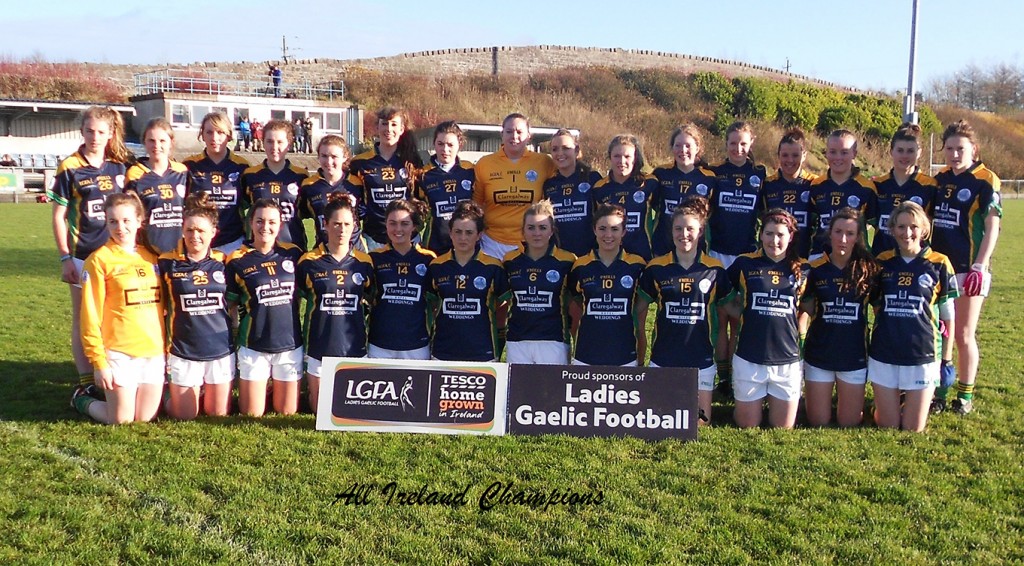 There were great scenes of joy and emotion afterwards as Fabienne Cooney was presented with the Cup and Megan Glynn picked up the Player of the Match award. This panel of 30 Girls had trained hard all year and got their deserved reward on Saturday when they became the first Adult team from the Club to bring home an All-Ireland Title. Thanks to the management of Martin Costelloe, Marty Dowd ,Rita Healy, Gerry Moran, Elaine Goldrick and the 30 girls for bringing so much joy to the Community with their fantastic displays of football all year. Thanks to ladies Club Officers Tim Hynes, Noel Gilmore and Michael Downes who ensured everything was put in place so that the Team fulfilled their potential. Also thanks to Laura, Rebecca, Shauna, Aoife and Ava who acted as water carriers for the Team all year. Finally thanks to Hubert Newell, Paul Nash Transport and the Claregalway Hotel who looked after everyone right from the start to finish of this wonderful journey.

On behalf of Claregalway Ladies Gaelic Football we would like to Thank all the Club members who travelled to Mullingar to support us in our All-Ireland Final victory last Saturday 30th  of November 2013. It was fantastic to hear the great support during the game and meet so many emotional and happy people after the final whistle.

It was greatly appreciated by the panel of girls and all involved.

The homecoming was brilliant and will remain with us forever, from the Motorway junction to the Claregalway Hotel our way was light up by the many blazing bonfires sparking out through the darkness of the night and seeing all the locals and supporters cheering us home, and of course the Garda escort with sirens blaring added greatly to the occasion.

This brilliant homecoming did not just happen, this was organised by the many great Claregalway GAA members who were contacting the Team bus as to our travel arrangements to ensure that the Welcome home was top class, and everyone on the bus were in awe that such a massive effort was made for the Team.

For everyone it is great to be part of a great club and Thanks very much from all in Claregalway Ladies Gaelic Football.

The Clubs Juvenille presentation takes place on Sunday 8th December at 4pm in the Centre.