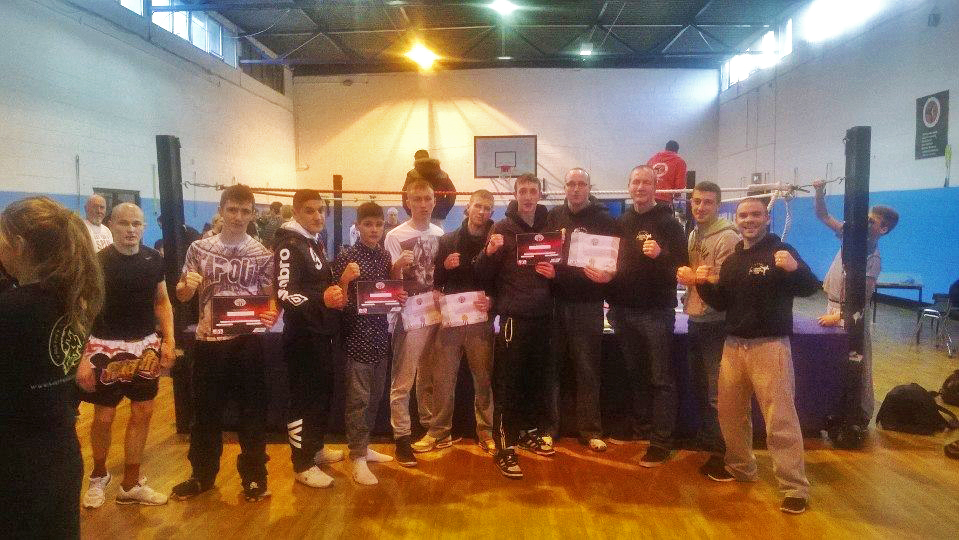 Galway kickboxers travelled to Waterford on Sunday to compete in the WKA Irish Championships under the guidance of Head Coach Sean Cumiskey of Corrib Kickboxing Club situated in Claregalway. Seven members of the kick boxing club entered the Irish championships and six members took home the gold.

First up was Martin Murphy from Athenry, who skilfully overcame his opponent to take a unanimous victory and become Irish Champion.

Next up into the ring was Claregalway local Liam O’Connell. Again it was O’Connell who dominated the fight which lead to him stopping his opponent in the first round with devastating body shots and became the second Irish champion for the Corrib kick boxing club.

Next up David Shortt stepped into the ring fresh after his five nation’s victory in Scotland in November. Shortt wasted no time and showed his experience—finishing his opponent 27 seconds into the first round—and his hand was raised as the third Champion for Galway.

Dylan Delaney from Claregalway was up next fighting in a low kick bout against an older and heavier opponent. However, it was Galway’s day as Delaney took a unanimous win to take the title.

Young Jordan Connolly from Claregalway stepped into the ring against a very tough and experienced fighter from Athlone. Connolly went into the first round strong and it was tit for tat as the round came to a close. However, the Athlone fighter came out stronger showing his experience and won the contest.

All these kick boxers have a very bright future ahead of them and have qualified to represent Ireland in the World Championships in Italy later this year.