As a new €400,000 sports and leisure centre, with playgrounds and playing pitches, takes shape in Knockdoemore to serve the people, especially the youngsters, of Claregalway and surrounding areas, the Chairperson of the Cairde Mór voluntary group behind the venture, John Morrin, says the facility is an investment in the future generations. 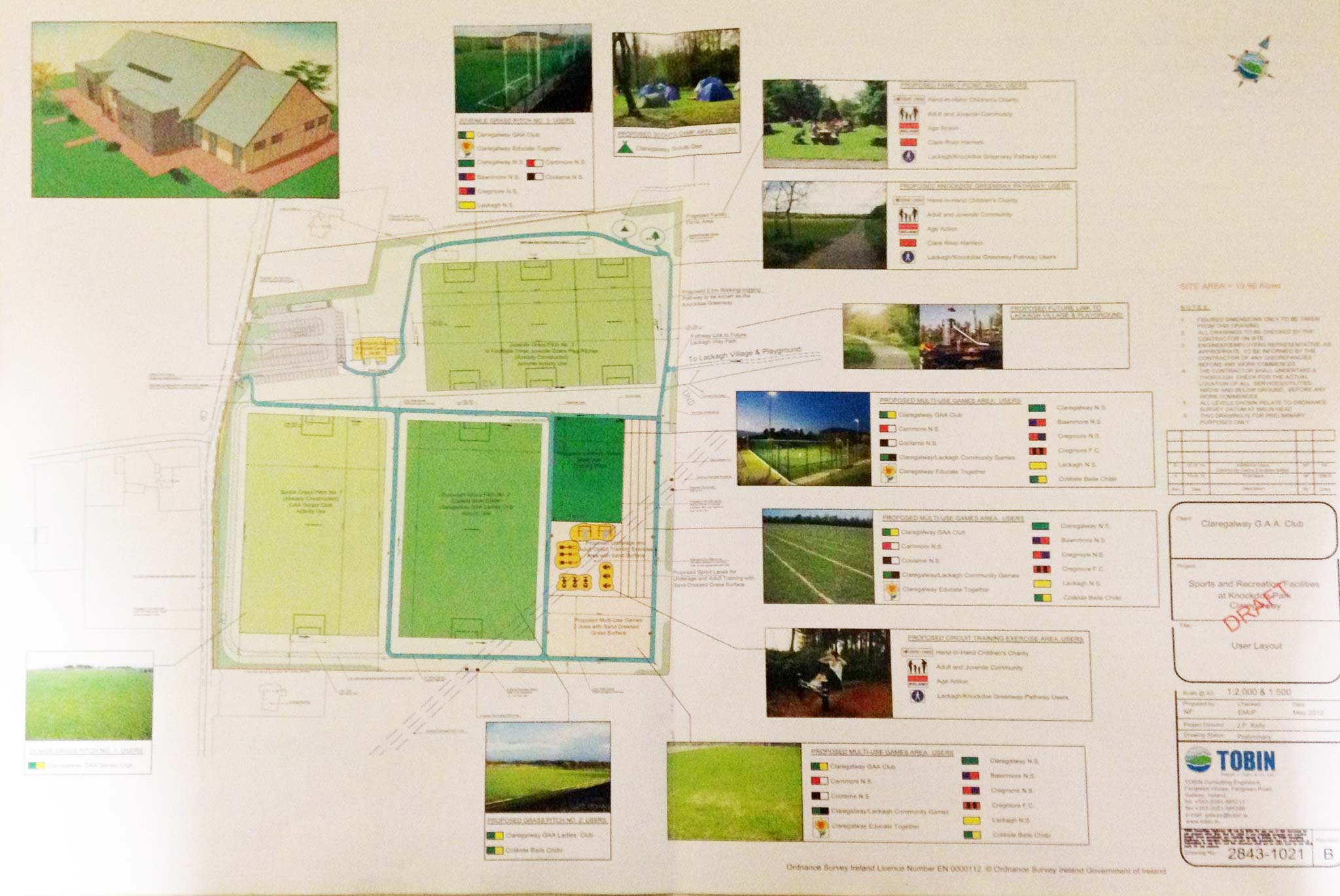 “It is something similar to sowing forestry for the benefit of your grandchildren,” says John as the committee, the GAA club and the whole community get behind a fundraising drive which is hoped to raise about €150,000 towards the ambitious project. “The development is in association with Knockdoemore Park and the GAA who bought twenty acres of land there a few years ago and already have two full size pitches on it,” says John.

“Our community sports and social centre building is now up to the roofing stage. It is a joint initiative with support from Galway Rural Development for the building while the community and the GAA are involved in fundraising,” he added.

John says that until funds from the current Buy a Block campaign come in they borrowed bridging capital from St Jarlath’s Credit Union who have a branch office locally in Turloughmore.

It is hoped to have it opened early in 2015. The GAA club also hope to have an all-weather Astro Turf pitch open there about the same time.

The next phase of the Cairde Mór project will be to develop a one kilometre walking track around the park which will be lit up at night and will be far safer for the many people out walking, jogging and running, than on the busy N17 and other roads around the area at present.

In a further phase the Cairde Mór group hope it might eventually extend to Lackagh and that sometime in the future it might also link up with the famous Battle of Knockdoe site of 1504.

“Cairde Mór was set up some years ago as a community development company for Lackagh, Turloughmore, Bawnmore and Cregmore areas, which all straddle the Claregalway and Turloughmore district,” says John.

The new community centre and playgrounds will cater for almost 2,000 primary school children in the local schools, Claregalway, Carnmore, Cregmore, Bawnmore, Coolarne, Educate Together and Lackagh.

The nearby new secondary school in Claregalway will cater for a projected 1,000 students in five years’ time,

“During the Celtic Tiger years many people came to live in our area, which resulted in a building boom, and has also contributed to the phenomenal growth of our football club in recent years,” says John, a native of the Neale in Co Mayo but a long time resident of Lackagh.

The Buy a Block campaign is the mainstay of their fundraising. More than 2,000 homes in the area are being visited to promote it. The initial response has been very positive. Individuals can buy a block for €50 while there is a family or group block available at €250 and the gold blocks for companies and other corporate groups cost €1,000. Meanwhile committee member Alan Moran says the youth are already making great use of the playing pitches and they have a TV celebrity training some of the teams.

“In our club our underage players are coming from seven schools and one of those involved in coaching is Hector Ó hEochagáin, who has some of his own children on the teams,” concluded Alan.

For photos from the early stages of construction, check out our album on Facebook.