As the further development of girls soccer in the club continues Cregmore-Claregalway FC are entering a team for the first time in the new Galway U18 League, set to start in the new year and are looking for new players in the area who may be interested in joining. This follows on from having entered a successful team in last year’s U16 League where the club went on to win the Galway Cup and runners up in the League.

This season the U16s are top of the Premier League having had wins over Athenry and Oranmore as have the U14A and U14B sides who topped the Premier League and Championship after a successful start to the season. The U16/17/18 train on a Thursday night in Lisheenkyle All-weather pitch from 7–8pm. All new players are welcome to add to the present squads. For more info contact any of the club coaches.

Cregmore-Claregalway FC U14 girls added the Connacht Shield trophy to the Galway League title they captured earlier this year when they overcame a strong challenge from Gurteen Celtic at Gurteen, Sligo last weekend. 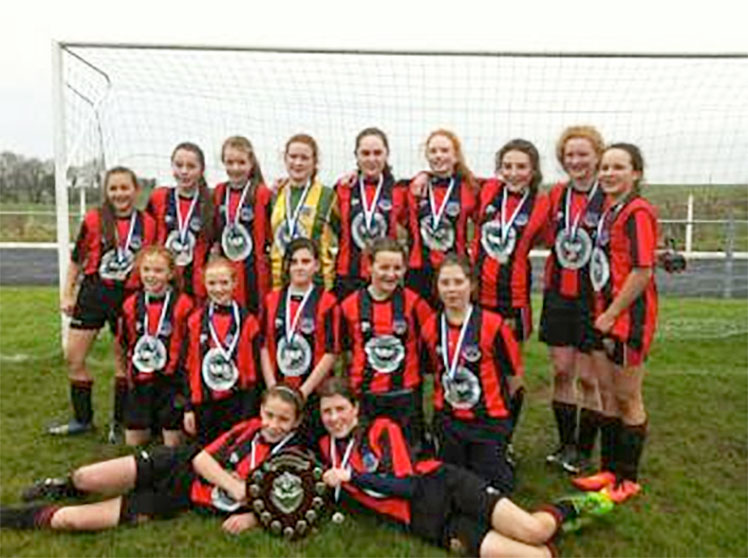 While the scoreline suggests an easy win for the visitors, it was far from the truth as it took the Galway girls a long time to break down the Gurteen defence and indeed the home side were unlucky not to take the lead on twenty minutes when a well struck shot came back off a post after CCFC goalkeeper Karen Connolly had made a brilliant fingertip save.

Rhiann Heery was in the right place at the right time to score Cregmore-Claregalway’s first goal on the half hour to give them a 1–0 half-time lead. Cregmore-Claregalway eventually got their team game going and Andrea Trill scored their second shortly after the interval but the home side rallied and were unlucky not to pull a goal or two back as they pushed forward in search of some reward for their gallant efforts.

However, the tireless Andrea Trill completed her hat trick with two well taken goals before Rhiann Heery bagged her second and her side’s fifth to secure a comfortable win in the end.

Joint captains Gemma Coll and Claire Conry accepted the shield on behalf of their team from Connacht representative Tina Beirne who also presented Cregmore-Claregalway midfielder Claire Conry with the Player of the Game award.