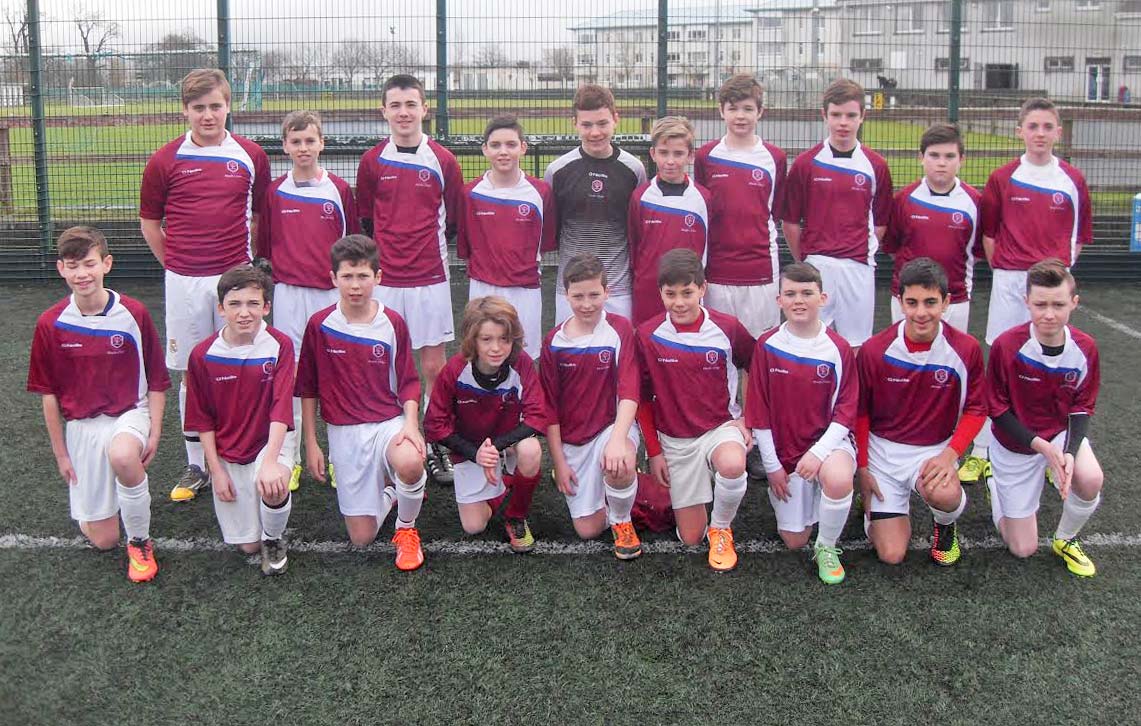 The U14 soccer team of Coláiste Bhaile Chláir returned to winning ways today as they overcame the challenge of Coláiste na Coiribe to advance to the quarter finals of their competition, at a superb Mervue venue. With a display of excellent team work and attitude, they ran out deserving winners and their inclusion in the knock out stages of the competition was secured.

There was a tentative opening to the game with both sides exhibiting some nervous touches early on, but when both teams settled into their rhythm, the standard of football played was very good. With five minutes gone, Josh Buckley played a clever ball through the last line of the defence which sent Adam Heneghan through one-on-one with the keeper.

The keeper got down well to save however, and two minutes later, he was on hand again to pull off a brilliant save from a Tommy Callinan left foot piledriver. The Claregalway side seemed to be taking command of the game with Heneghan and Callinan pulling the strings in midfield and Nathan Grainger and Conor Swan using the ball very well also. A couple of sliced clearances in defence in the opening period of the game seemed to suggest some nerves in there and eventually one of these clearances led to the opening goal of the game for the home side.

With sixteen minutes played, the ball was half cleared out of the defence to just outside the box and the lobbing return went all the way to the net in over the head of the Claregalway netminder Darragh Berthez. Coláiste na Coiribe had been threatening to score with a couple of telling invasions in to the opposition box in the minutes leading up to the goal and it was no more than they deserved. The Claregalway side were rattled and they sprung to life, creating a number of chances at the other end. One such chance fell to Callinan inside the box, but a fantastic last ditch tackle from the defender neutralised his attempted shot on goal.

Five minutes later, and the away side got themselves back in the game. Heneghan went on another surging run through the heart of the defence and, again, found himself in a one-on-one situation with the keeper. This time, he made no mistake however, as he deftly took the ball around the net minder only to find himself hauled to the ground for a certain penalty. The heavy fall on the artificial turf seemed to leave him unscathed as he duly stepped up and dispatched the resulting penalty to the left hand corner of the net.

Ciarán Keane, who had drifted up from his left back position, had a chance two minutes later, but his well struck volley was gathered comfortably by the Coláiste na Coiribe keeper. It looked like the sides might go in at half time sharing a goal each but Connor Swan had other things in mind. The industrious left sided midfielder was put through, thanks to a defence splitting pass from Callinan, and he coolly slotted the ball with his left under the advancing keeper to grab his side’s second. It was the perfect end to the first half for the away side who had done very well to come back from a goal down to edge their noses in front.

The second half definitely belonged to the away side as they began to dominate all over the park. With one minute gone, Josh Buckley showed grit and determination in making his way to the endline before crossing the ball into the box, where Heneghan was on hand to smash an unstoppable shot to the roof of the net.

Two minutes later Rory Moran also found his way into the box and engineered a great chance, which he finished to the net with aplomb. His brother Colm was absolutely immense in defence throughout the game, but he particularly flourished in this half. Like a general in the heart of the defence, he commanded the troops and led by example with his speed, agility and great tackling. Aided superbly by Kristan Flaherty alongside him, the pair laid down an impenetrable wall in front of Berthez’s goal in the second half.

Any ball that did go over the top was gathered easily by the steady keeper, whose booming kickouts launched a number of attacks also. Adam Kearney and Eoin Gavin were added to the mix, in place of Keane and Grainger respectively, and they both played well when introduced. With ten minutes left on the clock, the away side emptied their bench by bringing in Briain Winter, Michael Newell, Liam McDonagh, Allyn McKenna Patterson, Dillon Keogh and Shane Bermingham and they were all to make telling contributions when they came into the fray.

One contribution in particular from Newell was worth the entrance fee alone, when he flicked the ball ingeniously with the outside of his boot to set Winter free for a gallop up the left flank. With a few minutes left on the clock, a long delivery from Winter into the box wasn’t dealt with by the defence and Heneghan was on hand again to finish to the net and complete his excellent hat-trick.

The young footballers of Coláiste Bhaile Chláir march on now to the Quarter-Finals of the competition and if their excellent commitment, attitude, work rate and skill continue, they have a good chance of progressing even further. Well done lads!

Thanks also to Mr Dolan for helping out with the team today.