Claregalway Basketball Club’s season began back in September and has now finished since April. The year was very busy across all the age groups. Thanks to everyone—committee members, coaches, assistant coaches, team managers and parents—who assisted with the running of the club during the year. Your support is invaluable and greatly appreciated.

Thanks to all those who attended and supported the Christmas fun day, Basketball Marathon, Church gate collection, and the Annual All Star Awards Night 2015. Thanks to the Claregalway Hotel for hosting the awards night and sponsoring prizes for the raffle. To Hughes SuperValu, Raftery’s Centra, The Arches, Inspirations Gifts, Keady’s Dry Cleaners, Claregalway Chemist, Nicos, Sweeney’s Pharmacy, Home Gallery and J&J Photography. Here is a round up on all the teams this season.

Our U10 girls trained with Caroline O Gorman and Robert Bowe this year on Mondays. There was a great turnouts every week for this session with the coaches, let’s continue that into next season. Well done to all players who participated this year. The U10 girls are a non competitive age group where they learn the skills and rules of the game. They took part in a blitz in Killannin during the year and had a great time at it. Many thanks to Caroline and Rob for giving their time and parents during the year.

The boys have progressed nicely this year training on Mondays and Saturdays. Numbers were good all year with emphasis on learning the skills and developing players, not many games are played at this age group, the boys did play and beat titans early in year and they competed in a blitz in Moycullen beating Barna, Moycullen and losing to a very strong Corrib side. Thanks to Joanne Cullen and Rebecca Hansberry as training couldn’t go ahead without their help. Hope to see you all again next season.

Started the year slow, the U13 boys’ team is developing weekly and our lads played with great passion at the start of the season. We were up against teams that have been together longer and though we tried hard, we didn’t manage to notch up any wins. That changed though towards the end of the season and we got wins against Moycullen in the league playoffs as well as Corrib in the end of season Blitz.

The boys did really well in the blitz getting knocked out of the semi final playoff on points. This team is starting to gel and we hope to build more on our late successes through the summer and into next season. Congrats to our award winners, well deserved, and thanks to coaches James, Keith and Liam for working with the team throughout the season.

Trained on Monday night with Mike Murray and Rebecca Hansberry. The girls played many games throughout the year in both U13 and U14. They fought well in all of their games, the girls showed up in numbers all year for their sessions and made great improvements, they have great potential in years to come. Thanks to Michelle who distributed all the information to them during the year.

We had a great bunch of girls this year who worked very hard all season, unfortunately there was no silverware to show at the end but it wasn’t from lack of trying. With other pressures on many of the girls this year such as exams, studies and teenage discos the girls did very well and show that they can still play. At U16 level we were knocked out of the cup in the first round by a strong Corrib side but with a majority of these girls still U15 it looks good for the future.

This year we gained some new players and throughout the year along with the rest of the girls they had some craic and fought very hard travelling throughout the county along the way. Massive thanks has to be given to Mary Conlon for keeping these teams in the know all season as team manager and thanks to coach Dave Hansberry for all his efforts. Roll on the 2015 season. 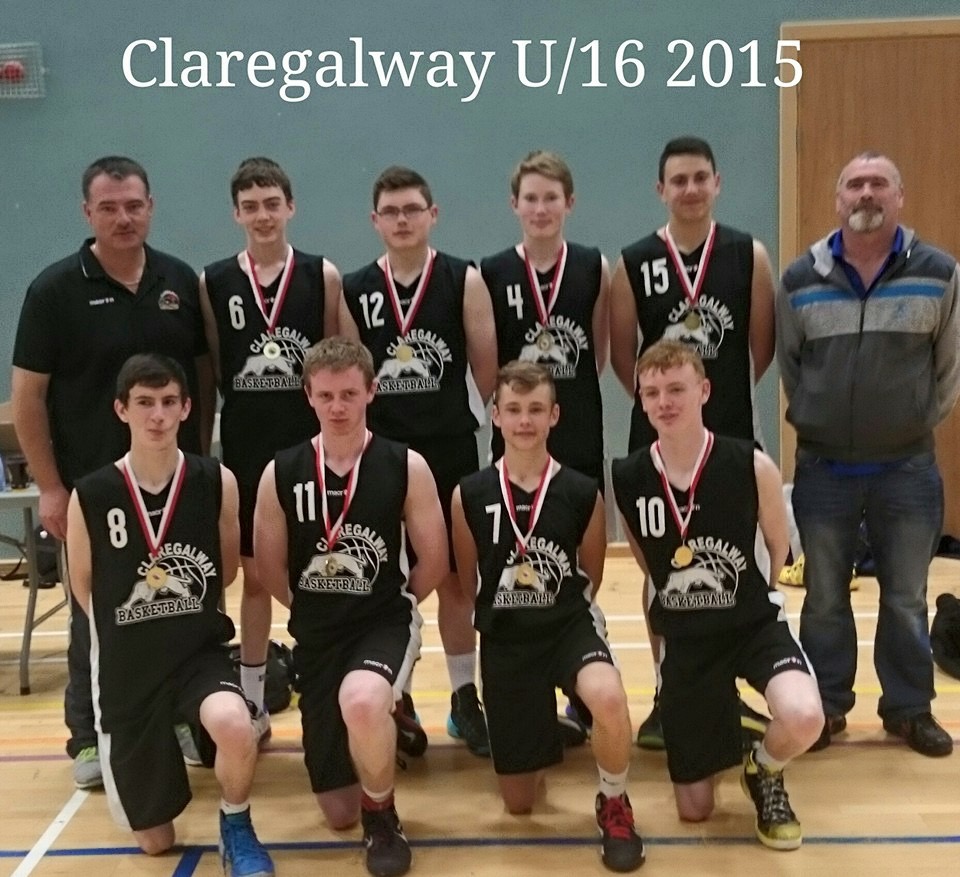 Train on Wednesday and Saturday and these are a very committed group of lads, most lads have come through the club from U10 upwards. They play in probably the most competitive league in the juvenile section where all teams are capable of beating each other—proof being the boys beat Moycullen twice this year in the league, Moycullen went on to play and win the A final while the Claregalway lads had to settle for the B final where they played Titans, which they went on to win with a bit to spare. Most of these lads represent their schools with the Bish, Maree, and Athenry benefitting from the Claregalway lads. A big thank you should go to Brendan Harte, without his presence training couldn’t go ahead as two adults are needed at sessions.

The senior section of the club had the best year for both men’s and women’s teams that the club has seen. Both teams going undefeated in the league and the cup for the first time ever in club history was a huge achievement. This season saw the Ladies team which were sponsored a set of gear from Acorn Life in August, retained the Galway Cup title for the sixth time in a row and the League title for the fourth in a row and the fifth in six years. 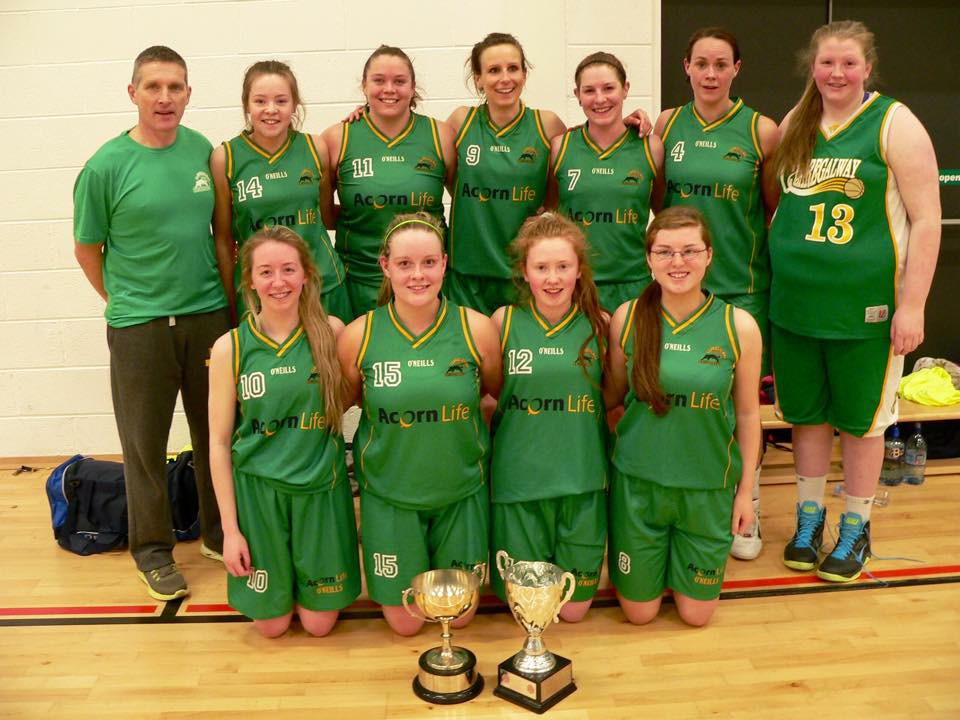 Coach Mike Murray’s ladies were backed by new and old faces with new recruits Kaisa Borek, Vanessa Creaven and Nikki Burke joining the squad along with some young guns Rachel Gaffney, Stephanie O’Connell, Caitriona Moran and Rebecca Hansberry. They complimented the returning players from last season Georgina, Kate, Mary Kate, Hannah, Shannon, Moya. The ladies competed in the senior league and Cup and won all games from October to April undefeated. The ladies have notch there 6th Cup Title in a row and their 4th league Title in a row and 5th in 6 years. Well done to all involved.

The senior men had a difficult preseason with a few of last year’s players leaving meant it looked like it was going to be a struggle even making a starting 5 for this year’s campaign. Coach Paul Flanagan had a tough task ahead blending these players together for the season, the return of Dave Hansberry, Dave Morris and Gregor Galucha added some serious quality. Tony Creane returned after his year off on maternity leave (he was also injured). Serious dealings in the International Transfer Market brought in two more Mayo boys (without the footballers curse) in Daire Conway and Tom Lavin. A badly needed injection of youth from 17 year old Peter Zabeki dropped the average age into the early 40s!

All the mentioned, added to club stalwarts Mike Murray, Marius Sarapajavus, Rob Bowe, John Caulfield and the maturing Ryan Murray meant all of a sudden Claregalway now had one of its strongest teams in the club history. Each player added something different at different times. When players were missing others stepped up to close out games. Even a guest appearance from Keith Duggan meant this was truly a great team performance from the whole squad. The Claregalway men’s team went through the season with a 100% win record. A wonderful achievement and one to be proud of. Also a foundation to be built upon. So the call goes out! 2015–16 here we come!

The club would like to acknowledge our juvenile members that competed in many secondary schools games and finals during the year with schools such as Coláiste Bhaile Chláir, Pres Athenry, Oranmore and the Bish to name a few. Well done to all who reached finals and keep up the good work. Some of our senior members competed in the National league (Kate Lyons, Hannah Coen, Lauren Murray and also the colleges Inter varsity event held in Belfast in April with NUIG. Lauren Murray, Ryan Murray, Hannah Coen and Kenneth Hansberry all played their part in the victories.

The men’s team won the A Varsity Title and the Ladies won the B Title convincingly captained by Lauren Murray. This leads us to the NUIG women’s coach Mike Murray who is also a club player and coach. Mike has taken up a new role as Galway Basketball Development Officer with Basketball Ireland and we would like to congratulate him on all his success this season both on and off the court, best wishes for your new role Mike.

For photos from the Awards ceremony, check out Claregalway Basketball Club’s album on Facebook.