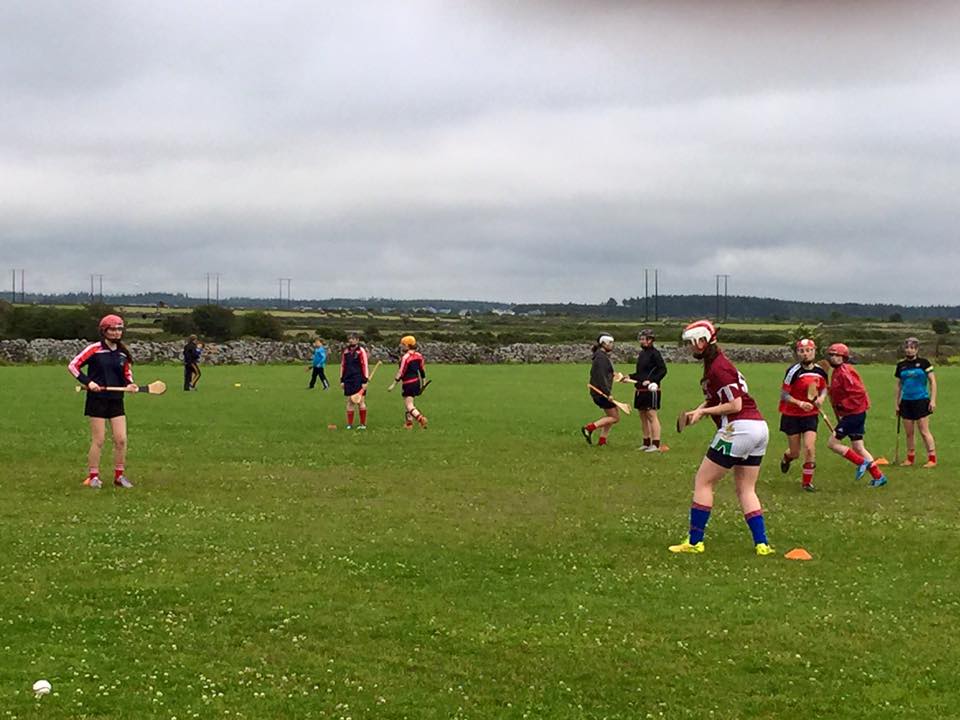 Intermediate Girls off to flyer

It’s been a busy week for Carnmore Camogie on all fronts with the Intermediate girls getting their championship campaign off to a flyer with a six point win over a strong Cappataggle outfit. Carnmore, who are looking to bounce back following a disappointing 2014 season and return to the form which saw them advance all the way to Intermediate County Final in 2013.

Under the management of Michael Killilea and Joe Reilly the girls went into this game in good shape following a league campaign that included some very good performances. Carnmore started brightly and found their range early. Despite being undone by Cappataggle goals on two occasions the girls never flinched and were always able to respond with scores of their own.

What was most impressive was the sharpness of the Carnmore attack and efficiency displayed when chances arose. Capptaggle’s two goals were keeping them in touch but when Sarah Fox found the net for Carnmore’s only three pointer the game was well beyond doubt as one could sense this composed and settled Carnmore side were not going to be overturned at this stage. Final score Carnmore 1–13 Cappataggle 2–4.

In a four team group which also includes Meelick/Eyrecourt and Ahascragh/Caltra another win should see Carnmore advance to the quarter finals.

U12 Girls add to trophy hall

Incredible would be an ideal word to describe what unfolded in the final moments of the U12 A County Final on June 28th. With the clock ticking into added time and Carnmore five points in arears to Davitt’s it all looked over.

Like in hurling, camogie can change in a flash and two pucks of the ball was all Carnmore needed to steal this County title at the death. One must sympathise with Davitt’s however who played very well throughout and were worth their five point lead. But credit to a young Carnmore side who never gave up, even went things weren’t happening for them. Just when the on looking support were getting the ready to console their young girls a goal suddenly left two points between the sides. Excitement and nervousness build around the ground, was there enough time to have another go was the question on everyone’s lips.

The answer was that yes, as the Davitt’s goalie pucked out the ball and play continued. Carnmore won possession and advanced down the field desperately searching for another goal, and like in something from a fairy tale Carnmore found the net again and most and gain the most precious of one point leads. That was to be the last action of the game as the Carnmore celebrations were filled with joy and also disbelieve over what had just unfolded.

This has been a year to remember for Carnmore Juvenile Camogie with both U14 and U12 girls now County champions.

U14 Girls through League Final

Carnmore beat Ardrahan in a game of two halves in Carnmore in the league semi final to qualify for their second final appearance of the year. Carnmore were in complete control of this contest in the opening twenty minutes leading 3–6 to 0–1.

Ardrahan came right back at Carnmore in the second half with a hat trick of goals and completely controlled the opening ten minutes. Carnmore now in danger of being caught needed a response and got exactly that with two further goals. This damped Ardrahan’s revival and ultimately was enough to send Carnmore to the league final.

Carnmore have won a thousand euro in the Topaz cash for clubs. The club would like to extend a huge thanks to al who supported this and took the time to buy fuel from Topaz garages and get their cards stamped. We hope we can count on your continued support for future fundraising events.

Carnmore GAA Club are currently in the process of constructing a stand on pitch one. We recently had a one day clothes and scrap collection which was a success.

Thank you to all who supported this event. Club funds are vital for our facility and player development. We would like to thank everyone has volunteered and contributed this year.