Sinéad is part of local club Cregmore Claregalway FC and is the first girl at both Coláiste Bhaile Chláir and the club to be capped at International grade.

The journey started way back in September 2015 with trials for Connaught U15 schools team. In October 2015, Sinéad was a regular part of the Connaught U15 girls team which competed in Interprovincial Tournament in Dublin and from this tournament was selected to participate in trials for Republic of Ireland FAI Schools U15 Girls Soccer Team. From November through to February, with only a break for Christmas time, trials were held on a fortnightly basis and in mid February 2016 Sinéad received confirmation that she was successful and part of the Republic of Ireland FAI Schools U15 Girls Soccer squad.

On 20th February, an International friendly vs Northern Ireland U15 girl’s team was played in Oriel Park in Dundalk. Sinéad was selected on the starting team and played the complete game which finished 1 nil to Republic of Ireland. Having achieved her first International game, Sinéad was also chosen as Player of the Match and presented with a trophy after game.

“Claregalway pupil Sinéad Donovan picked up the Player of the Match accolade following the game as she was outstanding for the Republic of Ireland. The teenager will be a player to watch out for at the Bob Docherty Tournament in early April.”—FAI Schools website match report U15 Int’l friendly vs Northern Ireland 20th Feb 2016. 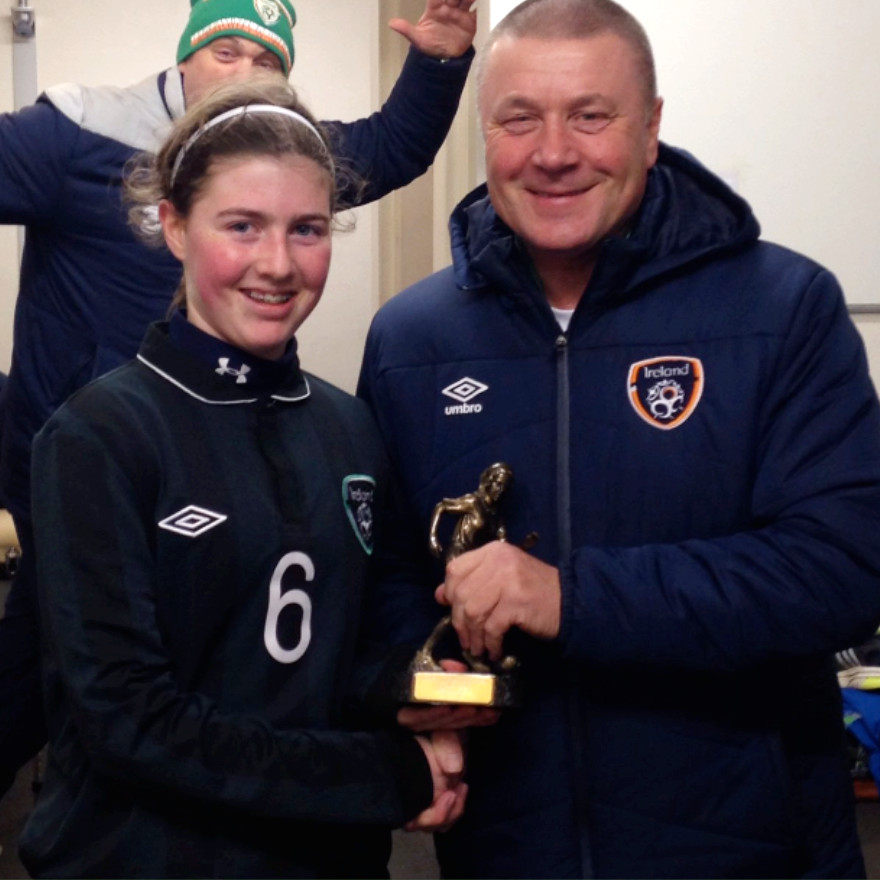 The following game was a trip to Manchester on 6th March to play England U15 Girls in another warm-up friendly. Playing on astro pitch in Cheshire, switched due to snow, a result of a 1 nil defeat to England was offset by a super team performance. Sinéad was again selected as part of starting team and played for the full game putting in a great performance.

Next up is final training session and then over to Wales for the Bob Docherty Tournament which is the International Tournament for U15 Girls National Schools Teams. The tournament will be made up of two groups of three teams with Republic of Ireland in group to play both Wales and Northern Ireland and depending on standings in group will play a third game in four days for final standings of both groups.

Republic of Ireland have finished runners up in last two years so hopefully they will go a step further in April.

We wish Sinéad, and the team, the best of luck and hope they will do themselves proud representing their schools and country at this prestigious tournament.