Claregalway Parish Church hold a monthly Youth Mass and have invited Claregalway GAA Club to take part in the next Mass which takes place on Saturday 23rd April 7.30pm. This is an opportunity for our members who wish to attend, (please wear your club colours on the night) and/or participate in the community and to be recognised as a group that has a unique identity and makes a positive contribution to the community. If you would like to participate in any way please message Margaret Kearney.

Clobber Collection: Please drop your Clobber to Cairde Mór, Knockdoemore, during training or matches—shoes, clothes etc but NO bedding or towels please.

In the Minor A League North—Round 3 it finished Claregalway 4–4; Kilkerrin Clonberne 0–10. Claregalway minors had a good win over a dogged Kilkerrin Clonberne side in round three of the north board A minor league last Wednesday evening in a game played at the Lakeview grounds in Claregalway. It was a tough night for football as weather conditions were poor but it was Claregalway who adapted better on the night winning the game on a scoreline 4–4 to 0–10. Next game is V Oranmore & will be played in Oranmore on Wednesday April 20th at 7pm.

In Div 3 of the Senior League Claregalway will play An Spidéal away on Saturday April 16th at 6pm.

In U14 Ladies on Saturday of 9th April the Claregalway Ladies Club hosted the 2016 Div 1 and Div 3 Féiles as well as the Div Féile Final at our Grounds in Knockdoemore and Lakeview in Claregalway. Thankfully the weather was very good on the the day (apart from a bizzare snow storm before the Div 1 Final)

In Div 1 Claregalway defeated St Brendans Ballygar and Kilkerrin/Clonberne in the Group stages before going on to defeat Naoimh Mhuire Oranmore (who had earlier beaten Tuam/Cortoon and Corofin in Lakeview) in the Féile Final in Knockdoemore. Mags Fleming the County Secretary presented the Trophy to the winning captain Laura Flynn and wished the Claregalway Ladies all the best in the National Féile in June 24–26.

In Div 3 our Ladies B Team played admirably against Loughrea and Gráinne Mhaols but they were out matched in both games but to their credit they never gave up during the matches. Salthill/Knocknacarra defeated Gráinne Mhaols in the Div. 3 Final

We would Like to thank all the parents who brought food to the grounds on Saturday and to all the parents who did such a wonderful job in feeding and catering to the large groups of players, mentors and families during the day. Thanks to Liam Higgins and anyone who helped with the parking and safety issues on the day and thanks to Tony Stephens for opening up Lakeview and making the pitches available on short notice. Finally thanks to all the players on our Féile squads who represented our Club with such class on Saturday. Training continues on Monday 6.30–7.30pm and on Saturdays from 5.30–6.30pm.

The Junior ladies played Claremorris in Lakeview in the Connaught League on Friday night. This was a close game in the opening half with three late goals leaving Claregalway with a 3–2 to 0–2 half time lead. Aided by a stiffening breeze the Claregalway Girls added on the points in the second half to run out easy winners.

The Seniors received a w/o from Glencar Manorhamilton in their opening round. The Seniors play Annaghdown in the Division 1 League on Saturday next April 16th in Knockdoemore Park at 6pm. Please support.

The Juniors are away to Micheal Breathneachs also at the weekend with time and day still TBC. Training for both Junior and Seniors is on Mondays in Knockdoemore Park at 6:30. Well done to the Galway Seniors on their League win over Dublin in Parnell Park last Sunday. Good luck to Andrea Trill and the Galway U16s who open their campaign against Roscommon on Wednesday April 13th. The U8 and U10 Girls have returned to training on Saturday’s in Knockdoemore Park at 4pm. New Girls most welcome. Congrats to the Clubs U14 Girls who won the Div 1 Féile in Knockdoemore Park on Saturday. They now head to Cork in June for the National Finals. 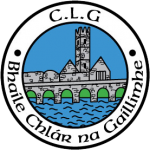 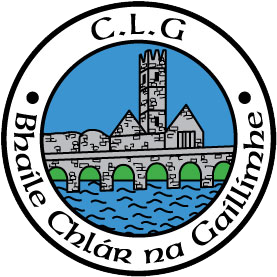