A Claregalway teen has lined out for her country after earning her first cap for Ireland having played for the Irish Schools U15 Team.

Sinéad Donovan, 14, is a second year student at Coláiste Bhaile Chláir and was selected for the Irish squad that took part in the Bob Docherty International Tournament in Wales last week. 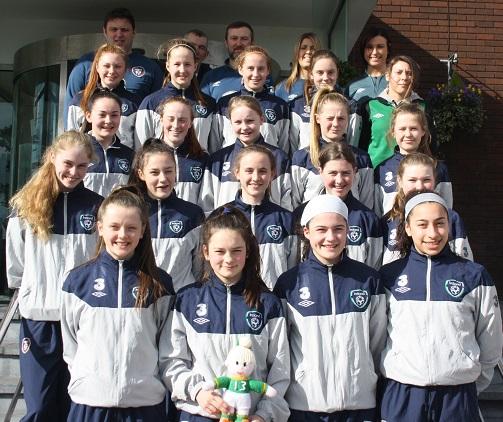 Sinéad is pictured in the Ireland team photo before their game in Cheshire. Well done Sinéad!

Her International career began earlier this year when she lined out for Ireland in a friendly against Northern Ireland, where she was named player of the match.

Sinéad’s proud parents Una and John travelled to Wales with their daughter, who has been playing for the Connacht Schools U15 girls’ team for the past two years.

“She has been chosen for trials with Ireland for the past two years and while she made it to the final 22 players selected last year, this was her first time breaking through to the final squad of 18” said John.

“She’s always been a very keen athlete, as are her younger brother Seán and sister Niamh, with all three playing for Claregalway-Cregmore FC as well as with Claregalway GAA in camogie, hurling and Gaelic football.

“We all made the journey over to Newport in Wales for the tournament and it was a very special moment for us as a family seeing her play in the green jersey,

“For them to win both group games, beating Wales 5–0 and Northern Ireland 3–1 was incredible as it meant Sinéad would be playing in the final. She was named as a sub but when she got on in the second half she played her heart out and while Ireland dominated the final 20 minutes of that game it wasn’t enough to beat a really strong England team.

“But the whole experience was amazing and she has her official cap, which she was presented with on the Sunday night in front of the players’ families and officials from the FAI.  She also has a participation medal from the tournament so all in all it was a wonderful achievement and we are all very proud of her.”

Sinéad has also taken part in camps earlier this year as part of the FAI U16 girls’ team and is hoping to secure further trials for that squad later in the year.

Apart from her sporting success the teenager is also a talented musician, having come second on the BEO Ireland Irish song competition with a song she wrote with a group of her school friends in Coláiste Bhaile Chláir.