Carnmore defeated Kiltormer in the Relegation Playoff in terrible weather conditions in Kenny Park on Friday July 15th on a score line of 3–9 to 0–12. In what many will consider the most important game of the Senior Championship the consequences of defeat were huge as both sides put their long and proud Senior status on the line in a game that did not disappoint.

Kiltormer playing into a stiff breeze in the opening half started the better and lead this game by 0–3 to 0–0 after ten minutes as Carnmore struggled to work the ball out of their half. That said Carnmore looked comfortable in defense only conceding a single score of the opening three from play, the other two consisting of a free and a sideline cut. Both teams struggled to find the net in the group stages of the championship this season and whoever could nab one or two in this game would go along to winning it.

Carnmore’s first goal came midway through the half when a Barry Hanley free was flicked to the net by Martin Kelly to cancel out the strong start by the East Galway men. Back on level terms this game started to open up as Carnmore begin playing with more confidence with scores from Barry Hanley and another goal by Jason Byrne set Carnmore in a strong positon at the break at 2–4 to 0–5. Kiltormer with the aid of the breeze and elements pushed up field in search of scores as Carnmore were forced to work extremely hard to hold their lead.

Kiltormer continually pressured Carnmore and found seven second points and brought the game back to two points at one point, however the workrate of Carnmore was hard and honest and coupled with Barry Hanley frees kept the men in red at arm’s length. As the game came to a close Kiltormer desperately pushed for a goal to tie the game but their need to press forward was their downfall as a break from Carnmore saw Kevin Killilea net Carnmore’s third goal at the death to secure Senior status for the 2017 season.

Since a County Final appearance in 2014 the level has been set high for the Intermediate ladies with championship silverware a realistic goal and with three wins from three in this year’s group stage they are now only two games away from reaching claiming the title. Carnmore who had been on the road for their opening two games at Craughwell and Clarinbridge were able to finish the group phase at home with a solid 1–23 to 3–4 to Kiltullagh/Kilimordaly. Carnmore will now await the result of the other group to know their semi final opposition. 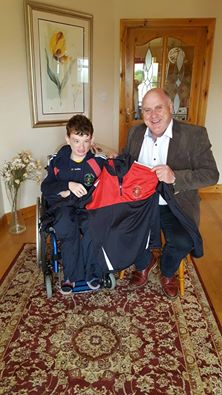 Dylan McLoughlin was recognized by Carnmore GAA as the Club’s outstanding supporter and presented with a Carnmore top by Chairman Noel Grealish. Dylan, who is rarely if ever absent when the reds take the field has been one of the club’s most dedicated supporters and members for some time now. Congratulations Dylan, keep up the good work!

Carnmore faced off against Kiltormer-Mullagh in the U16B1 Final decider in Duggan Park Ballinasloe. When these teams met in the group stages Carnmore lost by four points after a strong first half. Unfortunately this result would repeat itself as Kiltormer-Mullagh would take the spoils 1–13 to 0–12 after a hotly contested affair. Carnmore started the better and right from the off were very composed and comfortable in possession. At one point Carnmore lead by 0–3 to 0–1. The teams would continue to trade points with some top drawer hurling on display. Kitormer-Mullagh would finish the stronger adding three scores in row to lead 0–7 to 0–6 at the break.

The opening minutes of part two would prove the deciding period as a quick fire 1–1 from Kiltormer-Mullagh gave them a five point buffer which Carnmore would fail to break down. Carnmore to their credit matched them score for score from this point on and at one point reduced the margin to two points. Carnmore could have had the tonic goal needed but the ball came off everything but the back of the net before finally being put out for a 65. Carnmore’s near miss would prove costly as KiltormerMullagh would open up their five point lead once more and Carnmore for all their effort would not make any further inroads into this with little time remaining. Despite the loss it has been a huge year for Carnmore Juvenile Hurling and this young and very talented U16 side were key to this success.