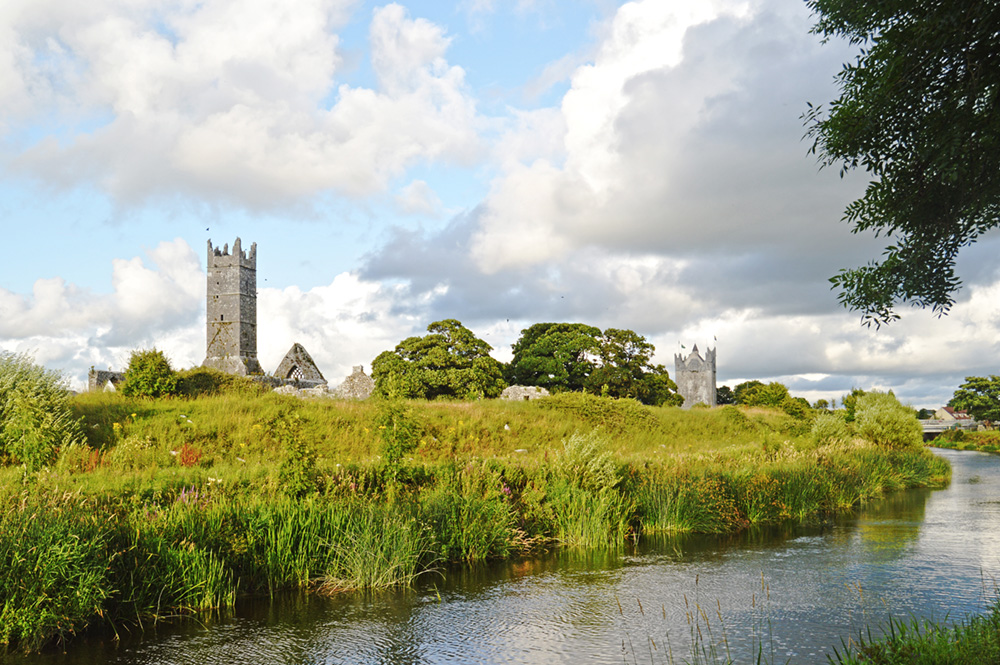 The village is looking resplendent thanks to all the hard work undertaken by the Claregalway Tidy Towns committee. This summer, more flowers were planted, landscaping was done and signs were erected. The following is a report from the official Tidy Towns adjudicators, who visited Claregalway in July and assessed the area on a number of criteria, awarding Claregalway a total of 253 points out of a possible 400 (two points up on last year). The committee is commended on the completion of your excellent projects for the 2014 Tidy Towns Competition and it is great to see the appearance of Claregalway improving as a result of your work. Well done and keep it up!

Claregalway is warmly welcomed to the 2014 SuperValu Tidy Towns Competition. Thank you for the completed entry form with delightful stylised map, the outline three year plan and the very revealing pictures of your activities. The splendid success is the restoration of your fine Castle which is outstanding and compliments to all involved. We admired the many arched former road bridge with its hanging baskets and the exceptional floral planting between it and the Castle. The through traffic volumes were as remembered very heavy. The tall robust stone walls on the N17 North help to sustain the character of the town. Many commercial premises are available and awaiting occupiers. We admired the splendid Abbey and compliments on the information plaque provided by the Cloonbiggeen residences association and Galway County Council. As usual the SMA house was impeccably presented.

The visually important site occupied by the Catholic Church at the junction was very well presented; a pity no flags were flying on the two poles provided. The thatched cottage beside the pub looked very well. The Franciscan Friary and its grounds are presented in an exemplary fashion. We admired the very excellent floral display at the small Treat Café. The Dental Surgery grounds and the building itself were neat and orderly. Beyond Beauty caught the eye. Pride of Place easily goes to the Castle itself with the splendid Manor House; this was an excellent display and enhances the entire centre. The National School on the N18 and the Educate Together School also on that road were admired. The extent and range of historic buildings, structures and locations certainly make us look forward to the proposed Heritage Trail. Complements to the two hotels—The Arches Hotel and Claregalway Hotel on their fine displays using ample flowers to create a delightful welcome expressed in colour. The newly repainted SuperValu was admired.

Greatly admired was the extent of ground planting between the newly restored Castle and the Arches bridge. This was most colourful on the day of adjudication featuring strong red and yellow planting which was greatly admired. The old cemetery and its extensive car park was neat and well presented. We are glad to note the absence following removal of the former alcove which had become an unofficial dumping ground at the top left of the car park. The new modern cemetery was well presented, neat and orderly. We admired the very many flower beds and planters that were to be seen and single out for special mention the really fine three- story planters on the bridge. The very thought provoking installation on the N18 south of raising stainless steel was always intended to be seen raising from the water at its base. Has that essential element been discarded for some reason?

The survey of birds found in the vicinity totalling twenty species certainly stimulates the appetite and must encourage you to double your efforts to provide the long sought for River Walk. The provision of interpretive signage on such a facility would greatly enhance the locals and visitors enjoyment of this centre. We wish your efforts working with the schools perhaps and others will shortly bring this exciting option to full fruition. We are glad to learn that the County Council and other TT groups are providing various aspects of advice and assistance to help this greatly awaited project achieve reality. It is important to engage with the schools to help the pupils gain an awareness and appreciation of the bird and wildlife that is all around you in Claregalway.

Well done on the various discussions taking place with a view to highlighting the need for us all to reduce, reuse and recycle. Work of the Junior ECO/Community Development is especially meritorious and will no doubt help to get the message out to the widest possible audience. Forms are available to conduct a survey at individual household level. The results of these surveys often indicating the extent of purchased food which is not consumed which is not untypically in the 25% to 33% range. This and other costly and unnecessary household expenditures are a substantial wakeup call for many householders. Congratulations to the schools on securing their Green Flag status.

The related activities of litter control and tidiness have been amalgamated this year into one composite category. Well done on the absence of litter on the approach roads. We applaud the signs noted Keep Claregalway Litter Free’ Well done on the decision to establish rotas for volunteer groups and Residents Associations to Adopt a Road and regular clean-ups there. The sign pointing to the very significant ancient cemetery at the Friary would benefit from washing.

Your streets and roads continue to be very well presented and well done on securing a regular road sweeper to aid in this necessary task. Your work on examining and removing where possible service signs particularly those on pavements is noted and on the day of adjudication significant improvement on previous years was observed.

Well done on the success of your various competition aimed at the resident groups. Your experience mirrors that of many other centres which suggests that these competitions are an excellent way to generate interest and additional involvement. Compliments to Lakeview Estate which was very well presented; their communal grassed areas and planting against the backdrop of the tall fine robust stone boundary wall was a delight. Some minor amounts of weeds outside the curbs detracted somewhat. Slí an Bhradáin development of pleasant detached houses was being well maintained. Without exception all of the windows were sparkling which gave a delightful overall impression of this estate. In Gleann Mhuiris estate many houses remain awaiting occupiers. There is a further unfinished estate behind a substantial blue hoarding which itself needs attention. The estate behind the Claregalway Hotel was very well presented. The apartment block behind the Arches Shopping Arcade would benefit from painting. It is apparent that many of the residences are striving manfully to improve their area.

Certainly Claregalway endures very heavy traffic volumes many times each day. We admired the splendid village name plates in carved stone. Is it intentional on the N18 that the stone while facing them is not on the side of approaching traffic? The new planting on the Tuam Road has enhanced this vista greatly. The most attractive substantial natural stone walls are a strong bonus. On the Tuam Road a dry fill stone wall on the right has unravelled somewhat and hopefully will receive attention before next year’s adjudication. 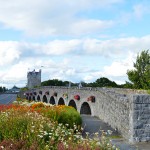 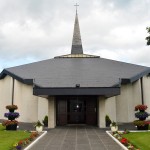 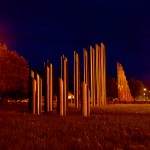 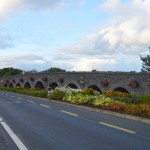 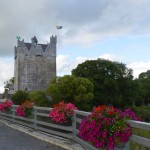 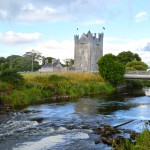 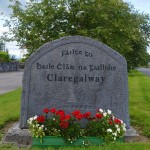 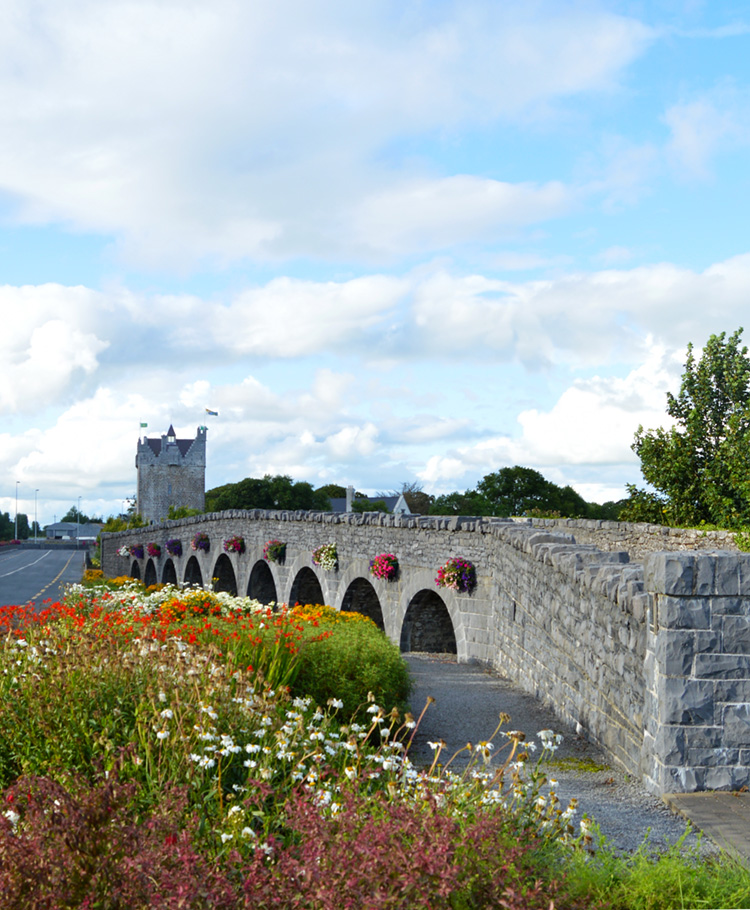 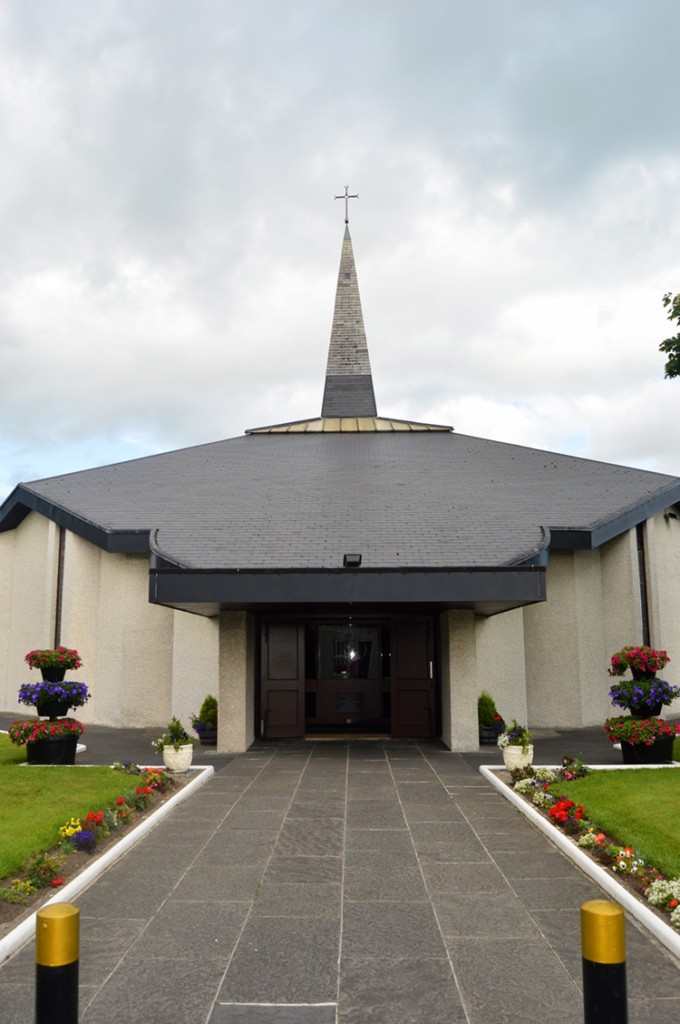 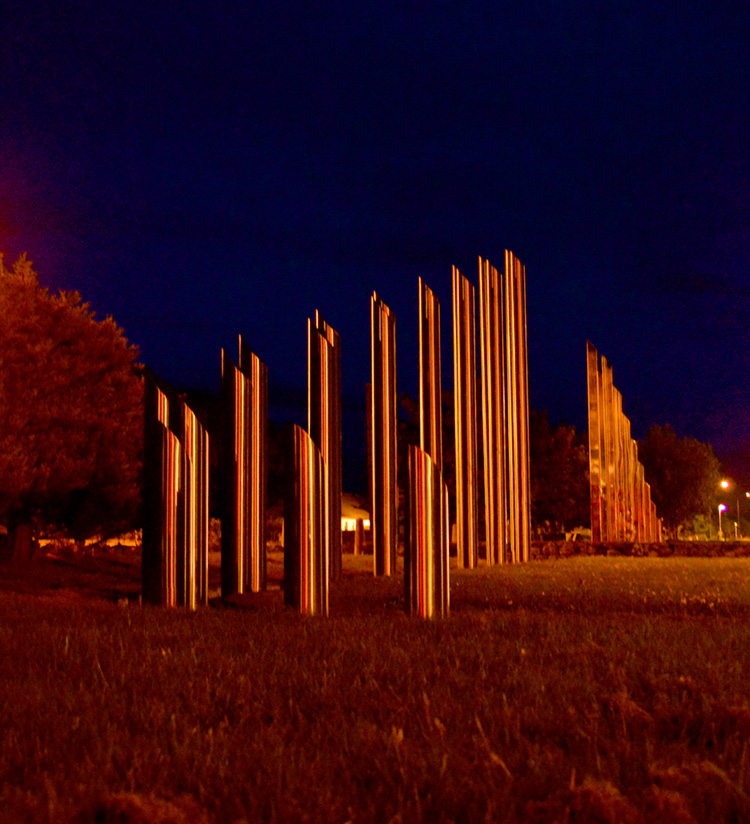 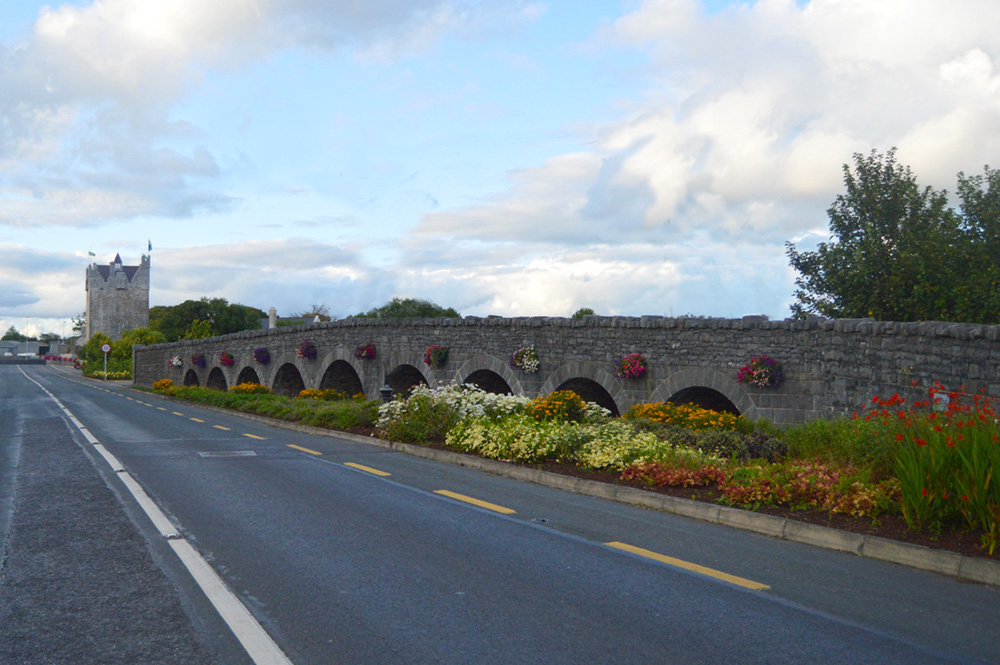 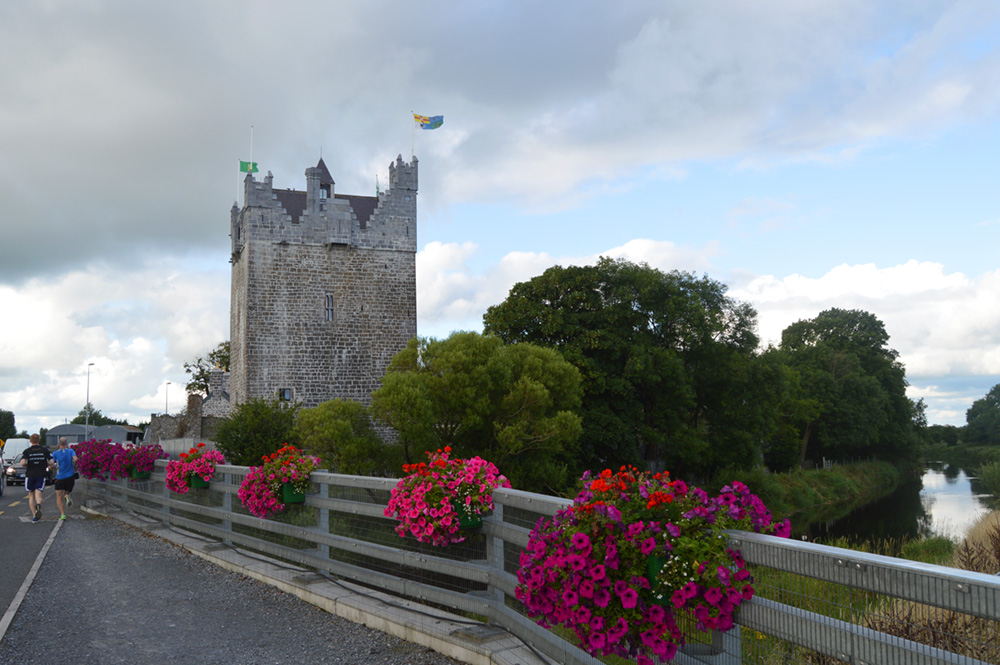 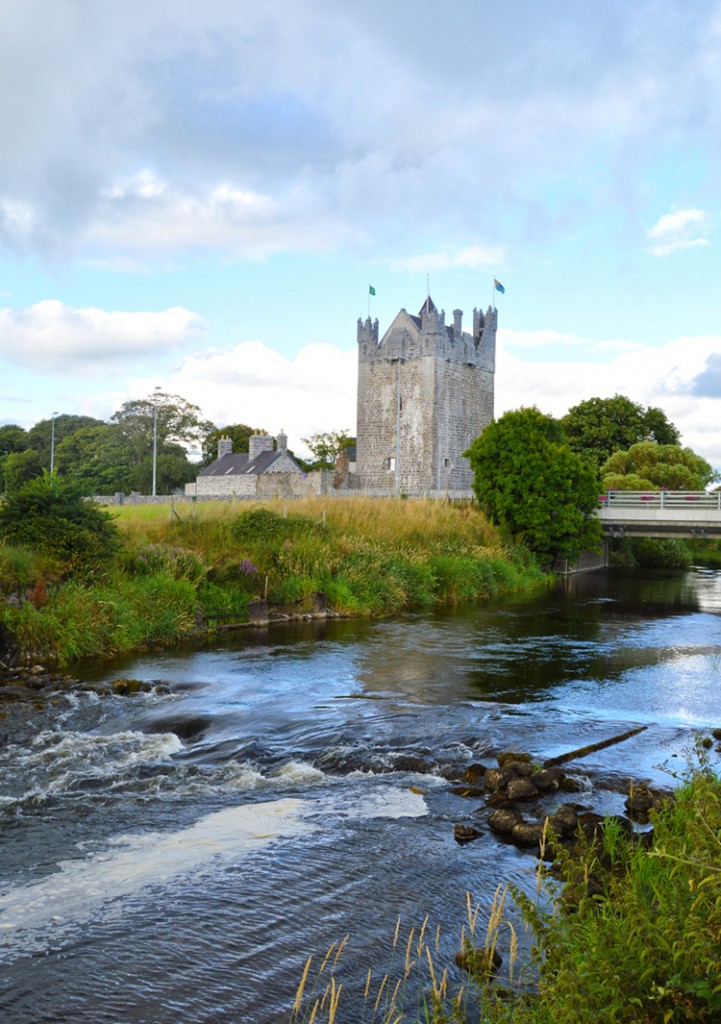 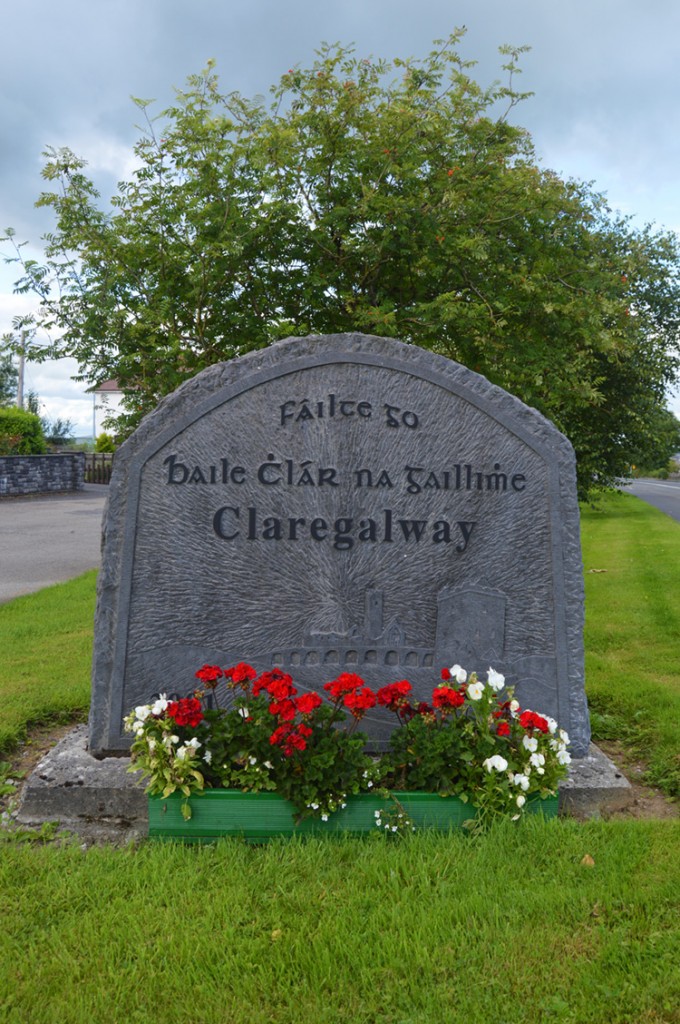