I have noticed over my life, that to be a good person one does not need to depend on religion, status in life, job status, race, skin colour, what country they are from, political views or culture. It solely depends on how each of us treat others. I have also noticed that our ears are constantly bombarded each day by all sorts of sounds. And these sounds we hear stress a certain kind of hearing whether they are joyful or sad.

The cries of the poor does not go away. And although I believe that god is on the side of the poor, I somehow feel in our society and culture today, we have found ourselves separated not only from each other, but from the poor, the orphaned, the abandoned and the homeless. We live in a world that insulates us, for the most part, from that which is difficult and uncomfortable. We have diversions that keep us from encountering the pain, the loneliness, the weakness, the fear, the emptiness, the meaninglessness of those around us. We even have diversions to keep us from encountering our own pain, loneliness, weakness, fear, emptiness, and meaninglessness.

The more separated we are from real love and compassion, the more lifeless we become. The average years we live in Ireland is around seventy odd years or so. It’s a short life span when you look at how old our world is. For me and people like me I have about fifteen to twenty years left to live, in the scheme of things. So think of those times in your life when you have exercised real love and compassion. Think of the emotions that filled you, the love that you expressed, the tenderness you felt, the wonder of being human that you knew. In the moments that you exercised that true love and compassion you were truly alive. Keep trying to make those moments. Here is a true life story that I experienced recently.

The Self Help Africa Charity Ball

I am organising the upcoming Self Help Africa Charity Ball in the Hotel Meyrick in Eyre Square and was recently at a meeting with the manager Cian, trying to persuade him to give us the cheapest deal going so that we can raise as much funds as we can for the poor of the various countries in Africa that we are trying so hard to help and support. In my book the poorest of the poor.

It was the wrong time for me to drop in on Cian as there was a lot of people checking in. There was only Cian and one young woman behind the desk, and you could tell they were both under severe pressure. The phone was ringing, and they were both trying to process the people who were checking in and Cian was trying to deal with me through the corner of his mouth with a nod and a wink as I was asking him for his best price for the meal for the charity ball, as both of them were trying to be sensitive to the complaints of how long it was taking for the people who were trying to check into the hotel.

I was frustrated myself, and could see Cian’s and his colleague feelings of being overwhelmed. But I didn’t do anything to help. After all, what could I do? All of a sudden, a couple moved right up to the desk without paying any attention to the other people and myself. They handed Cian and his colleague a small white cardboard box. They said, “We brought you a piece of iced carrot cake.” Cian and the young woman’s face lit up, a big smile found its way to their faces, and they heaved a huge sigh of gratitude and joy.

It seems that the couple had asked when they checked in where they could go to dinner. As if Cian and his colleague didn’t have enough going on, they also had to act as the concierge giving restaurant and cafe recommendations. They mentioned the nearby Malt House restaurant that had a great variety of food, their favourite, Cian had said, was Iced carrot cake. Somehow in the midst of all that chaos, this couple heard the cry of that poor harassed hotel manager and his colleague, and brought them a piece of their favourite cake. That was an act of real love and compassion. That was in a first world situation, hearing the cry of the poor. That was a simple act that gave life to the hotel manager and his colleague and also to the couple who brought them their cake.

Hearing the cry of the poor always comes at some cost. It always forces us to acknowledge our own wealth in comparison to the one who is poor. It puts us in a place of vulnerability where we may need to give up our own plans and agendas. It can seem overwhelming and frightening. Sometimes it can feel like it’s just too much for us to do with the resources we feel we have available. For the couple who brought the hotel manager Cian and his colleague a piece of cake, the cost was probably around €3. But it wasn’t how much it cost, it was their action of love and compassion that was answering the cry of the poor. And there is so many different cries of the poor in our country and our world. How are you answering that Cry of the Poor in your life and times?

Thought for the Week 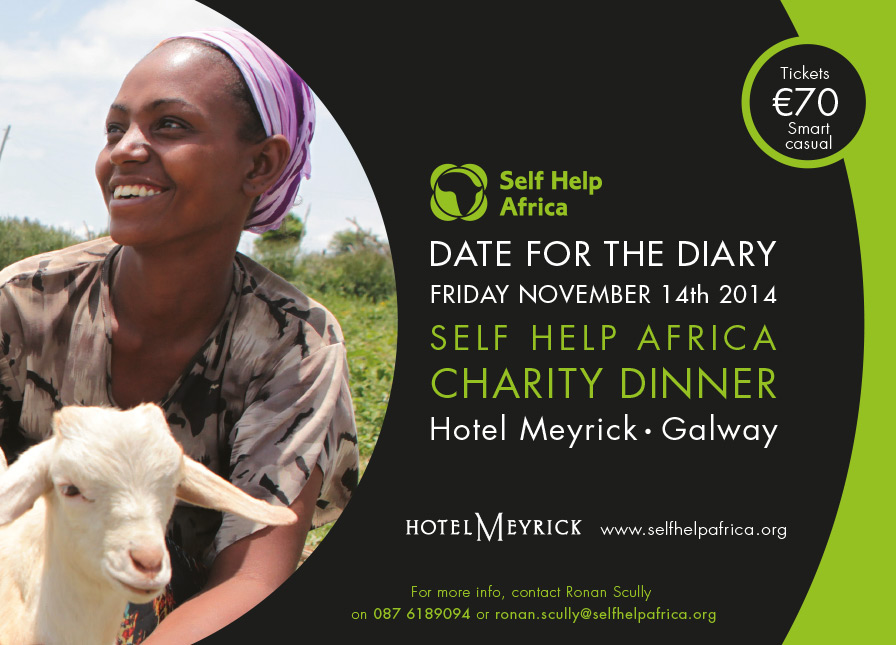 PS. The Galway Self Help Africa Charity Ball is taking place in the Hotel Meyrick, Eyre Square, Galway on Friday the 14th of November and tickets are €70 with all proceeds going to the poorest of the poor in Africa. If you would like to come along contact [email protected] or call Ronan at (087) 6189094. Thank you for everything.