For three decades, Josette Farrell has been at the heart of all community events in the Claregalway area. Now she believes that community initiatives that she has developed there could easily be copied in other towns and villages in the county.

As a community facilitator, she founded and edited one of the county’s top local information newsletter Nuacht Chlair and its online counterpart Claregalway.info. In these two media platforms, for decades, she has documented and photographed all that has gone on, ensuring that all strands of community life were brought together.

Her innovative work on the community initiative The Hub has been a tremendous success, providing a community space for courses, information, printing and drama. Ms Farrell believes that they can be replicated to great success in other villages of a similar size to Claregalway.

On Friday, she runs as an independent candidate, determined to  bring those three decades of determination to the chamber in County Hall in order to improve community life in her area.

“This is a community space where we offer computer classes, art classes, drama lessons, printing and advice on a wide range of community initiatives.  If someone has a good idea for the community, they can bring it to the Hub and together we can ensure it happens,” she said.

Since moving to Claregalway more than thirty years ago, Josette Farrell has been actively involved in a wide range of local groups and societies.  While raising her six children in a rapidly expanding Claregalway village, she volunteered to be Chairperson of Claregalway NS Parent’s Association, giving her a first taste of community involvement. She oversaw the introduction of the school uniform and with her growing family, also took part in a number of after school activities, giving her the opportunity to meet dozens more local residents.

It was during conversations with residents and friends that Josette realised that, although Claregalway’s population was rising significantly, facilities for residents in Claregalway were lacking, and decided that something needed to be done.  For the next thirty years, she has been at the centre of all these initiatives.

The bridge at the centre of the village was unburied and restored and is now a centrepiece; a group she energised secured grants to restore three local dilapidated townland pumps and erect a system of townland name stones, which can be seen at the entrance to each townland in Claregalway as well as the Welcome to Claregalway stones on the N17 and N18.

Around this time, in August 1996, Josette formed a small committee to re-establish a monthly community newsletter – Nucaht Chláir – and has been the Editor ever since.  As Editor, Josette has endured the extraordinary voluntary task of compiling local news every month, arranging local sponsorship, printing and distributing the newsletter locally, as well as maintaining the popular Claregalway,info website and Facebook page.

As well as undertaking large-scale local projects, Josette Farrell is very active in many smaller local groups.  She volunteers every week in Never Too Old, the charity shop set up to fundraise for Claregalway & District Day Care Centre.

Last year, she was instrumental in opening The Hub – an invaluable community space in the village where courses, advice, classes and lectures are held for the betterment of the community.

However, she feels that there is still a lot of work to be done in Claregalway, especially in areas of providing a playground for children and more accessible facilities for people of all ages.

On Friday, she hopes that her three decades of service for her community will be recognised by all those voters whose lives she has enhanced.  Reaction to her campaign on the doorstep has been very positive and she is hopeful that all who have been impacted by her will give her a high preference in their voting. 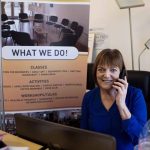