Farewell to a West of Ireland dad 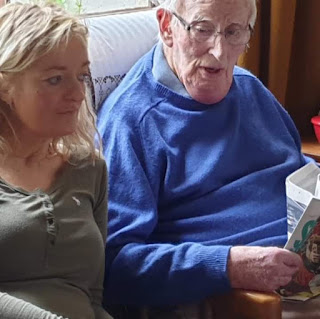 If there is one thing my family learned over the past nine months or so, it’s the amazing public health system we have out in our communities here in Ireland.

A team of nurses, carers, and staff from our local pharmacy were on call every day of the week to give my father as comfortable a life as possible and to fulfil his wish of dying in his own home.

Thanks to our public health care professionals, and the support of a loving family, my dad had the most peaceful death anyone could ever hope for. He had spent an entire Sunday surrounded by people who cared for him, before deciding to leave this world just before 1am on a Monday morning.

Last August, we saw the other side of the Irish health service when, at 93 years of age, he was forced to spend 48 hours on a trolley in an overcrowded Emergency Department after sustaining a fall in the family home.

Never a fan of hospitals, all Micheal Tierney wanted was to get home to his own place. And, thanks to a rota devised by his family, the support of care workers who called twice a day, and an amazing Public Health Nurse, we managed to let him realise his dream of staying in the home and the neighbourhood he adored.

Our public hospitals may be in crisis, but the care provided to our most vulnerable in their own homes and communities is second to none.

My dad showed the true spirit of a fighting Irishman.

He lived far longer than the few weeks he was given back in January and even defied the doctors to be still with us when his beloved son, Micheal Junior, flew in from New York 48 hours before he passed away.

Family meant everything to my dad and it was the love of his family which drove him on, confounding the nurses and doctors with his determination and will to live over the past few weeks and months.

After he had been told never to climb the stairs, my sister came into the house one day a few months ago to find him frantically cycling on a gym bike he had installed in an upstairs bedroom. On another day recently he went upstairs to “sort out the bills” because our mother “knew nothing about them”!

His generation, born in the first few years of an independent Ireland, were made of stern stuff. Most of his aunts and uncles had emigrated to the United States in the early part of the 20th century, because of the grinding poverty in Co Galway at the time, and he used to recall trying to pinch bread from the priests in his boarding school in the 1940s.

It was hard for him to see his strength go, to have to get people to put him to bed at night, but amazingly he became firm friends with some of his carers and could be heard laughing and joking with them as they helped him get to bed at night.

How amazing it was for his adult children to see him befriend carers from Malaysia, the Philippines, Holland, or Mayo, after his initial reluctance to even allow them into his home!

In the West of Ireland, in particular, we tend to do funerals and dying with great dignity and compassion.

We spent three hours shaking hands as literally hundreds of people made the effort to get to the Funeral Home. Such a tribute to a Civil Engineer, almost three decades on from his retirement from the local authority, would not be deemed unusual in this part of the world.

An amazing priest, Father Martin Downey, brought great peace and comfort to the family home when he made three house calls in the last few weeks of his life, as it began to dawn on my dad that his race was run.

My father only stopped jogging at 84 years of age, after embracing the fitness craze of the 1980s, and the medics were astounded by both his physical stamina and determination to live for as long as possible.

The staff at our local chemist in Galway City made the family feel that our father was the most important man in the world and a gentleman – they would repeatedly offer to call down with medicines, even giving us their mobile phone numbers if we ever needed them when the shop was closed at 3 or 4am.

That kind of personalised service would be unthinkable in many parts of the world.

And the neighbours rallied around over the past few weeks of his life, repeatedly calling in with cakes or ready-cooked meals. It was impossible not to shed a tear when they formed a Guard of Honour outside his home for his final journey.

His last day on earth was a perfect Sunday in a West of Ireland household.  His adult children did not feel guilty about leaving his bed side to watch a championship hurling game between Galway and Wexford on television, because that’s exactly what Micheal would have wanted.

Indeed, his beloved grandchildren, who gave Micheal so much pleasure in his later years, were dispatched to give him regular updates from the game every five minutes or so.

His six year old grandson, Mateo, would tell him “Ganga, it’s Ireland ten points, Waterford five” (It didn’t seem to matter that it was actually Galway against Wexford!) and granddaughter Sofia would report back that his pulse had settled every time Galway scored.

Like many Irish families, we grew up loving Sunday dinners and GAA games on television during the summer months.

Growing up in tough times, education was very important to my Dad. He might have seemed to be obsessed with education when we were teenagers in the 1980s, but – like many West of Ireland people of his generation – he saw it as a way out of poverty.

So many people from his area and generation were forced to emigrate in search of new lives that he and his friends wanted as many opportunities as possible for their children. They knew all about the heartbreak of people being forced to leave their homeland against their will.

These days, of course, we are connected by technology and the cousins in New Jersey or California don’t seem to live so far away any more.

He gave his children a life-long love of travelling since we used to go camping every Summer on the West coast of France in the 1980s, where he met some amazing life-long friends from throughout Ireland. Before that, virtually nobody he knew could afford to go abroad and our family holidays were spent, often in pouring rain, in Donegal.

He also gave us a love of nature. In Galway we are blessed to live beside Connemara, the Burren, and the wild Atlantic Ocean, and he loved to swim in the chilly waters of Galway Bay.

He has given all of us a love of the outdoors, an appreciation for healthy living, and a sense of justice and fairness which ensures that, like many Irish people, we always seem to root for the oppressed or the underdogs.

As children in the 1970s, we were thrilled when he allowed us to get up at 3am to watch the Mohammad Ali versus Joe Frazier fights as small kids in the 1970s.

Like virtually every West of Ireland family, America and Americans were always close to his heart. His own father, Martin, had spent five years working as a tram conductor in St Louis, Missouri, a century ago and used to joke that he wished he’d never come home!

There was a lot of heartbreak involved in emigration in those days – none of dad’s uncles or aunts ever made the journey home – but he got great joy in rekindling friendships with the New Jersey first cousins when transatlantic travel became affordable for ordinary Irish and American people.

Ireland is not a perfect country by any means, but the outpouring of affection, love and compassion which surrounds the death of an elderly Irish person after a long illness shows that that we do live life the way it should be lived, when it comes to family, community, and respect for the elderly here in the West of Ireland.

“May he Rest in Peace”

In the last few weeks of my father’s life, my family received wonderful support from the Irish Cancer Society which allowed him to stay in his own home. You can find out more here

—  * Ciaran Tierney won the Irish Current Affairs and Politics Blog of the Year award at the Tramline, Dublin, in October 2018. Find him on Facebook  or Twitter here. Visit his website here – CiaranTierney.com. A former newspaper journalist, he is seeking new opportunities in a digital world.