A very positive meeting was held last week between An Taoiseach, Brian Cowen and Deputy Noel Grealish regarding the recent flooding in the locality, at which a commitment of funding was secured to address the problem as a matter of priority.

This meeting was also attended by local Cllr. Jim Cuddy.

‘At our meeting I asked that funding be allocated to carry out a study as to why almost thirty houses flooded in the Claregalway, Turloughmore and Carnmore areas and for remedial works to be carried out,’ said Deputy Grealish.

‘I have now secured a commitment from An Taoiseach that funding will be allocated to complete this study and for the OPW to carry out remedial works to try and prevent this happening again in the future.’

‘I have organised a meeting for Tuesday night, 15th December in the Arches Bar, Claregalway with representatives of the OPW to get the opinions of local people on this issue and to discuss the way forward.’

‘A further meeting will be held early in 2010 with Minister Martin Manseragh, who has responsibility for the OPW and his officials, to discuss and finalise the best way to try and prevent future flooding.’

‘At my meeting with An Taoiseach, I also proposed a scheme to indemnify homeowners, who cannot get insurance against future flooding and this proposal is currently with the Department of Finance for consideration,’ he said.

‘I also discussed a number of other issues of importance locally at my meeting with An Taoiseach, including the Claregalway Sewerage Scheme and the Claregalway Inner Relief Road.’

‘Following the meeting, I secured a commitment from the Minister for Transport, Noel Dempsey that the Claregalway Inner Relief Road would proceed to CPO early in 2010 and that funding would also be provided for the construction of the road.’ 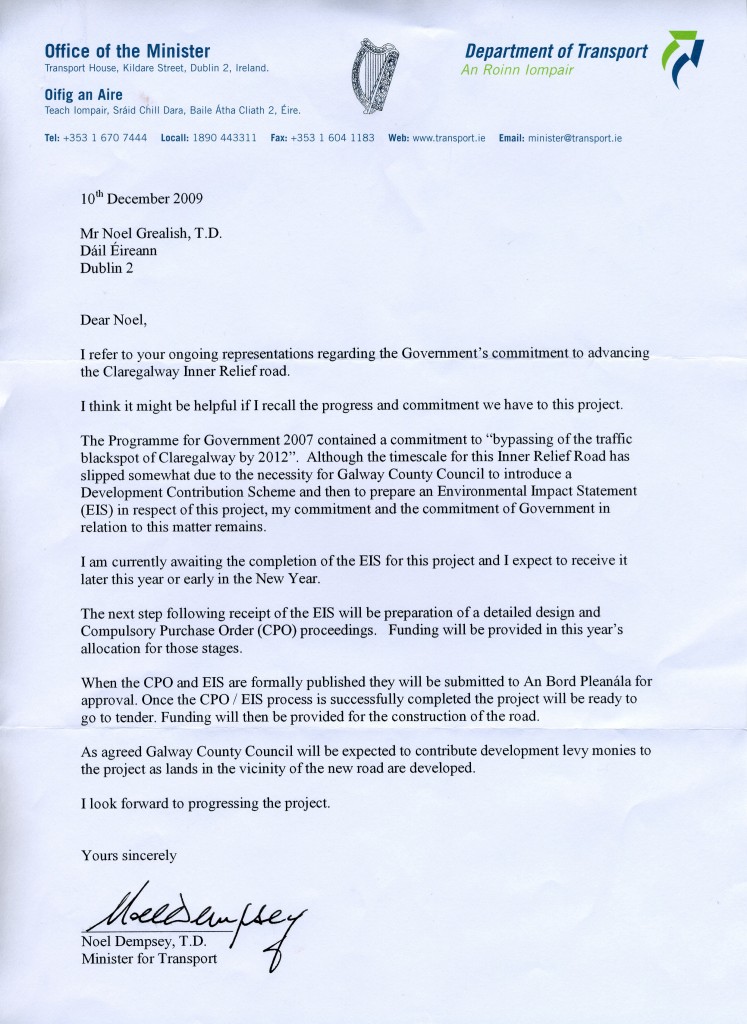 ‘I have attached a copy of the letter, which I have received from the Minister for Transport regarding this issue.’

‘Rest assured of my full commitment on these local issues and I will ensure that every possible step is taken to try and ensure that the flooding, which occurred in recent weeks does not happen again in the future.’ ‘I would also like to take this opportunity to wish you all a Happy Christmas,’ Deputy Grealish concluded.