Galway has a multiplicity of festivals, all honed over the years into something special. But none of these made the instant impact that the Galway Garden Festival did when it was inaugurated last year, over two days of differing climatic conditions at the beautifully-restored Claregalway Castle.

The thousands who thronged to the Castle for that event knew it was something special – for the first time in centuries, people moved in droves on its grounds and now it is to happen all over again with this year’s festival to run over two days on Saturday July 9 and Sunday July 10.

It was a tremendous event which breathed new life into the village, but which also created a wealth of funding for the Irish charity which treats blindness and debilitating eye conditions in many areas of the developing world.

For the event, well known eye surgeon Eamon O’Donoghue threw open the gates of the restored Castle and people came in their thousands, to look, to experience and to hear what was a high level of horticultural debate that won the event many friends right across these islands.

Nearby fields were thrown open to accommodate all the cars, and this year, a free courtesy bus will run each hour from Ceannt Station to Claregalway so that as many people as possible can get to the building and view the marvellous array of stalls and goods on offer within the confines of the splendid Claregalway Castle.

There will be live music, food stalls, goods stalls, arts, crafts, storytelling, childrens entertainment, specialist book stalls and a general air of conviviality that will charm the hardest of souls.

This year the emphasis is on trees to mark the fact that 2011 has been names by the United Nations, as the International Year of  Forests.

Entry to the event is just €5 and all of this will go towards CBM – an international Christian development organization, committed to improving the quality of life of people with disabilities in the poorest countries of the world.

Were it not for his drive and, pardon the pun, vision, the Castle would be left to fall like the 27 other Castles which are in various states of ruination in the hinterland of Claregalway and Turloughmore and Knockdoe.

When he acquired the Castle in 2000, the building was in danger of collapse.  The roof of the Castle had been removed in 1653, following the infamous siege of Galway by Cromwellian forces.  It is appropriate that trees are this year’s theme as up to a few years ago, mature trees sprang from the upper floors and the stone work was under threat.  A major reconstruction programme was drawn up under conservation architect David Johnson, a former inspector of national monuments with The Office of Public Works.

Eamonn O’Donoghue never forgot the childhood picnic shared with his brothers and sisters and parents beside the bridge at Claregalway Castle.  His father, Tom, a Toomevara man, a great hurler, and a civil engineer with Cork County Council, had a passion for Ireland’s romantic ruins.  A photograph was taken of all seven O’Donoghues lined up grinning at the bridge.  The family still have it at their Cork home.  But Tom’s passion passed on to several of his children.  Eamonn studied medicine in Cork, and archaeology under Michael J O’Kelly, the man who brilliantly interpreted the ancient tombs at Newgrange.

Shortly after his appointment as ophthalmic surgeon to the Western Health Board (HSE), Eamonn set out to find the Castle.  He had no idea where it was, except that it was near the city.  He drove out every approach road to Galway until one evening there it was .. a vast crumbling tower, ivy-clad, with ruined buildings within its courtyard, exactly as he remembered it as a child.

Om that very first evening of re-discovery, Eamonn met Cannon Callanan, the local parish priest and an entertaining classicist, who told him some of the history of the area.  Taken in conjunction with the spectacular ruins of the nearby Franciscan Abbey, the medieval bridges, the village itself, the ‘ghosts’ of other buildings and landmarks (really only visible from the air), it soon became clear to Eamonn that this was a monument of major significance.  Its battlements not only protected a main road into Galway, but looked down on the ancient Barony of Clare, which originally incorporated the vast and fertile plains of east Galway, known in pre-Norman times as Magh Seola, and witnessed its evolving story.

The Castle was owned by John Buckley Jr (formerly of Spiddal House), then living in Indonesia, who agreed to sell.  The next challenge was to get the various permissions required for a major transformation, and the team to make it happen. Two friends, David Newman Johnson, former keeper of national monuments and archaeologist Leo Swan, gave moral and expert support.  Galway County Council was, from the start, supportive in principal, but there were difficulties with the many conservation agencies along the way.  ‘I wanted to do the job as correctly as possible, but there is a need to re-evaluate the evolution of conservation principals in Ireland today,” said Mr. O’Donoghue.

Delays were costly and drawn out.  And now, more than a decade later, the restoration programme is almost complete on this important 15th century tower house, one of the largest and most significant tower houses in the west of Ireland. At the festival, visitors can get a close view of the sympathetic restoration programme carried out by master builder Micheal Herwood from Cloonacauneen and French stonemason Jean Baptise Maduit.

For more information on the Galway Garden Festival, check out www.galwaygardenfestival.com 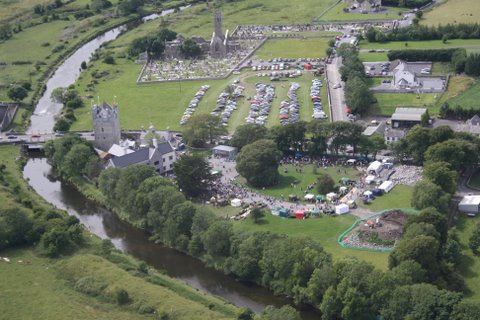