By the Connacht Tribune

THIRD-level creative arts and media students will now have the chance to work alongside established gaming and programme makers – thanks to a new collaborative centre unveiled at GMIT.

The Creative Hub at GMIT’s Centre for the Creative Arts & Media is made up of companies developing gaming projects, animated features and TV projects for the international market-place.

And GMIT students on creative arts and film courses have already commenced working on collaborative projects with four of the Hub companies – Howling Hamster, Doomcube, Moetion Films and Tribal City

Dr. Paddy Tobin, Head of the Campus, explained the rationale behind hosting the companies.

“By bringing commercial organisations, industry support, trade associations and networks together with students and academics, we have a melting pot of ideas, contacts and energy – a creative hub,” he said.

The students get the chance to work alongside established practitioners like Moe Honan of Moetion Films, producer of the 2015 animated feature ‘Two By Two’, a €4.2 million box office success in the UK and Ireland, which sold worldwide and is currently on Netflix.

A sequel and TV series is currently in development with partners in Germany and Luxembourg.  Moe sees huge potential for crossover synergy within the Hub.

“The space is open and light and the companies here can share knowledge, contacts, networks and skillsets,” she said.

“We will be working with the second year screenwriting students in a Writer’s Room.  To explain, within games, each level is effectively a story chapter and the game as a whole must have a story arc.

“In our Writer’s Room, students will be invited to pitch their story ideas for a level.  This may be accepted, workshopped, reworked or rejected but it will give an insight to the creative process and working methodology of a games company,” he said.

Alan Duggan is founder of Tribal City, which is in the process of designing a game called Runes of Aran that draws on ancient Irish mythology.

“Our ambition is for The Rune of Aran as a creative Intellectual Property (IP) out of Ireland to rival the largest games in the world and achieve brand recognition in the way that Riverdance, for example, has done in the past. We have been on campus before but the creative atmosphere at CCAM is infectious and a definite plus for us as a creative company,” he said.

Dr. Paddy Tobin is keen for the benefit to students to extend beyond their years at college and into their careers and, crucially, for this creative pathway to return to the educational cycle.

“We are putting structures in place to support internships, particularly with international hosts, and also integrating them into post-graduate programmes.

“We are further providing opportunities for these graduates to return home after and start up their own enterprises at CCAM, based on or linked to their international experience and contacts.

“The pathway opportunities then extend beyond CCAM where we are building relationship with enterprise centres in County Galway and beyond.

“So, after a period in CCAM, the new enterprise can move to partner locations and remain deeply connected to CCAM and embedded in the overall network. 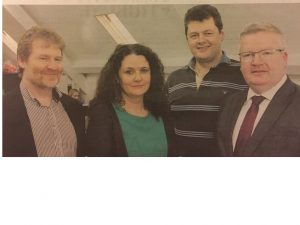