Ibec, the group that represents Irish business, has said that the N6 Galway City Ring Road is vital for the region’s future.

Ibec West Regional President Maureen Walsh said: “Traffic congestion is a significant challenge in Galway and is proving a huge source of frustration. Inadequacies in road infrastructure have led to long commutes and a chronically congested road network.

“Almost half of commuters in the Galway metropolitan area spend over an hour each day getting to and from work. Businesses are currently left with no alternative but to look to initiatives to assist employees with the traffic situation, such as changes to shift patterns that result in disruption to normal work planning. At peak times, a quarter of time spent driving in Galway is spent in congestion. Galway is now the most congested city in the country with congestion levels almost double that of Cork. Congestion in Galway is worse than in major European cities such as Rome, Madrid and Brussels. This requires urgent resolution.

“The severe traffic issues are having a direct effect on business expansion, productivity, the quality of life of employees and ability of companies to attract and retain talent. With a growing population and workforce, the traffic situation in the city will continue to deteriorate without significant investment in transport infrastructure.

“The Galway City Ring Road scheme is critical. It will lead to many direct and indirect benefits for Galway and the wider region, including increased commercial and business links, increased talent pool for businesses, significant positive effects on productivity and more efficient and cost-effective movement of people and goods.

“The Galway City Ring Road is a key national infrastructure project and will support more balanced growth across the country in line with Government policy. It will be a key growth enabler for Galway city, county and the entire region. It will generate significant positive economic impacts by facilitating the sustainable growth of tourism, employment and population. Delivery is now vital, and it must progress with added urgency.” 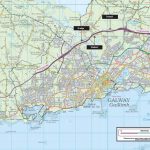