Club News: A General meeting of the Club took place on Thursday 22nd July in the Claregalway Hotel. The meeting was very informative with each section giving a comprehensive report on Club activities. A full report will be circulated to all members. Congratulations to our 4 Club ladies who were part of the Galway All Ireland Final winning team on Saturday in Ballinamore. They are Charlotte Cooney, Amy Rohan, Tara Hession and Deirdre Brennan. 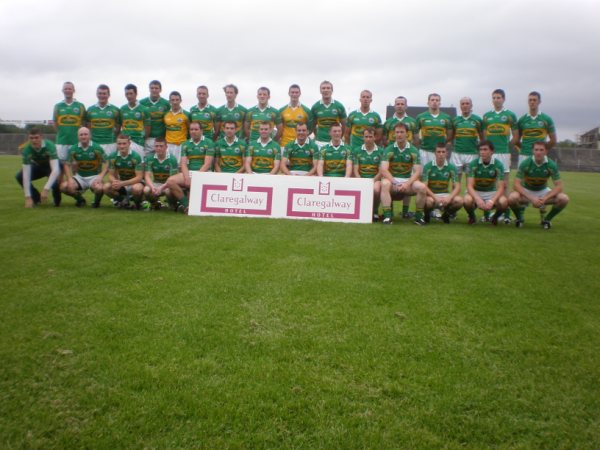 Seniors: After holding a slender lead of 5 points to 4 over Milltown at half-time, Claregalway could add only 2 points to their tally in the second half and as a consequence lost the County Championship match played at Tuam Stadium on Sunday last. The score was 0-11 to 0-7. Claregalway got on top at mid-field early on and with a good supply of the ball, points by Martin Kelly (free) and Ronan Flynn gave them a lead of 2 points to no score on 10 minutes. It should have been more because several scoring chances were created. Joe Kearney sent over an excellent point from 40 yards but Milltown responded with 3 points to tie the scores after 25 minutes. Paul McGuinness and Martin Kelly added a point each and just before the break Danny Cummins’ shot hit the upright and drifted wide. Soon after the resumption James Nallen moved to centre half after David Heaney retired injured and Milltown then gradually took control around centre field. But when Adrian Faherty pointed a 40 yard free and Martin Kelly added a well taken point when he collected a cross field ball from Adrian to again tie the scores, 7 points each, 15 minutes into the half, it looked as if the trend of play had turned in Claregalway’s favour. But from thereon it was Milltown who got the scores, a pointed free and 3 points from play. Standing in for the injured Anthony Watson, Stephen Cunniffe at full back did well and Joe Kearney’s display at wing back stood out.

Claregalway U14A boys defeated Corofin in the U14A championship final played in Tuam Stadium on Friday last 23rd of July. Claregalway began well with wind advantage and with Chris Carroll putting over our first point, this was followed by Richard Doyle, Ryan Manning, Mark Rohan, Andrew Connolly and Sean Linnane adding great points to put Claregalway ahead at half time by 0-10 to 0-1

Corofin began the second half well getting good scores but goals by Andrew Connolly and Richard Doyle put Claregalway well ahead and finished strongly with points from Andrew Connolly, Conor Shaughnessy, Richard Doyle, Sean Linnane, Mark Rohan and Ryan Manning who received man of the match. .

U-14 Ladies training on Saturday evening at 5:30. The Club will have a bus going to the Connaught Senior Ladies Final on Sunday next in Tubbercurry. Bus will depart the Clubhouse at 10am.The U-14 Team play Moydavits en route at 12 and then go on to be Guests at the Connaught Final in recognition of winning the All-Ireland Feile. Supporters welcome to come on the Bus just text your name to Joan Gavin on 0868959708

U12 Ladies next training on Monday 1st August. Training is in Knockdoemore at 6.30pm.