Claregalway U14s lifted the Coiste Peile na nÓg na Gaillimhe Féile 2013 title in style with a great win over Salthill/Knocknacarra in the final played at Pearse Stadium on Sunday last. So, once again our U14s have brought pride and joy to the Club and can now look forward to a great week-end competing with the best at the All-Ireland Feile in Derry.

Leading from start to finish, Claregalway put together many fine passages of play despite the blustery conditions. Playing with the wind towards the city end, Claregalway were quickly into their stride with 3 points inside five minutes. A fine goal by Oisin Connolly on 10 minutes, a point by Keelan Grainger and Salthill/Knocknacarra’s first point before the interval left the half-time score at 1–4 to 0–1. This final could have been as good as over at half-time as Claregalway shots for goals were denied on three occasions by hitting the posts. In the second half and aided by the wind, it was Salthill/Knocknacarra’s turn to pile on the pressure and their goal 10 minutes into the half gave them a great lift. But as they continued to sally forward in search of match winning scores, their best efforts yielded only 2 points due to the splendid display of the Claregalway backs, most notably Barry Callanan and Colm Kelly whose two block-downs in succession after the seasiders had reduced the deficit to 3 points helped to cut off their menacing attacks.

The Cup was presented to team captain Padraic Commins by P.J. Rabbitte, Chairman of Coiste Peile na nÓg na Gaillimhe to the celebratory cheers of his team mates, parents and Club followers who turned out in large numbers to support their youngsters.

In the Group C games played at Corofin on the Saturday, Claregalway had comfortable wins over Corofin and Craughwell and the match with Tuam Stars ended in a draw. Claregalway then travelled to Ballygar for the semi-final and rose splendidly to all the demands that the occasion presented to win by 0–8 to 1–2.

The Club conveys its gratitude and tributes to team manager John Kilmartin, his selectors and mentors for their excellent organisation and their time given to developing the football skills that were clearly evident in the five Feile games played out through the week-end. 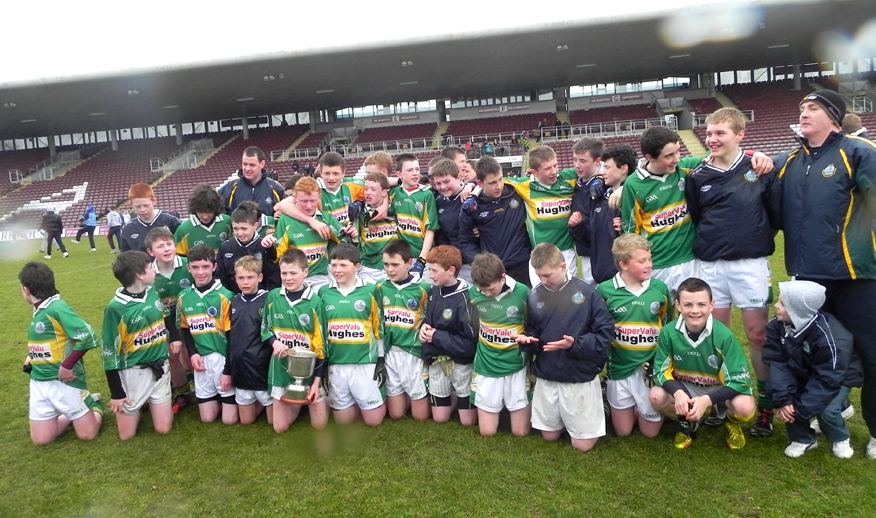