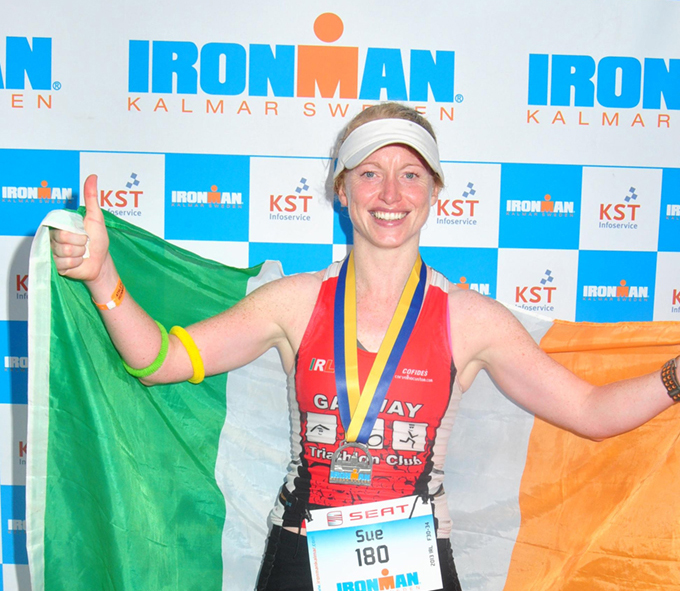 After 6 years of competing in triathlons I decided it was time to take on the big one—Ironman. Ironman consists of a 3.8km Swim, 180km Bike and if that’s not enough throw in a marathon on top (42km Run). A year ago I signed up to Ironman Sweden, that’s how long it takes to get the mind and the body ready for such a gruelling challenge, at times I did wonder if it was at all possible. In many ways I signed up because I knew it would focus me to up my training to a pretty serious level. I was curious to see if my performance could improve, and with the mammoth task of completing all three disciplines in one day it would certainly test my strength, will power and determination. I pretty much put the entire year towards training, starting with base training from August–January—this included a sprint race in New York where I won second overall female. I trained religiously, early morning swims became a habit, where before I couldn’t wrestle myself out from under the sheets. Now I hopped out of the bed at the first sound of the alarm clock.

I have an awesome crew of friends and athletes to train with in Galway, they gave up early morning sleep-ins to join me on the bike at weekends, swam in storm-like conditions in Salthill to help me reach the distance with ease and pushed me to faster levels of running than I had ever done. In January I started my 30 week Ironman training programme—this became my Bible. As my training increased, so too did my appetite and thanks to Mike my Fiancé he took on more of the cooking so I could train (& rest!) more. Four of us were signed up from the Galway Tri Club (Deirdre, Kieran, Aidan & me) which was great in terms of training and support. Over the year I had two ‘warm weather’ training camps one in Spain and one in California which was great for huge hills and getting the body used to training in warmer temperatures. I was hugely lucky in that I managed to get very few injuries, mainly from training smartly, researching thoroughly how to keep good form on the run, bike and swim and doing lots of maintenance stuff along the way. I also made sure to relax and enjoy the whole process, and not to take it all too seriously!

I only did one other race this year and knew all the training was starting to pay off when I came third in it—the double Olympic distance triathlon in Athy in June. My capacity to push myself was increasing and it was nice to see the dedication to the plan reaping rewards. As the final few weeks approached a delicate dance of excitement and nervousness kept me focused and then as the day itself approached it was like turning up to your exams, all the work is done and there is nothing else you can do now except relax, execute the plan and hope for the best. 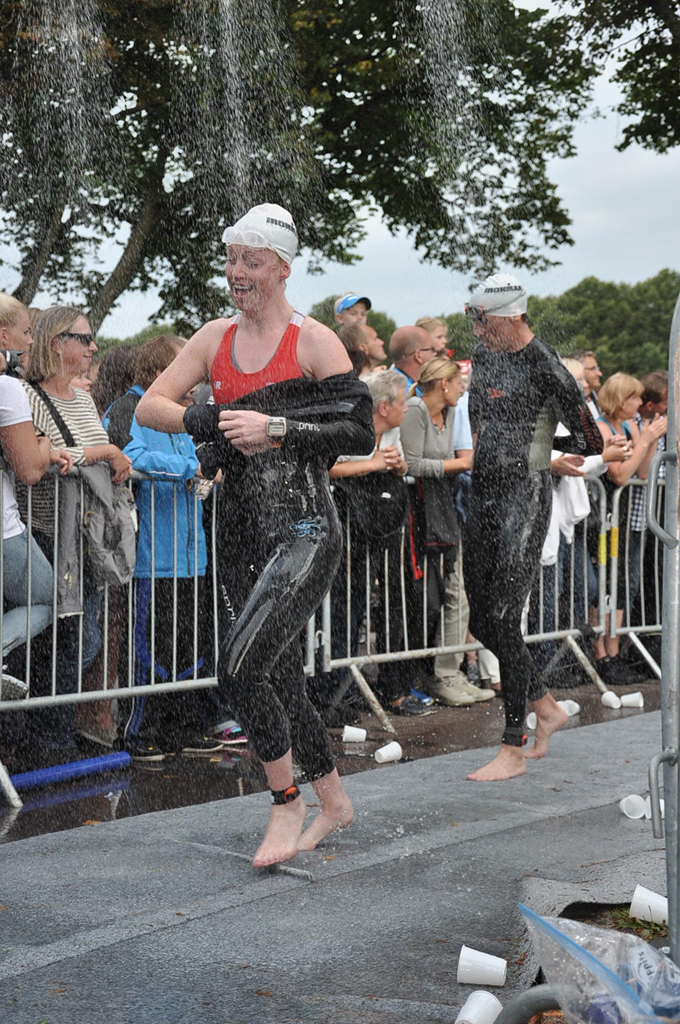 On the day itself it started out with breakfast after 4am. As we got ready for the swim start, I got a bit emotional saying goodbye to Mike, the bottom lip quivered a little and the magnitude of what I was about to undertake hit me. Breathing deeply I lined up for the swim start looked out at sea and found my hands clasped together hoping that it would all go well. The pastor gave us a beautiful send off and included the lovely Irish saying ‘may the road rise up to meet you, the wind be always at your back…’ to which I could almost feel my goggles start to fill up with tears.

When you make it to the start line in Ironman, it is probably the most emotional feeling ever, I absolutely could not have made it there without the support of so many people and the massive well wishes of each person that thought I was a little bit mad. From family, friends, relatives, training buddies, work colleagues, fit magazine followers to physios, massage therapists, the guys at Base2Race, coaches, everyone that took an interest, the charities I was fundraising for (Foróige & Alan Kerins Projects) I could feel each person’s presence as I hit the starting line and I so wanted to make it home for each one of them. It was truly an awe-inspiring feeling to have so many people behind you.

The swim, turned out to be nothing short of a punch and kick fest. This bit I knew was going to be tough. I kept the head down and tried to keep as calm as possible as all hell broke loose around me with 2000 athletes fighting it out to complete the 3.96km swim. My goggles got knocked a few times, especially at the buoys and as we swam under a bridge where it got quite bunched up. It was certainly tough but I swear my training in Tae-Kwon-Do came to the fore there, and I was not delicate about keeping my place and not being hammered. I was really happy with my swim time 1 hour 23 mins, particularly as the course was longer than expected. I hopped out and sped my way through T1 (transition), eager to get on the bike. There is inevitably a bit of competition between us triathletes so I was happy to be out of the water before my friend Deirdre, though I know she’s a stronger biker than me, it felt good to be ahead, even just slightly. 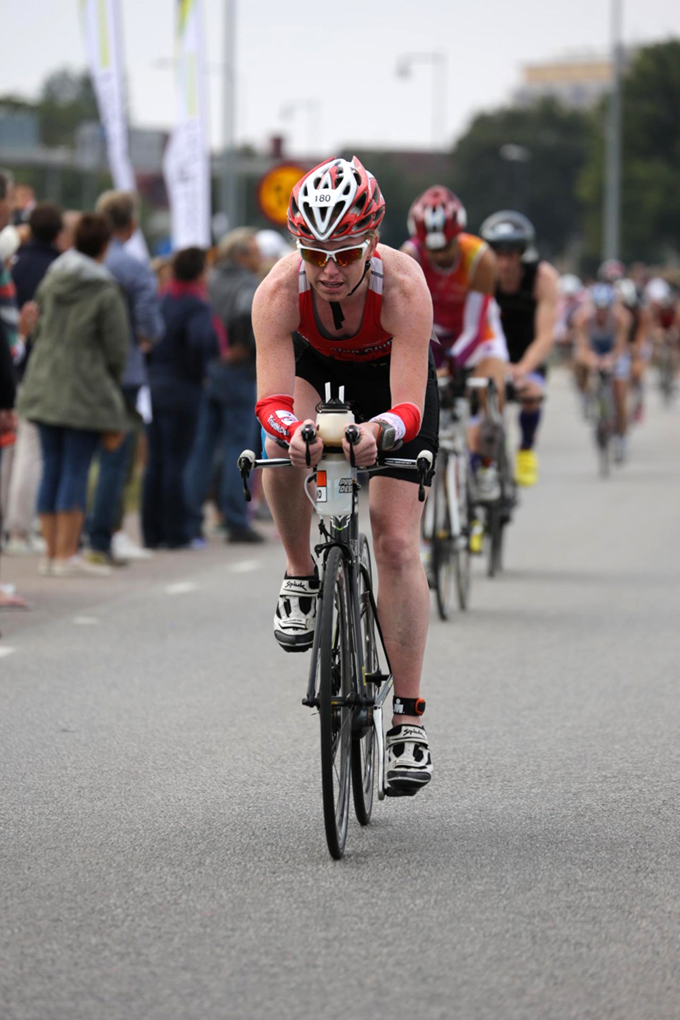 The bike was quite nice, and it started out of Kalmar and up over a 6km bridge. This was a little scary with a crosswind lifting me and my bike a few times. The landscape on Oland was quite pretty and the support from the local Swedes was simply amazing as they came out to support in their droves, having picnics and parties on the side of the road and calling ‘Heja’ (go, go) as we passed by. The first part was tough enough as we had a headwind of 27kph. I passed out Kieran and Aidan on the bike which I was a little surprised but very happy with. I did push it and tried to keep an average pace of about 30kph up.

Several times throughout the day I thought of my family and friends all tracking my progress on Ironman’s athlete tracker—this meant I never felt alone as so many people were rooting for me. Coming back up the island was a bit easier as we had it nicely at our backs until we turned to get a crosswind again which slowed me down massively. We had another 60km to do on the mainland, which started with the wind at our backs but left us with a tough finish heading back into the wind and getting tired. I was delighted with my bike time—6 hours 6 mins, averaging 29.7kph—pretty great especially with the wind. 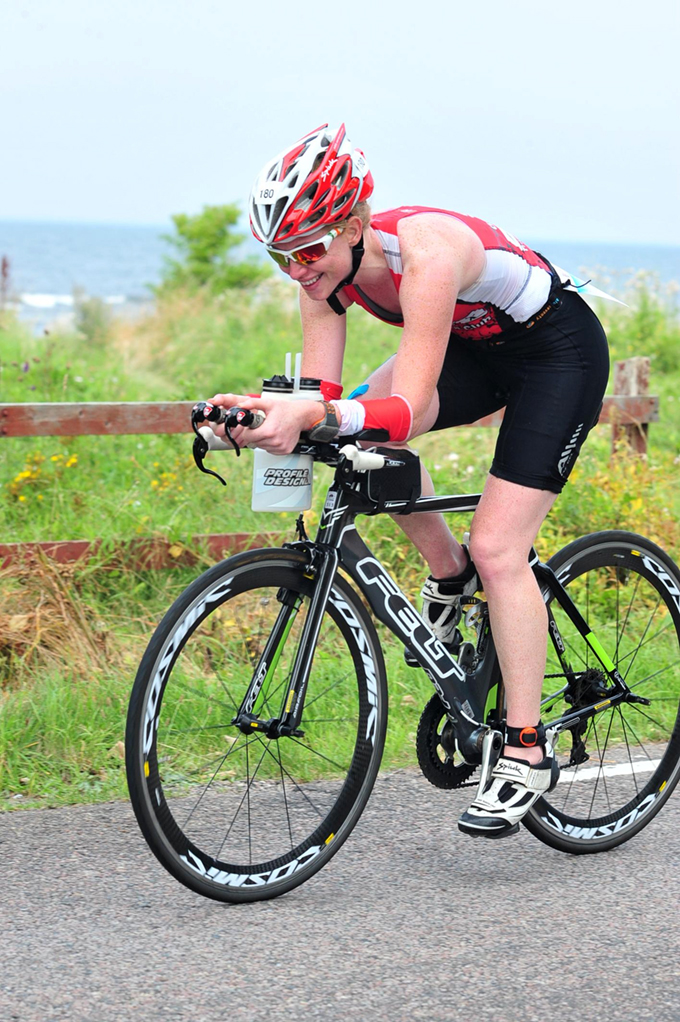 Getting off the bike my legs felt completely stiff and I wondered how they would cope with starting into a marathon. I took my time in T2 and had a full on conversation with my legs to convince them that they were well able for what I was asking of them next. I reset my watch and headed for the exit of T2. Once I hit the timing mat I launched into a nice pace and headed out on the first of three laps of the run course. I was proud of my legs keeping up their end of the bargain as I kept a good pace of about 5min/km on the first few kilometres. I eased up a bit then and took each 10km as its own.

I ran well, reminding myself continually that ‘I Love Running!’ and keeping good form with loose legs and arms. There were a few kilometres in the middle I slowed down more than I wanted to, but the body was tiring from being out all day and it was incredibly hot. Running through Kalmar town was amazing—the support was unbelievable and with huge groups of people chanting my name I dug deep and picked up the pace. There were a few times on the run I did ask myself ‘why are you doing this?’ to which the only answer that came was ‘to see how strong or how weak I am’. Once I got to the last 10km though, I knew without a doubt that I could complete it. What a feeling—so I started to pick up the pace and was amazed by how strong I felt. 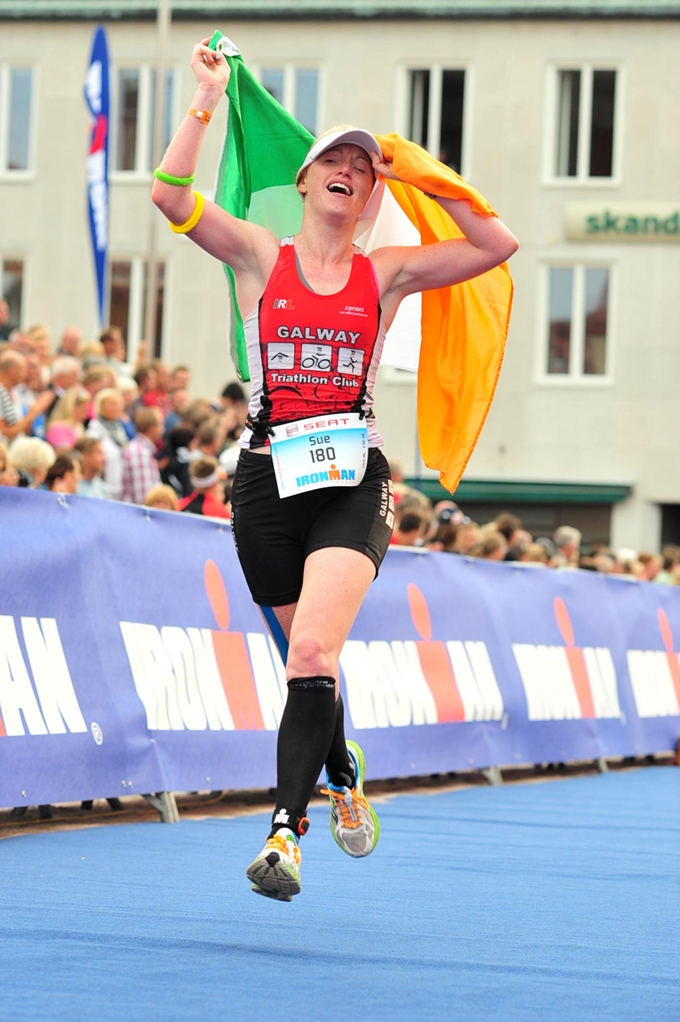 I will never forget the feeling of the last 2–4km running through the town and towards the finish, it was truly amazing. Mike handed me the Irish flag as I ran towards the finish line to the cheers of the crowd and the lovely words ‘Sue Redmond, you are an Ironman!’ I completed my marathon in 3 hours 55 mins—which is really a super time particularly after the bike and the swim. My overall Ironman time was 11 hours 35 mins which is awesome! My fellow Galway Tri Club athletes also had great races Deirdre Hassett (10 hours 58 mins), Kieran Whyte (11 hours 40 mins) and Aidan Currie (12 hours 51 mins), fab times all round!

I have to say a huge and massive thanks to everyone that supported me, particularly my family, relatives, friends, training buddies, coaches, physios and most especially Mike—I would not have made it here without each one of you. It has been the most humbling experience to know that so many people were there for me willing me forward, I could feel it every step of the journey which was absolutely amazing, THANK YOU! I would absolutely recommend if you are thinking about taking on a project, running a 5k, climbing a mountain, travelling overseas, learning to swim, do it.

Life is short, and in other ways life is long, but quite certainly time will pass and by creating experiences that push you out of your comfort zone they will leave you with an amazing tapestry memories and treasures beyond your deepest expectations!