This was the first round of the 2014 Senior Hurling League and both Killimordaly and Carnmore would want to get their league campaign of to a good start. It was Killimordaly who started brighter and took the lead with points by Brian Burke (free) and a second by James Daly. A nice move between Barry Hanley and Kevin Killilea saw Kevin score a brilliant point. Kegan Fox scored a great point from the half way line following a neat pass from Shane Quinn. Killimordaly scored the next two points. Then for Carnmore John Paul O’Connell took a quick free to Alan Traynor who scored a great point. But soon after, Killimordaly cancelled it out with a goal and it was 1–3 to 3 points to Killimordaly. Carnmore scored 2 points without reply, this was cancelled out by 3 points from Killimordaly. From a Carnmore puck out, Barry Hanley won the breaking ball and ran through the middle, before passing to Alan Traynor who scored a goal. It was now 1–5 to 1–6 to Killimordaly, before half time Killimordaly scored a goal and 4 points without reply so going in at the break it was Carnmore 1–9 Killimordaly 2–10.

Killimordaly, with the wind behind them, started the second half brighter of the two teams with a quick point from play, but Carnmore quickly bounced back with a point from a free by Barry Hanley. That would be the only point Carnmore would get for the rest of the game as Killimordaly proved too strong and it finished with Killimordaly being the worthy winners.

Be in with a chance to get your Company name on the Carnmore Senior Jersey for 2014. Tickets for draw cost €100. €20 from every €100 collected will be distributed among the local Primary Schools to enhance their sporting facilities.

Membership fees are now due. Membership paid before March 31st allows you to vote at the AGM and also enter into a draw for All-Ireland tickets should Galway qualify. Many thanks to all who have paid membership to date.

The last session of the indoor Winter Training Programme for juvenile members, for this season, took place on Tuesday last. It was a very enjoyable and worthwhile winter initiative by the Juvenile Club and thanks to all those who participated. A special thanks to Tom Cogley, Rita Healy, Mike Cullina and Sean Grealish who guided the lads through the routine each week. The Winter Training Programme will return in October/November 2014. 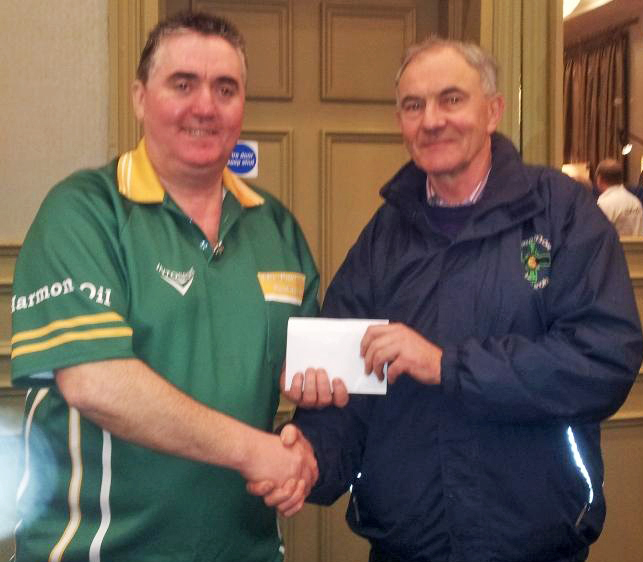 Joe Mullarkey, who is a member of the St Olaf’s Club in Dublin, bought a ticket for the Claregalway/Carnmore GAA Lotto in the Claregalway Hotel while attending a Feis locally. He is pictured, to the left, as Seoirse Morris from Carnmore Club presents him with his prize of €5,400. Congratulations Joe!

As the Hurling season is well and truly kicking off and following a series of thefts from GAA club dressing rooms, car parks and ground equipment stores, Galway Garda Crime Prevention Office is offering the following advice to help keep your possessions secure:

Please be vigilant both in Carnmore and if you are visiting other GAA Clubs, as sports clubs are being targeted by criminals. Any suspicious activity should be reported to An Garda Síochana at Mill Street—phone (091) 538000.