U15 B1 Hurling County Champions

Carnmore won the U15 B1 county final on Sunday 19th of October, beating Cois Fharraige on a score line of 2–12 to 1–7. The game was played in a wet and windy Turloughmore but that didn’t take anything from the game as both teams served up a great display of hurling. Carnmore, playing against a strong wind in the first half, were first to score, with Mikey Cullina grabbing the opening point. Cois Fharraige drew level with a point from a 65 and then took the lead with a well pointed free. The next score was a crucial score for Carnmore, as a shot for a point fell short against the wind and full forward Darren Grealish was on hand to score a goal putting Carnmore ahead 1–1 to two points. That was the end of scoring for Carnmore in the first half, as Cois Fharraige scored four points without reply, with two of the points coming from play. Cois Fharraige brought a half-time lead in with them 1–1 to six points.

Cois Fharraige started the second half as they finished, and were the first with a point coming from play, giving Cois Fharraige a three point advantage. Carnmore then got six points in a row coming from Mike Cullina, Darren Grealish and four points from Tomas Cogley (1f). Mikey Cullina kept the scores coming for Carnmore with a pointed 65. As the score stood at 1–8 to 0–7 points, and Carnmore in the lead, Conor Harte scored next for the men in red with a well taken point from play.

Carnmore weren’t finished yet, with left corner forward Tomas Cogley adding two frees and one point from play that was soon followed by a goal from Shane O’Gorman. Cois Fharraige fought hard and replied with a goal but it was too late for them. It finished Carnmore 2–12 Cois Fharraige 1–7. 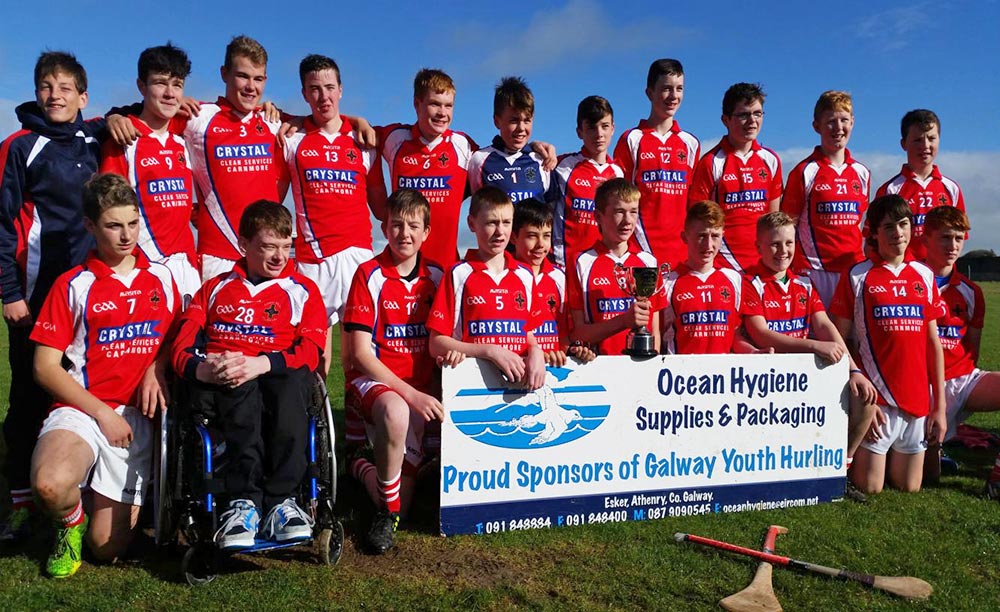 After the game, it was Captain Niall Feeney who collected the cup for Carnmore and the Man of the Match award went to Goalkeeper, Conor Flaherty. This was another great all round team performance with the full back line of Eoin Clarke, Brian Fox and Tom Hopwood keeping it safe and secure around the goals. The Carnmore half back line of Aodhan Fox, Robert Healy and Cian Heery kept it tight in the backs as they had all year. The midfield pair of Niall Feeney and Daniel Prior worked hard throughout and could always be depended on. The half forward line of Mikey Cullina, Shane O’Gorman and Harry O’Gorman, was a half forward line that showed great partnership. Full forward line was Tomas Cogley, Conor Harte and Darren Grealish and they played amazing hurling all year. The subs as well, when they came on in each game, played brilliantly. They were Colm Healy, Conor Finnerty, Harry Bradshaw, Keith Field and Shane Lawless. A great management team of Tom Cogley, Eamon Fox, Thomas Grealish and Rita Healy have done a fantastic job with the team all year.

U15 Sponsorship
All the lads on the U15 Panel received a Training Top, Togs and Socks prior to the Final on Sunday last, which were sponsored by local businesses.

U15 Squad Mentors
A great debt of gratitude and appreciation is due to the mentors who gave unselfishly of their time and energy in their efforts to bring the U15 Carnmore Hurling Squad to a County Final. Winning it was a dream. 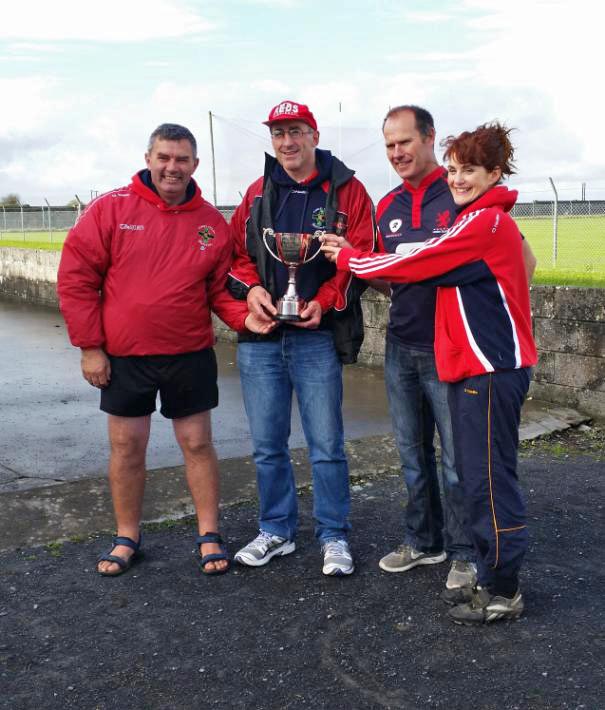 Pictured are the U15 Squad Mentors, Tom Cogley, Thomas Grealish, Eamon Fox and Rita Healy, with the much coveted cup.

Their belief in the squad was relentless and this belief was instilled in the squad throughout the year. Well done on a great year’s work.

U13 A Camogie County Champions 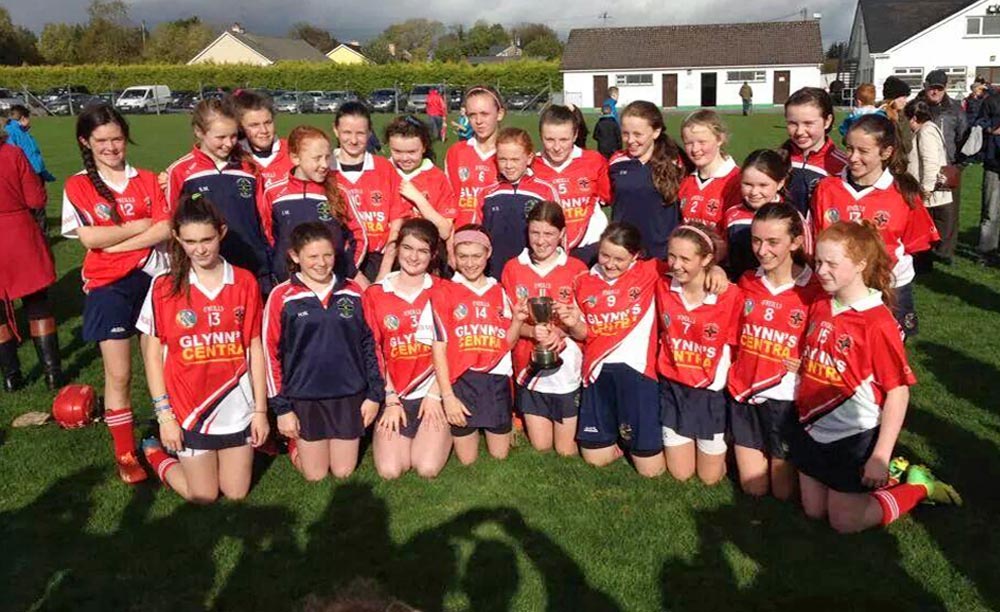 Congratulations to the U13 Camogie Girls who won the County A Final on Sunday last, 19th October, beating local rivals Turloughmore 2–3 to 0–1. Well done Girls!

Poker Night
Texas Hold’em Poker Night is being held in the Arches Hotel on Friday next, October 31st. Entry €20 with buy back of €10. All funds raised will to to Carnmore Hurling Club. Tickets are available from Kevin Shaughnessy, Club Treasurer on 086 3542526 or by emailing [email protected]. Also, keep an eye on www.carnmore.net and Carnmore Squad Facebook page, for further details.

70th Anniversary Mass
A Mass will be said in Claregalway Church for all deceased and present members of Carnmore Hurling Club and to mark the 70th anniversary of the Club, on Thursday November 20th at 7.30pm.

Club Calendar
A Club Calendar to mark the 70th Anniversary of the Club will be on sale at the end of November.

Turkey Trot
The annual 5k Turkey Trot will be held on the 7th of December. Further details will be available on www.carnmore.net and Carnmore Squad Facebook page.