Mozart was only able to complete the orchestration of the opening movement, Requiem Aeternam, before his untimely death in 1791. There have been many completed orchestral versions of Requiem, the one most commonly performed by a contemporary of Mozart, Franz Xavier Süssmayer. Gregory Cukrov, SMG 2013 Visiting Artist, completed this new orchestration, based on a string quartet version by Peter Lichtenthal, a contemporary of Mozart’s, in time for this year’s SMG 2013 International Festival in Ennis. On the same programme will be a recently discovered Handel Alleluja chorus which was only performed once in 1735. Organist and Musicologist Hugh McLean unearthed this extremely rare version of Handel’s oratorio Athalia which concludes with his Organ Concerto in F, Opus 4, No. 4. The final movement is most unusual in that Handel added, for this one performance of Athalia, half as much again in an Alleluja for chorus plus two horns, based on the instrumental music of the beginning. Organ soloist for this landmark event for SMG will be Mark Keane with the Chamber Orchestra and Choir conducted by Norman Nelson, one of the founding members of the Academy of St. Martin in the Fields Orchestra in London.

This year’s SMG Festival opened on Monday, August 5th in Claregalway Castle with a day-long 20th Anniversary Gathering of musicians and families from every continent, many of whom have attended SMG at least once over the past twenty years. On Wednesday, August 7th they will be traveling to the Raheen Woods Hotel in Athenry where the programme will include Beethoven’s Symphony No. 6 with the orchestra conducted by Keith Pascoe, the Tchaikovsky Rococo Variations for cello and orchestra, with soloist Karen Kang from Korea and Canada and—of course—a stunning new orchestra/chorus version of The Fields of Athenry! 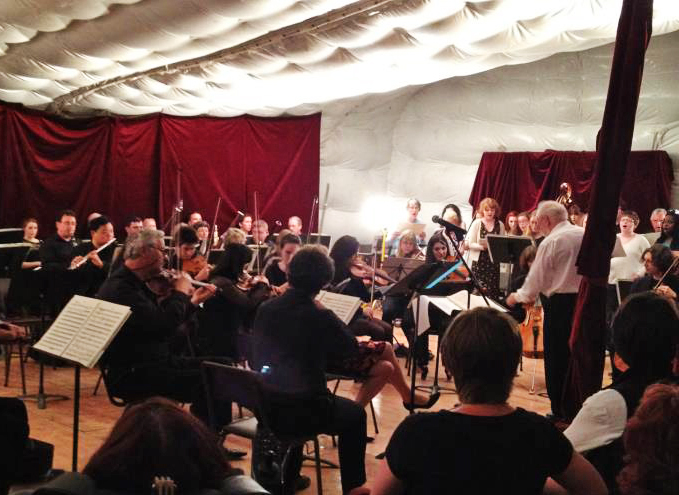 This year’s SMG Youth Opera Theatre’s production of The Green Children by Nicola LeFanu, will be performed at Claregalway Castle on Friday, August 9th at 8pm. This is one of the most powerful operas ever composed for children and adults with beautiful music and a very moving and dramatic story line. Based on a 12th century story by the chronicler Ralph of Coggenhall, the opera opens when a large number of villagers and village children find two green children lost in the woods. The villagers are initially fearful and antagonistic to the strange looking children, who today would be described as refugees from an ‘ethnically visible minority’. This initial prejudice dissipates when the Green Boy dies and the Green Girl tells the amazing story about the green world and how she and her brother found their way to middle earth. The opera concludes with a total acceptance of the Green Girl by the villagers and her decision to marry Guy, a young man from the village.

SMG performances will conclude with a 20th Anniversary Gathering Farewell, on Saturday, August 10th in Claregalway Castle. This will be an all-day family event with music for and including children in the afternoon and an evening orchestral concert which will include Vivaldi’s ever-popular Four Seasons, with violin soloist Keith Pascoe from Cork, and a requested repeat performance of A Midsummer Night’s Dream. A picnic barbecue on the beautiful AnnaCarriga Lough Derg lakeside has been arranged between the afternoon and evening performances.